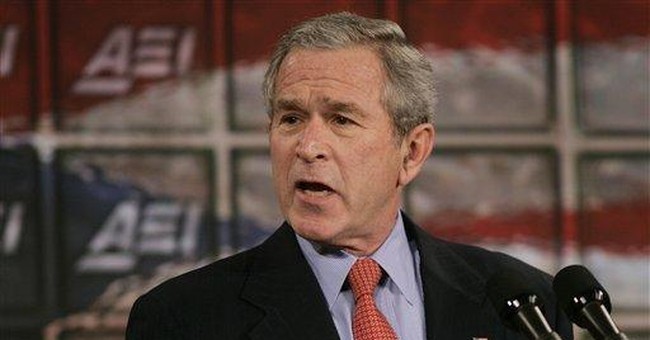 As anyone remotely into New Age voodoo knows, the Chinese symbol for crisis is said to consist of the words “danger” and “opportunity.”

Not conversant with Chinese, we must accept this derived wisdom on faith. But if that is indeed the symbol, it applies perfectly to the situation the Bush administration faces in the rapid escalation of gas prices.

A less elegant way of putting it is that the best cure for a headache may be a broken foot. In the pain in one’s lower extremity, one forgets the discomfort up above.

Bush is never going to solve the massive negatives he is suffering as a result of the war in Iraq. His best shot is to distract Americans with a stellar performance in a new crisis, and the rise in gas prices comes along at just the right time.

The key is to seize the day. The president’s pathetically weak warning that we are facing a long, hot summer and that gas prices might rise even more sounds helpless and removed. Instead of lamenting high prices, he should pounce on the opportunity to lead America away from an oil-dependent economy.

Using the sense of danger and vulnerability Americans feel as prices drive their family budgets out of whack, he can energize and lead the nation in the way that he did so successfully after Sept. 11.

He should address the nation on television and call on Congress to act quickly on massive new investments to increase the production of alcohol-based fuels and cars that can accommodate them. He should plunge ahead in the development of hydrogen-fueled cars and the conversion of gas stations to provide hydrogen. He should call for major new facilities to produce hydrogen and the rapid production of vehicles that can run on it.

Where private-sector investment is needed — as in the production of the cars — he should incentivize it through tax policy and require it through regulation. Where public investment is involved, he should build up our infrastructure rapidly with a massive outlay of funds.

We live in one of those times when a major public investment is needed. It is time for the same sort of commitment to infrastructure change as animated the canals and railroads of the 19th century and the superhighways and fiber-optic networks of the 20th.

The current slow pace of expansion of alcohol-based fuels will take decades before we are fully converted away from oil. But the science is there and the technology is being refined to make the production of alcohol fuels ever more efficient. And hydrogen is not far behind.

The feds need to blaze a path in using natural gas, electrolysis and biomass (including landfill gas) to make hydrogen. Washington should pay gas stations to convert their facilities to make possible the widespread use of alcohol and hydrogen fuels.

In the last analysis, Bush invaded Afghanistan and Iraq after Sept. 11 because the energy and focus that horrible day made it possible to do what had needed doing for decades: to clean out those two cesspools of terror and repression. Now a crisis has again awakened the nation, and the president should seize the moment to lead America toward a solution.

If there is one conclusion all Americans can embrace, it is that only by converting from oil dependency can we hope to tame Middle East terrorism. We must stop paying terrorists at the pump even as we pay to repress them with our taxes. If the logic of global climate change leaves this president unmoved, then at least the dire economics of gas-price inflation and the global realities of petro-politics should push him in the right direction.

Bush will never win on Iraq. That is not to say he will never win in Iraq. There is probably a pretty good chance that U.S. casualties will drop and that we will be able to withdraw substantial forces. There is even some chance that in the coming years violence will abate in that torn nation. Possibly even democracy can take hold. But Bush’s presidency will not live to see that outcome, and Iraq will still look like a mess on television even if Americans are less and less directly threatened.

But to stop his administration from dissolving into irrelevance and to hold majorities in the ’06 election he must act to create a second-term cause. He’s tried Social Security and immigration and run into a wall on each. But the field is pretty clear, should he decide to launch a bold energy initiative.

If it is truly bold and all encompassing, he may yet salvage his second term. Right now he looks like a one-term president in his second four-year stint.