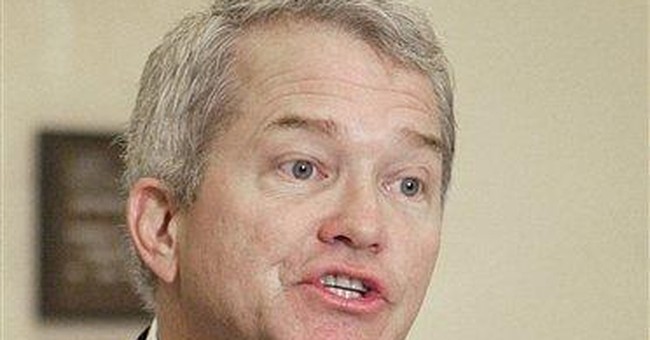 Mirror, mirror on the wall, who is the ugliest of them all?

The most recent Fox News poll indicates that Americans see the Republican congressional majority as materially more corrupt and more responsible for the current spate of scandals than the Democrats. Indeed, the building sense of popular anger against the GOP resembles nothing more than the last congressional scandal — the bounced-check congressional bank affair of 1991 — in its political impact. But that scandal paved the way for Newt Gingrich’s takeover of Congress three years later. This scandal may undo the Republicans.

Generic cynicism about Washington is nothing new. Fox News poll respondents said that they felt that “most elected officials in Washington make policy decisions or take actions as a direct result of money they receive from major campaign contributors” by 65-21. Nothing new there. Because distrust of Congress is usually visited equally on both parties, it normally has no political impact.

But this scandal is different. With Republicans so completely in control of the government, this scandal is theirs. Asked “which political party in Washington” is “more corrupt,” respondents to the Jan. 11 survey said the Republicans are by 33-15. (Forty percent said both were equally dishonest). Independents, the vital element in any potential Republican majority, rate the GOP as the more corrupt by 23-5.

The scandal also seems to be spawning a reaction quite different from the usual cynicism in that it appears to be visited on each district’s local representative. While voters typically deride Congress as a whole, they usually speak highly of their own members. But not this time. Asked if “your own congressional representative has ever taken money or things of value in return for voting a certain way,” voters said yes by 42-33, with Democrats and Republicans equally likely to think so.

Because this scandal is both partisan and local it will have a searing political impact. Nor should the recipients of Abramoff’s dubious generosity dismiss their acceptance of his donations by saying it doesn’t matter because everybody took his money.

Those who did get contributions from him are in for an Election Day surprise. Forty-four percent of the Fox News survey respondents said that if “an elected official from your state took a campaign contribution from Jack Abramoff or organizations that he represented” it would be a “major” factor in deciding whether to vote for him in the next election. Even 31 percent of Republicans felt this way.

Washington scandals come and go. But, about every decade or so, they metastasize into massive national affairs that embrace an entire political party. Republicans were victimized in 1974 by Nixon’s misconduct. Democrats kept Congress in 1992 after the 1991 check-bouncing scandal, but they did so because so many of their old bulls retired. In their places, Bill Clinton’s election swept into office young saplings who succumbed to the partisan wave of 1994, a wave kindled equally by disgust with Clinton and with the Democratic permanent Congressional majority.

The 2006 elections look to be another of these decadal bloodlettings, victimizing, this time, the Republicans.

What can the GOP do to prevent it? It has to start by not coddling its members who are in the cross hairs of this scandal. But shedding individuals will not buy the party a pass from what voters see as an epidemic of scandal. Only real reform will suffice.

Obviously, Congress needs to ban lobbyist-sponsored travel. It was voter anger over taxpayer-paid junketing that spawned these free trips, as legislators looked to lobbyists rather than Uncle Sam to subsidize their vacations. But now the voters are as angry about lobbyist-paid trips as they were over funding the travel themselves. The trips have to go.

But the more serious reform would be to ban earmarking on appropriation bills. Voters have long since understood that it is a fiction that a legislator is fighting for a specific earmark to help the district. They know he is really doing it to get campaign contributions. Once the Supreme Court took away the president’s ability to use the line-item veto on spending bills — a key provision of the Contract with America that was enacted with Clinton’s approval — the natural next step has been to ban earmarking. The practice invites the kind of corruption that is crippling Republican chances in the next election, and it deserves to be ended.

Will the scandals translate into the loss of Congress by the Republicans in 2006? The generic 13-point Democratic lead in Congressional ballot would suggest that it might. Can popular revulsion overcome even Tom DeLay’s gerrymandering? You bet it can!