Marriage at Notre Dame: From Sacrament to Sacrilege 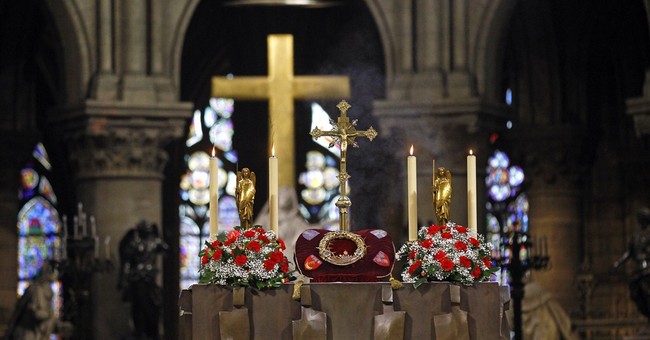 The National Catholic Register broke the most shocking cultural news of the week:

"A group of students at the University of Notre Dame has generated a campus-wide controversy by advocating that marriage between one woman and one man is better suited for children than same-sex 'marriage.'"

"The group -- known as Students for Child Oriented Policy (SCOP) -- elicited negative letters to the campus newspaper and prompted hundreds of students to sign a petition calling upon the university not to recognize it as an official campus club."

What comes next may not be surprising, but it remains gasp-worthy: Notre Dame refused to recognize the group favoring what we now know as "traditional marriage" as an official campus club. Why? The administration offered a thin excuse, saying the new club would duplicate the mission of two other campus groups that promote Catholic doctrine -- one of which, it turns out, hasn't updated its website since 2005. Meanwhile, according to SCOP's prospective president Tiernan Kane, his group doesn't identify itself with a specifically Catholic mission, coming together instead as a non-sectarian effort to "focus on public policy as it relates to issues that specifically affect children."

The Register reported that planned club activities would have included "presentations on Common Core and Indiana education policy, marijuana's effect on young people's brains, the United Kingdom's anti-pornography policy and the problems associated with no-fault divorce." The club's position that traditional marriage is good policy is what drew campus fire.

There's a lot here, so let's take it from the top. First, we have just learned that on the campus of one of the leading Catholic universities in the country, the concept of same-sex marriage isn't just popular, it's entrenched to the point where it is controversial to prefer the traditional model -- even to argue that heterosexual marriage is better social policy for children. In fact, the belief that a child is better off with a mother and a father rather than two mothers or two fathers is so unpopular that 630 students signed their names on a petition to prevent it from being promoted as an official campus club.

So much for the ancient consensus on heterosexual monogamy from which Western civilization evolved. That's out the window at Notre Dame. Indeed, the Register further reported that a university official "expressed disapproval" over the prospective club's call for Notre Dame President Father John Jenkins to "make a clear stand" for heterosexual marriage. Once upon a time, of course, heterosexual marriage didn't require a university president or anyone else to make a "clear stand." Today, a leading Catholic academic doesn't want to come out as its supporter, let alone advocate.

This topsy-turvy episode at Notre Dame marks another defeat in what used to be thought of as the culture wars. Once again, elites have deserted the religious and societal bastions even as foot soldiers still maneuver. What is even more dispiriting to watch than the increasing "inclusion" of homosexual and lesbian unions in the definition of marriage -- and I expect one day that polygamous and perhaps even incestuous unions will similarly be normalized -- is the demonization of traditional belief.

The Register story went on to describe a conference SCOP staged last month on the definition and importance of marriage, featuring conservative legal and religious experts. "Prior to the event," the newspaper reports, "a SCOP member wrote a letter to a campus newspaper, The Observer, asking that students approach the April 3 conference and SCOP with an open mind, in the same manner as they approached" the attempts to found Notre Dame's gay-straight alliance club, PrismND, in 2012." PrismND is Notre Dame's GLBTQ group. (The acronym stands for Gay, Lesbian, Bisexual, Transgender and Queer.)

Notre Dame has an open mind, all right -- at least when it comes to the GLBTQ group. That club received official club status. Not so SCOP. "It's the new political correctness," explained Patrick Reilly, president of the Cardinal Newman Society, a traditional Catholic group. "Very often the same students who scream censorship in nearly every other instance are the ones who would silence those who promote Catholic teachings. Those who advocate difficult teachings are shunned or ridiculed."

The best and brightest call that progress.