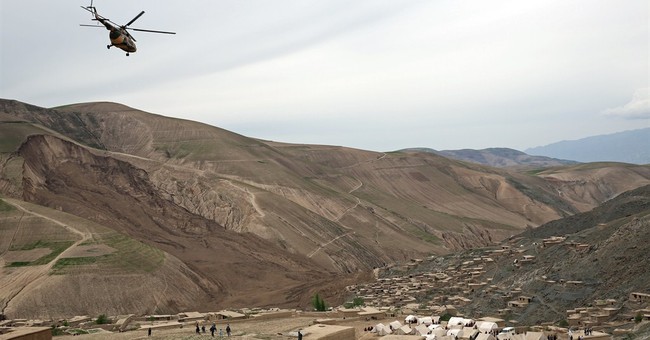 John F. Sopko, the Special Inspector General for Afghanistan Reconstruction (SIGAR), may have taken Uncle Sam and shaken him by the lapels this week, but the media missed it. Americans, however, need to hear how Sopko, in an address at the Middle East Institute in Washington, D.C., laid out why Afghanistan remains "relevant" -- and a cause for outrage -- for every U.S. taxpayer and policymaker.

In short, Afghanistan is on life support, and Joe Citizen is its permanent IV. From your pockets, Uncle Sam has taken $103 billion to build Afghanistan -- so far. By the way, that figure doesn't include the costs of war-making. To put it in context, as Sopko says in the text of his speech, "that is more money than we have spent on reconstruction for any one country in the history of the United States." That goes for the countries in Europe that American money rebuilt during the Marshall Plan after World War II.

"We are spending more money this year on reconstruction in Afghanistan than we do for the next three countries combined," Sopko continues, referring to Israel, Egypt and Pakistan. Eighteen billion dollars are currently in the pipeline, he says, and between $6 and $10 billion is "promised annually for years to come."

The grotesque scale of all of this "aid" becomes even more striking on realizing that Afghans, per capita, earn $687 per year. Mammoth U.S. reconstruction programs thus place "a financial and operational burden on the Afghan economy that it simply cannot manage by itself," as Sopko puts it. Consider that Afghanistan's GDP in 2012 was approximately $20 billion. "That same year," Sopko says, "U.S. reconstruction funding amounted to $15 billion -- 75 percent of Afghanistan's GDP." Again, these massive sums don't include war costs.

For example, the projected costs of supporting Afghan security forces come to $5 to $6 billion per year, Sopko says. "At these levels," he explains, "if the Afghan government were to dedicate all of its domestic revenue toward sustaining the Afghan army and police, it still could only pay for about a third of the cost. "

Meanwhile, there are civil servants to pay, and roads, schools, hospitals and other infrastructure that, of course, require more money to be maintained. Where is that money supposed to come from? From U.S. taxpayers, of course. Sopko calls us "international donors," but "international debtors" is more like it.

SIGAR, on the job since 2008, has produced 118 audits and inspection reports, and made 23 quarterly reports to Congress. Nothing seems to penetrate the Capitol dome, however. This would account for the remedially surreal and Mr. Rogers-like sound of the lessons Sopko offers for next time -- if, heaven forfend, there is a next time.

"First, we must consider a country's ability to sustain the assistance we provide."

Just think about the fact that the inspector general even has to articulate such a basic premise in the first place. It suggests that the U.S. government did not consider the ability of Afghanistan, one of the world's poorest countries, to sustain the gargantuan projects and programs Uncle Sam was using -- let's be real -- to bribe Afghans out of supporting the "insurgency." Thus, Afghanistan becomes U.S. taxpayers' latest federal entitlement program.

"Second," he says, "reconstruction in a conflict zone is inherently risky."

Really? You mean it's not like building a skyscraper in Manhattan -- as the Bush and Obama administrations appear to have believed? The U.S. "reconstruction" strategy (and I use quotation marks because in Afghanistan's case, "reconstruction" was usually first-time construction) was this: On seeing the infidel's generous and fabulous "nation-building" intentions, the Islamic Republic of Afghanistan would instantly and overwhelmingly turn against and work against the local Islamic "insurgency."

For many reasons, a significant number of which are Islamic, this didn't happen -- no matter how much infrastructure, programs and stacks of cash Uncle Sam passed around. Meanwhile, we also believed if we ignored or, worse, accommodated and submitted to the role Islam plays in shaping, guiding, characterizing Afghan culture -- if we just turned a blind eye to Islamic laws against freedom of speech and freedom of religion, to culturally permitted pederasty, to Islamically correct child marriage and abuse of women -- then the Afghans would, too.

Keep the money flowing -- and never mind the endemic corruption in Afghanistan that SIGAR John Sopko has been uncovering. Congressional oversight will get to the bottom of this reckless mess.

Oops, I forgot -- only real democracies have that.