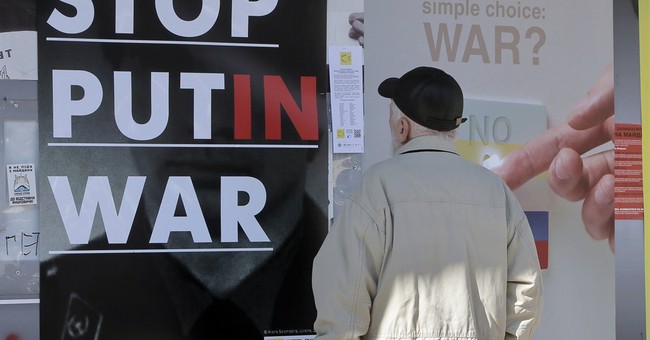 Reading as widely on Ukraine as possible, I kept wondering why the story wasn't making sense. Then I realized the buzzwords used to tell the story weren't adding up.

Here's what we hear: Democracy in action drove a corrupt leader, whose snipers had fired on protestors in Kiev, to flee Ukraine. Enter Russian forces into Crimea, Ukraine. The "Free World" must now take its stand against the "Russian Bear" for freedom, sovereignty and rule of law, and reject the outcome of an "unconstitutional" referendum in which Russian-majority-Crimea is expected to vote to join Russia. Meanwhile, please inject billions of Western taxpayer dollars and Euros into Ukraine.

Mute the rhetoric, though, and it's hard not to notice that last month, a violent mob and rump parliament ousted the elected Ukrainian president in another "unconstitutional" process better known as a coup. It's a coup even if Vladimir Putin calls it one, and even if Barack Obama calls it "standing up on behalf of democracy."

In this way, "democracy," too, becomes another buzzword. "Democracy," good; "Putin," maybe worse than Soviet-era dictators who came before him. (Romanian Communist defector Lt. Gen. Ion Pacepa went so far as to write online at The Blaze: "Russia's gradual conquest of Ukraine has become the most dangerous challenge to peace and stability in the world since the end of World War II.") If "democracy" vs. "Putin" is a struggle of the buzzwords, what is it that Washington and Brussels, capital of the European Union, are really supporting in Ukraine?

To understand this -- and I feel I'm still at the beginning -- it's important to see the players for who they are, not for who they are reputed to be. The buzzworded story sticks only if we respond to injections of Cold War rhetoric by seeing Barack Obama as "Leader of the Free World" -- not as a president who has brought U.S. foreign policy into closer alignment with jihadist movements worldwide, while further socializing the U.S. at home, and seizing non-constitutional powers for the executive branch.

We also have to regard the countries of Europe and NATO as "free" -- that is, not "integrated," and often not freely so (meaning not by national referendum), into the European Union's one-world-fits-all, socialistic superstate, which is run by unelected, unaccountable ministers, many of whom actually cut their political teeth in Communist parties.

We also have to believe that "freedom," "sovereignty" and "rule of law" -- what Washington and Brussels say are at stake in Ukraine -- are not just bursts of propaganda shot off to inspire good people to hand over those billions of taxpayer dollars and Euros for Ukraine through the International Monetary Fund.

Weirdly little-known fact: The IMF is the post-World War II brainchild of one of Moscow's most important and successful Communist agents ever, Harry Dexter White. For the matter, the United Nations was also fostered by another Soviet agent, Alger Hiss.

All of which is to say that there are more moving parts here than our limited stock of buzzwords indicates. More intensive scrutiny is surely needed -- and before we pony up again. Since 1991, the U.S. alone has spent $5 billion on building democracy and good governance in Ukraine -- and rampantly corrupt Ukraine still just had a coup.

Much remains murky, but one piece of the Ukraine story whose facts seem within reach concerns the coup's precipitous event: the shocking sniper attacks on people in the square in Kiev, which reached a bloody crescendo on Feb. 20, killing some 40 people out of the "heavenly hundred" who are believed to have died in all. Who is responsible?

Initial reports blamed the security forces of ousted President Viktor Yanukovych. Now, according to The Associated Press, the new authorities in Ukraine "have shifted their focus" from the Yanukovych government to Vladimir Putin's Russia -- "pursuing the theory," AP continues, "that the Kremlin was intent on sowing mayhem as a pretext for military incursion." Meanwhile, Russia, the AP reports, believes "the snipers were organized by opposition leaders trying to whip up local and international outrage against the government."

Russia's argument is bolstered by an extraordinary "intercepted" phone conversation. In the call, Estonian Foreign Minister Urmas Paet describes evidence from Olga Bogomolets, a noted Ukrainian physician-activist, to EU Foreign Minister Catherine Ashton. It suggests the same snipers were killing people from both sides -- policemen and protestors alike. The new government's health minister, Oleh Musiy, said much the same thing to the AP, which adds "that the similarity of bullet wounds suffered by opposition victims and police indicates the shooters were trying to stoke tensions on both sides and spark even greater violence with the goal of toppling Yanukovych."

Estonia's Paet continued, conveying his belief to the EU's Ashton: "There is now stronger and stronger understanding that behind the snipers ... it was not Yanukovych but it was somebody from the new coalition." In other words, some faction associated with the new government the U.S. and the EU are supporting. Estonia has since authenticated the call.

The cold-bloodedness of whatever party is behind such a bloody calculation is chilling, even as the question of responsibility has hot political ramifications. When it comes to spending billions to promote "European values" (another buzzword) -- let alone "freedom," "democracy" and "rule of law" -- a non-partial investigation into these events becomes essential. Buzzwords, meanwhile, are no substitute for the truth.