A Nation of Laws, Not Men, Must Impeach Obama 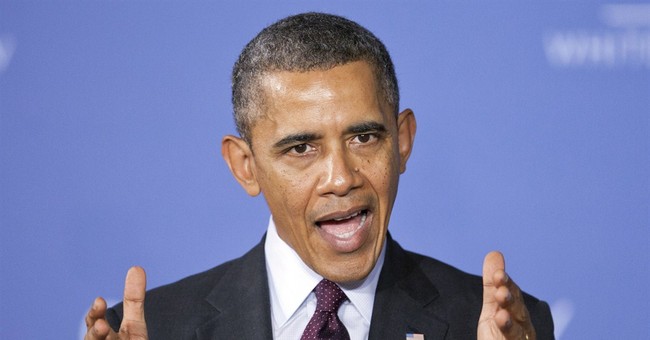 One of the hats I wear is that of Washington correspondent for Dispatch International, a European weekly newspaper co-edited by Danish journalist and historian Lars Hedegaard. The name may ring a bell with U.S. readers because last February, a man dressed up as a postman with a fake package tried to assassinate Hedegaard, a noted critic of Islamization and proponent of free speech, at his home in Copenhagen. International headlines followed.

One year later, Hedegaard lives under state protection and there have been no arrests. But that's not what this week's column is about.

A few days ago, Hedegaard wrote me with a new assignment:

"Would you write something about a disturbing phenomenon: the fact that Obama rules by decree and neglects the Constitution. How can this go on? Nixon was a complete amateur compared to this would-be Kim Jong-un. It looks like a coup d'etat. Nobody talks about it in Europe."

So that's what America looks like from 4,000 miles away.

Given the lack of context "over there," my overview had to start with the basics of Barack Obama's presidency: numerous unconfirmed "tsars" (like George W. Bush), sweeping executive orders and massive amounts of regulation. "I've got a pen and I've got a phone" is the way the president recently described his tools of power, noticeably omitting whether he also had a copy of the U.S. Constitution. By the time I'd recapped the so-called unilateral presidency for the European reader, I was newly aghast.

For many Americans, living through the Obama era day-by-day, executive order by executive order, 100 regulations by 100 regulations (there were 80,000 pages of new regulations in 2013 alone), our nation's transformation becomes so much enveloping static. Yes, there are shrieks and screams (over Obamacare's rollout, for instance), but mostly people seem to shut out the background noise of an aggressively collectivizing government doing business. Outrages against the Constitution clank and sputter -- What? The executive branch can't write legislation! -- but they never really backfire on Obama. His poll numbers dip, yes. White noise ensues.

Such ambivalence may stem from the fact that many Americans are not well educated about how our government of three co-equal branches is supposed to function. Confession: Despite private school and an Ivy League education, I didn't really get the picture until later in life.

Barack Obama, the government's chief executive, is seizing powers that belong to the legislative branch. He's not the first president to do so; not by a long shot. That's also part of the ambivalence problem. Obama fits an accepted historical mode of abuse exemplified, for example, by the even more dictatorial FDR. Meanwhile, as Obama's defenders correctly note, Obama, having issued 168 "decrees," ranks on the low end among modern presidents. What distinguishes Obama's fiats in our time, however, as Sen. Mike Lee, R-Utah, told CNSNews.com, is that Obama "has repeatedly made use of executive orders to change statute, to change law, to change legislation enacted by Congress."

A president can't do that. The crisis exists because the legislative branch is letting him.

The crisis is compounded because most of the media supports these seizures of power. The New York Times' take on the State of the Union address (Rush Limbaugh calls it the "State of the Coup,") is typical: "Taking the offensive by veering around Congress isn't new for the administration, but it is more important than ever."

"Veering around Congress" is a neat phrase for serial abuse of power. During a December hearing before a House Judiciary subcommittee on "The President's Constitutional Duty to Faithfully Execute the Laws," liberal law professor (and onetime Obama voter) Jonathan Turley stated: "The problem with what the president is doing is that he's not simply posing a danger to the constitutional system. He's becoming the very danger the Constitution was designed to avoid."

The president is quite open about his intentions. "Wherever and whenever I can take steps without legislation ... that's what I'm going to do," Obama declared in his State of the Union. The line received vigorous applause from Democrats in the House chamber. Yes, they support the president's agenda, but weren't they also applauding their own superfluity?

That's what I thought before I heard Rep. Sheila Jackson Lee, D-Texas, say that writing executive orders for the president to sign -- not writing legislation for Congress to vote on, mind you -- should be "our No. 1 agenda." The 10-term congresswoman, while launching the new and Soviet-sounding "Full Employment Caucus" at a recent press conference, promised to "give President Obama a number of executive orders that he can sign with pride and strength."

This is the formula for one-party rule. As such, it is outrageous, but it is just more static.

To be sure, some conservative Republicans -- Sen. Mike Lee, as well as Sen. Ted Cruz of Texas and Sen. Rand Paul of Kentucky, for example -- are speaking out against what Cruz calls the "imperial presidency." But will their impassioned voices become static, too?

What to do with a president who rewrites his own laws, enacts legislation that has failed (repeatedly) to pass into law, and creates legislation through executive agency regulation? Obama has done all of the above, and more -- for example, rewriting parts of Obamacare, implementing much of the repeatedly rejected DREAM Act, and creating cap-and-trade carbon restrictions, also rejected by Congress, through a web of EPA regulations. He promises to raise the minimum wage for federal workers, and is reported to be exploring how to unilaterally lift sanctions on Iran. Just this week, head-spinningly, Obama lifted a ban on aliens who supported terrorists, thereby permitting them to enter the country. As for his promise that if you like your doctor, you can keep you doctor, that, we know, was pure fraud.

The boldest proposition on the table so far -- not moving, I will add -- is for Congress to stop funding executive orders that upset the Constitution's "balance of powers." This is an obvious "check" to restore "balance." Fine. Yes. Go for it.

But Obama's systematic assaults on constitutional governance require more than defunding, and more than static. They require, first and most urgently, a full airing. Impeachment, which may begin with an impeachment inquiry, is the means the Constitution provided us. It offers the way "forward," as the president might say, to re-establish that America is a nation of laws, not men.