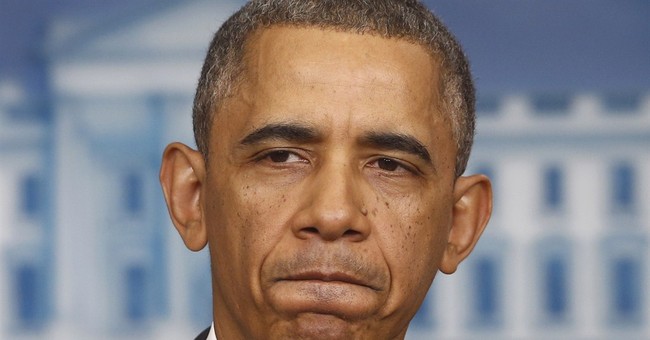 Now that U.S. and Afghan negotiators have agreed on terms of a seemingly open-ended -- if reduced -- U.S. military presence in Afghanistan, Afghan president Hamid Karzai and the Obama administration alike breathlessly await the verdict of the world's greatest deliberative body.

It is alarming to realize that this treaty renewing America's military commitment to Afghanistan under wholly disastrous terms for the United States seems to hinge on the say-so of some 3,000 "village elders" now gathered in Kabul -- and not, apparently, that of our own elected representatives. News reports consistently underscore the official focus on the coming decision from the "loya jirga" (that world-renowned embodiment of sharia justice and tribal enlightenment) without mentioning deliberations to come in the U.S. Congress.

"We have agreed on the language that would be submitted to a loya jirga, but they have to pass it," Secretary of State John Kerry said.

They have to pass it? The Associated Press puts it this way: "The U.S. declined to release specific details about the negotiations and stressed nothing was final until the gathering known as the loya jirga makes its decision."

What does our Constitution say? Yes, the president "shall have Power ... to make Treaties," but "by and with the Advice and Consent of the Senate ... provided two-thirds of the Senators present concur." To date, however, just five senators -- Democrats Jeff Merkley and Ron Wyden of Oregon and Joe Manchin of West Virginia, and Republicans Mike Lee of Utah and Rand Paul of Kentucky -- have heard this constitutional call of duty. They support an amendment to require the president to win approval from Congress on this new defense pact with Afghanistan.

This amendment should pass unanimously, unless, that is, the Senate wants to relinquish all powers to an increasingly dictatorial executive branch, and, more urgently, wants to see all powers of the U.S. military subordinated to the Islamic Republic of Afghanistan.

This, according to the agreement posted online this week by the Afghan foreign ministry, is the essence of the pact. (That's why I'm betting the loya jirga votes aye.) The U.S. State Department calls this online document a "draft," but given that deliberations are underway in Kabul, it seems logical to presume that this same "draft" is now under loya jirga consideration.

It comes down to who is in command, and, according to the draft agreement, it's not the U.S. For one thing, U.S. forces can't conduct combat operations in Afghanistan without Afghan approval. For another, U.S. forces can't conduct counterterrorism operations, even against al-Qaida-brand terrorists, without Afghan approval. There is simply no long-term American interest that can be served if command is not in American hands.

So what is this agreement all about? "Advising, training, equipping, supporting, sustaining" Afghanistan's hopelessly untutorable armies and police in every conceivable area -- in other words, propping up a hostile, corrupt sharia state where see-no-Islam policies and counterinsurgency strategy long ago failed to achieve utopian goals of "nation-building." The Obama strategy, if one can call it that, seems more calculated to cover up that colossal Bush-Obama policy failure than to advance American interests.

For years, I have believed that there are no American interests in Afghanistan, certainly not any that are advanced by a standing military presence. The situation is even worse under an agreement that subordinates American actions to Afghan approval. Under this draft agreement, even when Afghans deem joint action "appropriate," it must include "full respect for Afghan sovereignty and full regard for the safety and security of the Afghan people, including in their homes."

In other words, the draft agreement is a blueprint for making an Afghan's home the Taliban's castle -- the guaranteed safe haven against U.S. counterterrorist actions, a place where the rules of engagement will continue to incur undue risk for U.S. servicemen, and serve enemy ends.

And that's what the U.S. "gets" for the privilege of serving as Hamid Karzai's rent-a-cop.

In exchange, Afghanistan continues to receive all manner of goodies, only now as an "obligation": "The United States shall have an obligation to seek funds on a yearly basis to support" the defense and security of the Afghan state, the draft agreement states. Sounds to me as if the Obama administration has just negotiated a new and massive entitlement program. Call it Afghan-O-care. Instead of community organizers serving as "navigators," the new entitlement provides "relevant Afghan institutions" to administer the moolah. "Taking into account Afghanistan's annual priorities, the United States shall direct appropriate funds through Afghan Government budgetary mechanisms, to be managed by relevant Afghan institutions ..."

The graft goes on.

But the Obama administration is claiming victory if only for having preserved U.S. jurisdiction over military and civilian personnel in Afghanistan. (American contractors and their American employees, however, are on their own under Afghan law.) What seems troubling, however, is a provision that allows the U.S. to give consent to surrender or transfer military personnel to the custody of an international tribunal or other state.

Why is that even in there? Would a government so blind to American interests be able to resist bilateral or multilateral or transnational or sharia calls for "justice"?

It's yet another point of concern for the U.S. Senate, which must start advising and, I trust, not consenting -- and soon.