An Unthinkable 9/11: War in Support of al Qaeda 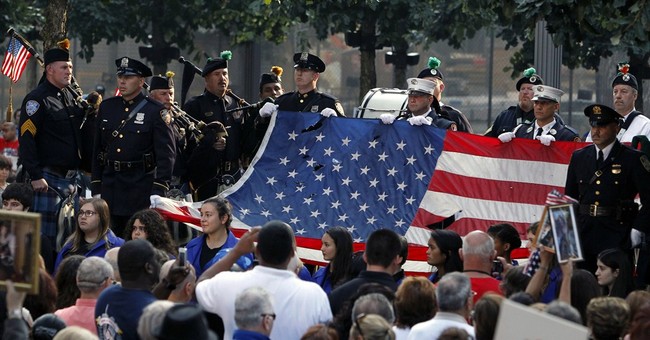 Back in 2004, when a NYFD chief reminded the 9/11 Commission that it was never in "anyone's consciousness" that the Twin Towers would fall, he underscored a terrible truth. After 9/11, we entered the Age of the Unthinkable. Seared into our collective consciousness is that the Twin Towers could and did fall. So could the U.S. Capitol, the Golden Gate Bridge and the Superdome. Our children know that which we as children never before imagined -- passenger planes may become guided missiles, and skyscrapers may turn into smoking, twisted rubble. This age of Islamic jihad against the West has indeed expanded our consciousness.

Or has it? Did these previously unthinkable acts of violence and mass murder sharpen our thinking, make us vigilant and more protective of our constitutional liberties under attack?

There was a time when I actually thought this was so. Re-reading my first column written after 9/11 today, one dozen 9/11s later, I find that it forecasts a new era of black and white, good and evil -- a new relationship with countries that were "with us or against us." I guess I have always been a lousy prognosticator. Still, that was the message coming out of the Bush White House early on.

My old column continues: "When an honest-to-goodness battle is joined, there can be no more middle ground. We simply have to know where our friends are -- as well as our enemies. Not that their whereabouts are secret. Long before the smoke had thinned to reveal the scope of the carnage in the United States, there was revelry in the Middle East, from Beirut to East Jerusalem, from Cairo to Baghdad."

I was, of course, talking about the Islamic world - the font of jihad to spread sharia to create a global caliphate. That simple catechism I would learn in the months ahead. Two weeks later, however, while I was still working my way through a copy of the Koran and, luckily found, a copy of Ibn Warraq's "Why I Am Not a Muslim," both of which I bought on 9/12/01, it was clear the mood in Washington was already different. The American flags that had instantly spread, flew and bristled in those early days were still everywhere, but "with us or against us" was gone. What was taking shape was something more like: "Who is 'us'?" Whatever that means.

In another column, one written on 9/28/01, I still pondered the need to impose mental order on the recent, unthinkable events, and the need to brace for another.

"As weeks pass, we may yet have to steel ourselves against another kind of blow to the collective brain: this one, only theoretical to date, but no less surreal for being self-inflicted. What Americans may have to come to grips with is the logic-defying notion of fighting terrorism with -- not against -- what might well be called terrorist-friendly nations."

It was happening already -- the blurring of lines that meant the blurring of identity. Our own leaders didn't prize the liberty-based civilization of the West as different from -- and better for liberty lovers than -- the world based in and dictated by Islam. On such denial an "international coalition" would arise. To our leaders, this coalition was always more important than our liberty.

This coalition, I wrote, "identifies the enemy as generic 'terrorists' who commit generic 'terrorism.' By opening the doors of alliance to an array of Arab nations whose embrace of such 'terrorists' ranges from tight, to secret, to (at best) arm's-length, the United States could very well create a broad-based coalition -- but one marked by a grievous moral vacuum that would surely undermine any American-led war effort to save the civilized world from the forces of violence, fear and instability."

A dozen years later, with the Middle East in near-chaos and Europe increasingly under sharia, it seems fair to say it has. Just as FDR pretended 80 years ago that Communism posed no ideological threat to our liberties, so, too, did George W. Bush pretend the same thing about Islam. Similarly, "Islam has nothing to do with Islamic jihad" -- a point of ideological purity enforced inside both the Bush and the Obama administrations.

Which leaves us where? With another grim anniversary behind us, the second president of the post-9/11 era, Barack Obama, has the nation supporting al-Qaida in Syria and contemplating military action on al-Qaida's behalf.

The unthinkable enters our consciousness again. But this time, few seem to notice.

(Diana West's new book is "American Betrayal: The Secret Assault on Our Nation's Character" from St. Martin's Press. She blogs at dianawest.net, and she can be contacted via dianawest@verizon.net. Follow her on Twitter @diana_west_.)