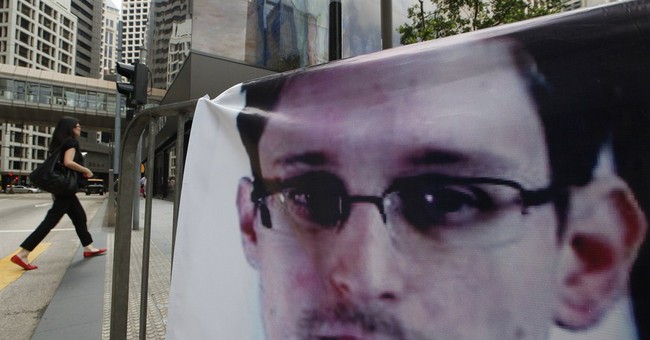 The narrow boxes through which we find ourselves entering public debate over the rise of a totalitarian government surveillance infrastructure are driving me a little crazy.

Pick one, now, the question demands, before we learn anything else, think anything more. In this way, our attention is focused onto Snowden, the man, not Uncle Sam, the secret megastate. We wade into a vortex of emotions whirling around loyalty to the republic: a republic with sovereign borders, or so we hope; that runs by rule of law, or so we think; where citizenship is precious, or so we imagine.

What Snowden's revelations confirm, however, is that such a republic no longer exists -- except as a mirage that powerful Surveillance State officials spin as reality.

"Traitor!" some cry, never noticing that Snowden's leak makes him a "traitor" to the Surveillance State, not the republic of memory. But such a gaffe is fine with our Big Brothers, from President Obama and FBI Director Robert Mueller to former Vice President Dick Cheney.

Listen the next time they insist that it is only the current state of mass surveillance that can preserve our folkloric republic, its residual form currently being liquidated by "immigration-reforming" U.S. senators, whose "hero" or "traitor" status we might also weigh. Listen the next time they argue that only PRISM, only stockpiling hundreds of millions of cellphone conversations, emails, texts and other personal records, can prevent a fiery cloud of new 9/11s.

Now they are even telling us that the first 9/11 could have been prevented altogether had the mass surveillance infrastructure been in place at the time.

This is a whopper too far, and with the gravest implications. Big Brother is rewriting our history again, after having withheld too many facts from We, the People, about 9/11 all along.

This new Big Lie about 9/11 is that the Snowden-leaked programs of data mining and cellphone collection might well have led authorities to identify two key Saudi hijackers in San Diego and roll up the whole al-Qaida plot. As former Florida Sen. Bob Graham, who served as co-chairman of the Congressional Joint 9/11 Inquiry, has made abundantly clear, this particular pair, Nawaf al-Hazmi and Khalid al-Mihdhar, was already well known to U.S. intelligence authorities for ties to the embassy bombings in Kenya and Tanzania and other hostile activities. Indeed, the CIA had even listened in on conversations at an al-Qaida safe house in Yemen that referenced the pair as far back as December 1999 -- no PRISM necessary.

For reasons unknown, the CIA did not nominate them to any U.S. terror watch lists, and they were able to live and take flying lessons and consort with other Saudi nationals in the U.S. in plain sight up until the 9/11 attacks.

Why? Are we looking at government incompetence as usual? Or how about more special U.S. treatment for Saudis? In Graham's excellent book "Intelligence Matters," he recounts the instructive experience of U.S. immigration official Jose Melendez-Perez, who, following an alarming entry interview at Orlando airport with a Saudi man named Mohammed al-Qahtani, barred al-Qahtani's entry into the country.

"Many of the other agents thought Melendez-Perez was risking his career because ... it is made clear to customs officials in their training that Saudis are different," Graham writes. "He told me he was taught that a Saudi ... is to be treated with deference and special respect." Graham continues: "Melendez-Perez's instincts proved correct. Waiting outside the airport for al-Qahtani's arrival was Mohamed Atta."

Not a byte of data mining necessary.

Meanwhile, the information linking 9/11 hijackers to other Saudis in California is information that congressional investigators developed themselves. The FBI, as Graham has long attested, withheld evidence from Congress' Joint Inquiry -- and, later, the 9/11 Commission. Why? More Saudi cover-up, it seems. It doesn't stop. For example, the 28-page section of the 9/11 Commission's final report on "sources of foreign support for some of the Sept. 11 hijackers," remains classified, another bone of Graham's contention.

In 2011, reporters Anthony Summers and Dan Christiansen broke the news in the Broward Bulldog that the FBI withheld more information from the Congress' inquiry: its investigation into another Saudi 9/11 support network, this one in Sarasota, Fla. The FBI rejected the claim, insisting the agency had informed the 9/11 Commission about its investigation at the time, which it also claimed had gone nowhere.

"This assertion by the FBI was not credible," Graham wrote in a sworn declaration dated May 31, 2013 attached to a new Freedom of Information Act request by the reporters. Graham contacted 9/11 Commission co-chairmen Thomas Kean and Lee Hamilton and reported that neither of them had ever heard of an FBI investigation in Sarasota, either.

More important, as Graham states, the FBI's failure to call attention to "documents finding 'many connections' between Saudis living in the United States and individuals associated with the terrorist (attacks) ... interfered with the Inquiry's ability to complete its mission."

This stonewalling continues under the Obama administration. In his sworn declaration, Graham names names. These include CIA Director John Brennan, who fobbed him off, and deputy FBI Deputy Director Sean Joyce, who has blocked Graham's efforts to pursue the Sarasota story at every turn. Graham states that Joyce advised him that he, Joyce, had instructed the FBI agent in charge of the Sarasota investigation (since transferred to Honolulu!) not to speak to Graham.

"I am troubled by what appears to me to be a persistent effort by the FBI to conceal from the American people information concerning possible Saudi support of the Sept. 11 attacks," Graham writes.

Also troubling is watching the U.S. government hide and twist history -- the shocking subject of my new book, "American Betrayal" -- in real time. We can't let them do this to us again.