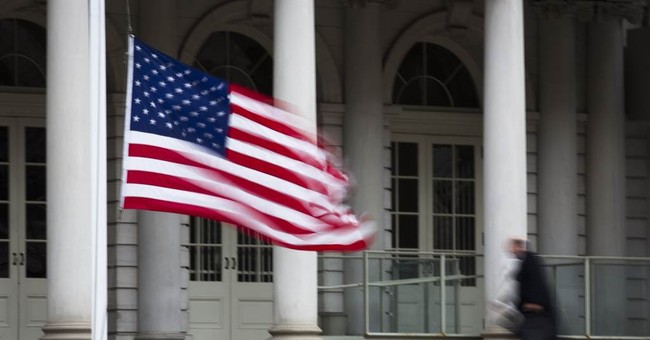 A book called "American Betrayal: The Secret Assault on Our Nation's Character" (St. Martin's Press) shouldn't promise uplift and spiritual renewal. I know. I wrote it.

That said, the story of "betrayal" that my new book lays out -- betrayal enabled by a de facto Communist occupation of Washington by American traitors loyal to Stalin, which would solidify in the 1930s under FDR and be covered up by successive U.S. administrations and elites -- is not without inspiration. I am talking about the inspiration of the truth-tellers.

"American Betrayal" presents a rewrite of most of World War II and Cold War history, something I never imagined doing when I first began writing the book. This is simply the story that took shape from my research. And it takes shape in the book in a first-person narrative exactly as I stumbled across the revelations and put them together according to two basic mechanisms.

One relates to revelations from secret archives in Moscow and Washington that opened, briefly and partially, after the USSR dissolved in 1991. I discovered that the treason documented in these archives, treason committed by Americans in government, some in the very highest positions of power, had not been incorporated into our general historical understanding of such defining events as World War II and the Cold War. So I did my best to incorporate them. What emerges makes our history look completely different -- even our near-sacred history of World War II.

The other stream of new information that I was able to reweave into the American story came from those I think of as the truth-tellers. These are the forgotten and/or maligned witnesses and investigators who told and sought the truth about the massive penetration and infiltration by Americans serving a hostile foreign power. (Yes, among them is Sen. Joe McCarthy.)

Their truth-seeking example is inspiring, particularly in an age of routine, serial lying and obfuscation in Washington. If there is one thing I hope my book does, it is to reintroduce us to these great Americans. Because they contradicted the official narrative -- the "court histories" as author and historian M. Stanton Evans calls it -- these Americans were smeared, marginalized and lost to us, their rudderless descendants.

We need them back in our historical and moral consciousness. To that end, I am embarking on an occasional series devoted to truth-tellers highlighted in "American Betrayal."

I will begin with Maj. George Racey Jordan, who in 1949 and 1950 came forward to testify under oath before Congress that one big reason the Soviet Union had recently surprised the world by exploding an atomic bomb was that he, Jordan, the top "expediter" shipping thousands of tons of U.S. war supplies and aircraft through an airfield in Great Falls, Mont., to the Soviet Union under Lend-Lease during World War II, had personally overseen the shipment of uranium to Moscow.

Really? Sure enough, as a congressional investigator would testify, two specific shipments of uranium oxide and nitrate were "completely documented to include even the number of the plane that the flew the uranium ... out of Great Falls." This postwar revelation before Congress would shock and anger Gen. Leslie Groves, head of the Manhattan Project, because he had slapped an embargo on the wartime export of uranium from the U.S. Of course, the shipments in question came from Canadian stocks. How did that happen? Therein lies a tale -- a tale of betrayal.

Meanwhile, it wasn't just uranium that Jordan expedited, as he testified. Heavy water, too.

The congressional committee was able to document the shipment of heavy water, too.

In all, Jordan "expedited" 23 atomic materials through the big airbase in Montana to Moscow during the war, along with nearly 14 million pounds of aluminum tubes, also essential to atomic experimentation.

Findings in Soviet archives would later confirm that possession of the atomic bomb was what emboldened Stalin to trigger the Korean War in 1950. The implications of the theft of U.S. atomic secrets, then, becomes staggering.

After Jordan went public, all manner of witnesses stepped forward to corroborate different aspects of his story. There was the pilot who flew the uranium shipment (and said he handled brown grains of uranium that spilled from a box). There was the GI who recognized in Moscow-bound blueprints the chemical structure of uranium. Soviet defector Victor Kravchenko, celebrated author of "I Chose Freedom," would himself testify before Congress and corroborate specific allegations by Jordan attesting to Lend-Lease as a giant conduit of Soviet espionage.

What even this skeletal synopsis of a tale that unfolds in detail in "American Betrayal" should make clear is that it wasn't just the Rosenberg atomic spy ring that enabled the Soviet theft of U.S. atomic secrets. There was a massive looting effort underway inside the U.S. government overseen by senior Washington officials. Chief among these powers was Harry Hopkins, FDR's very top, very enigmatic, very sinister (I have concluded) adviser. Hopkins was the power behind Lend-Lease -- often the power behind Roosevelt, too -- and a central figure in my book.

I knew none of this "lost" history going into my research more than four years ago. Precious few Americans, I've since learned, do. Hopkins, once famously known as Roosevelt's "co-president," is as absent from our national history lessons as Jordan, a credible eyewitness to what might well have been treason. Why do we have such blanks? Why isn't Jordan's earth-shaking testimony, most of it corroborated by documentation and supporting eyewitness accounts, ever taught? How did Hopkins, once the most powerful man in Washington next to FDR (and maybe more so) slip out of our collective memory? Who stole our history -- and why?

These are the questions I set out to unravel in "American Betrayal." On this quest, I learned there was nothing like seeking out, dusting off and listening to history's truth-tellers.

(Diana West's new book is "American Betrayal: The Secret Assault on Our Nation's Character" from St. Martin's Press. She blogs at dianawest.net, and she can be contacted via dianawest@verizon.net. Follow her on Twitter @diana_west_.)