Tell Me Again Why the U.S. Used Jihadists to Guard Benghazi 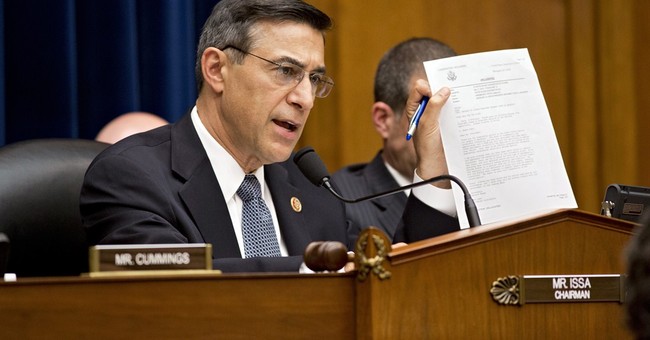 "I want to ask a couple of questions about the February 17 Martyrs Brigade," said Rep. Blake Farenthold.

The Texas Republican was addressing the three State Department "whistleblowers" who testified before the House Oversight and Government Reform Committee about the attack in Benghazi that killed four Americans, including Ambassador Christopher Stevens. The three witnesses were Mark Thompson, acting deputy assistant Secretary of State for counterterrorism; Greg Hicks, former deputy chief of mission in Libya; and Eric Nordstrom, former regional security officer in Libya.

When Farenthold introduced this crucial subject into the hearings, he also opened a window into Benghazi that shone light not only on disastrous Western support for "Arab Spring," but also on the core crisis in U.S. foreign policy.

Farenthold: "Mr. Nordstrom, can you tell me the role of February 17 Martyrs Brigade in protecting the consulate in Benghazi?"

Nordstrom: "Certainly. That was the unit, for lack of a better term, that was provided to us by the Libyan government."

This already was news to me: The Libyan government provided known jihadists to guard U.S. interests?

On second thought, there is nothing fantastic about this when -- or, rather, if -- we consider that the U.S. government supported an army of known jihadists in its revolution against Libya's anti-jihadist former leader Moammar Gadhafi. I say "if" because I don't expect even the members of the committee to see "Arab Spring" this way. Uncle Sam's open support for jihad is an epic scandal that is never even acknowledged.

Farenthold: "Were you aware of any ties by that militia to Islamic extremists?"

Nordstrom: "Absolutely. Yeah, we had that discussion on a number of occasions, the last of which was when there was a Facebook posting of a threat that named Ambassador Stevens and Sen. (John) McCain, who was coming out for the elections. That was in the July (2012) time frame. I met with some of my agents and also some (CIA) annex personnel and we discussed that."

More news: Nordstrom seems to be saying that the February 17 Martyrs Brigade actually threatened both the U.S. ambassador and a U.S. senator -- and still served as U.S. security guards. This is shocking to read in black and white, although, again, when it becomes clear that Uncle Sam supported the same, exact jihad in Libya that al-Qaida supported, it makes -- if not sense exactly, then certainly a pattern.

Farenthold: "Mr. Hicks, you were in Libya on the night of the attack. Do you believe the February 17 militia played a role in those attacks, was complacent in those attacks?"

Hicks: "Certainly, elements of that militia were complicit in the attacks. The attackers had to make a long approach march through multiple checkpoints that were manned by February 17 militia."

More news: Most media accounts identified al-Qaida-linked Ansar al-Sharia ("Supporters of Sharia") as the militia manning the checkpoints around the compound that horrible night. Of course, Libya militias seem to be loose organizations with overlapping membership. More important, though, as John Rosenthal, author of "The Jihadist Plot: The Untold Story of Al-Qaeda and the Libyan Rebellion," puts it, virtually all of them "sympathize" with Ansar al-Sharia. "In fact," Rosenthal said in a recent interview with me, "in the literal sense of the term, virtually all of the Eastern Libyan militias are 'Ansar al-Sharia' -- that is to say 'supporters of the sharia.'"

February 17 Martyrs Brigade is no different. Its Facebook page has displayed a photo featuring the black flag of al-Qaida, and more important, the brigade demonstrated for sharia in Benghazi last summer.

"In defiance of the U.S. designation," Rosenthal wrote, "the Arabic on the graphic declares, 'We are all Jabhat al-Nusra.'"

"We" were also U.S. security guards.

Farenthold: "I'm stunned that the State Department was relying on a militia with extremist ties to protect American diplomats. That doesn't make any sense. How does that happen?"

For me, Nordstrom's reply was the most candid moment in the hearings. Out came the man's evident frustration at serving a country gone mad in crippling alliances with jihadist enemies everywhere.

Nordstrom: "You mean like in Afghanistan, where Afghanis that are working with our military ... turn on them and shoot them? Or in Yemen, where our embassy was attacked in 2008 by attackers wearing police uniforms? Or in Saudi Arabia, in Jeddah, we had an attack in 2004. The Saudi National Guard that was protecting our facility reportedly ran from the scene and then it took 90 minutes before we could get help."

It felt as if Nordstrom could have continued, but the congressman, perhaps mindful of the clock, jumped back in.

Farenthold: "There's pretty high unemployment in the United States. I would imagine there's some Americans that'd be willing to take jobs overseas."

Nordstrom: "We couldn't agree with you more. But unfortunately, as I said earlier ... that was the 'best' bad plan. That was the unit that the Libyan government had initially designated for VIP protection. It was very difficult to extract ourselves from that."

If Americans ever learn how and why this is so, why our government is making common cause with jihadist groups everywhere, they will realize that Uncle Sam has himself joined the jihad. Let's hope we learn before it's too late.