Few Pulitzers On the Right Side 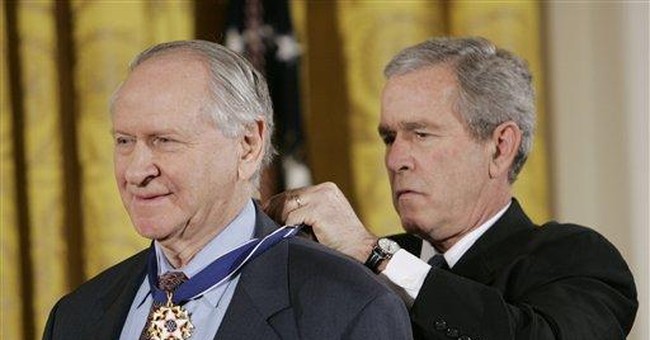 Just as the Pulitzer Prizes come around every year, a conservative columnist comes around after them, dusting off the hard fact, as measured in an ever-expanding set of tally marks, that conservatives rarely get to pop a champagne cork over one of their own.

Take the Pulitzer Prize for commentary. Since George F. Will won in 1977, William Safire (1978), Vermont Royster (1984), Charles Krauthammer (1987), Paul Gigot (2000), and Dorothy Rabinowitz (2001) have won as well, and good for them. But that's six conservative columnists in 33 years. This year's winner, Kathleen Parker, is sometimes seen as Rightish, but, with a penchant for smacking down social conservatives, she is perhaps too enlightened, Pulitzer-ainly speaking, to count. As Parker herself put it: "It's only because I'm a conservative-basher that I'm now recognized after 23 years of toiling in the fields, right?"

Hard to say. But it fits the Pulitzer pattern. The best to way to win a Pulitzer still seems to be by "pleasing liberals with stories that advance their agenda," as L. Brent Bozell III wrote in 2007. The chosen winners "demonstrate again the stranglehold that liberals and leftists enjoy when it comes to garnering recognition," as George Shadroui put it in Frontpagemag.com in 2004. It is "the main business of the Pulitzer committees to hand out the Prizes to other liberals, both in the press and in the arts," noted the New Criterion in 1992. And the conservative grumbling goes back farther than that.

With good reason. According to the conditions set by press baron Joseph Pulitzer himself when he created his eponymous awards a century ago, it turns out that we -- meaning we conservatives -- was (stet) robbed. That is, according to Pulitzer's intentions, these prizes should really be going to conservatives.

I stumbled onto this scoop quite by chance after first leafing through an old essay by the great American writer Kenneth Roberts, author of a remarkable series of historical novels including "Northwest Passage" and "Oliver Wiswell." Roberts was discussing what was already in the early 1930s an enduring mystery to him: why the Pulitzer Prize for novels (later fiction) was consistently awarded to books "that would have seriously affected Mr. Pulitzer's blood pressure if he were still alive."

Intrigued, I continued reading. According to the World Almanac Roberts consulted (a Pulitzer property, he notes), Pulitzer wanted to honor "the American novel published during the year which shall best present the wholesome atmosphere of American life, and the highest standard of American manners and manhood." Wholesome? High American standards? Writing at a time of proletarian chic, Roberts went on to list a series of prize-winning books that had little wholesome or even American about them.

I found that the original playwriting criteria were similar. According to a 1918 New York Times report on early Pulitzer winners, the drama prize was meant for the New York-produced play that "shall best represent the educational value and power of the stage in raising the standard of good morals, good taste and good manners."

The current Pulitzer Web site makes some note of its board "growing less conservative over the years in matters of taste," adding: "In 1963 the drama jury nominated Edward Albee's 'Who's Afraid of Virginia Woolf?,' but the board found the script insufficiently `uplifting,' a complaint that related to arguments over sexual permissiveness and rough dialogue. In 1993 the prize went to Tony Kushner's 'Angels in America: Millennium Approaches,' a play that dealt with problems of homosexuality and AIDS and whose script was replete with obscenities."

Well, as long as it was "replete."

Regarding editorial writing (the commentary prize didn't kick in until later), the original criteria were more nebulous -- "the test of excellence being clearness of style, moral purpose, sound reasoning, and power to influence public opinion in what the writer conceives to be the right direction."

Maybe some of the first Prize winners, a pair of 1917 editorials from the Louisville Courier-Journal, can clue us in to what that "right direction" was. Written in support of U.S. involvement in World War I, one is called "Vae Victis" -- Woe to the Vanquished -- and the other, "War Has Its Compensations."

I think it's safe to say the Pulitzer Prize wasn't dreamed up for Lefties.

Well, That Graph Certainly Torched the Liberal Narrative on Hate Crimes in America
Townhall
'How DARE you say my OWN is decided by the color of my skin': Calvin Robinson takes on activist Ken Hinds in EPIC debate (watch)
Twitchy
Greg Gutfeld Muscles in on the Ratings of Late Night Talk Shows
Redstate
Trump Vindicated as Judge Rules Michigan Secretary of State Violated Election Laws
PJ Media