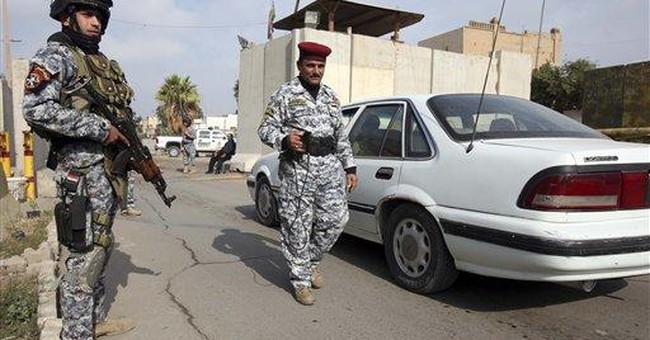 There's at least one more aspect to consider when appraising the past six years in Iraq climaxed by the "surge." This would be the indirect effect of "reflected glory," if such a quaint term applies, and has to do with the sort of state the U.S. helped create in Iraq.

I don't know how to candy-coat reality: Post-surge Iraq is a state of increasing repression, endemic corruption, religious and ethnic persecution and encroaching Sharia. Recent media reports flag just some of these glaring truths that American elites, civilian and military, seem to shy away from.

In October, from AsiaNews, came the latest news of, to quote the headline, "Sharia Slowly Advancing in Najaf and Basra, for Non-Muslims Too." Here, the Sharia (Islamic law) is invoked to ban alcohol sales and consumption by non-Muslims -- namely, Christians, given the eradication and dispersal of Iraq's ancient Jewish population -- "on the grounds that Iraq's constitution," as Ahmad al Sulaiti, deputy governor of Najaf, notes, "'bans everything that violates the principles of Islam.''" More on that below.

In November, Reuters highlighted the government crackdown on the media via lawsuits against criticism, and laws enabling the government to close media outlets that "encourage terrorism, violence," and -- here's a handy catch-all -- "tensions." There are new rules to license satellite trucks, censor books and control Internet cafes. "The measures evoke memories of ... the laws used to muzzle (journalism) under Saddam Hussein," Reuters writes.

In December, the British paper The Observer reported that hundreds of Iraqi police and soldiers descended on Baghdad's 300 nightclubs where they "slapped owners' faces, scattered their patrons and dancing girls, ripped down posters advertising upcoming acts and ordered alcohol removed from the shelves." The official reason? No licenses. But, the paper reports, "the reality is that a year-long renaissance in Baghdad's nightlife may be over as this increasingly conservative city takes on a hard-line religious identity." As one club owner said: "This is a political decision with a religious agenda. (Prime Minister Nouri al-) Maliki needs the votes of religious parties ... They (the government) supported us and gave us incentives to reopen the clubs, then when it suited them, they sold us and themselves out to the fundamentalists."

There's a lot of that "selling out to the fundamentalists" going around post-surge Iraq, where, it must be faced, one particularly shocking, unintended consequence of U.S. involvement has been the religious "cleansing" of Iraq's ancient Christian populations. In 2003, 1 million Christians lived in Iraq. Six years later, after successive waves of violence and intimidation largely unchecked by either Iraqi government action or U.S. intercession, more than 500,000 Christians have fled the country. It is a crisis that inspired Christian leaders to assemble in Baghdad in December for a conference piteously titled: "Do Christians Have a Future in Iraq?"

This anti-Christian persecution is a large part of why the U.S. Commission on International Religious Freedom recommended in December 2008 that the State Department name Iraq a Country of Particular Concern (CPC) -- its dread Saddam-era designation. (Recommendation denied.) In May, to strengthen human rights in Iraq, the commission's Iraq report included suggested amendments to Iraq's constitution, which, not incidentally, boil down to abolishing the constitutional supremacy of Islamic law. (And yes, U.S. legal advisers helped write this same Sharia-supreme governing document.)

For example, the commission suggested deleting the line in Article 2 that says no law may contradict "the established provisions of Islam." It suggested revising the "guarantee of `the Islamic identity of the majority' to make certain that this identity is not used to justify violations" of human rights. It also suggested that "the free and informed consent of both parties (be) required to move a personal status case to the religious law system," and "that religious court rulings (be) subject to final review under Iraq's civil law." Another suggestion was to remove "the ability of making appointments to the Federal Supreme Court based on training in Islamic jurisprudence alone."

Good ideas -- if religious freedom is the objective. But it is not the objective in Iraq, or in other Islamic countries. Which should make the United States, founded and defined by such freedom, look before nation-building, and ask: Do we really want Americans to "surge" and risk death to build nations such as this to stand as monuments to "victory"?

A Group Of Parents Sent Their Kids' Face Masks to A Lab for Analysis. Here's What They Found
Townhall
Florida man faces felony charges after doing a burnout with his pickup on a Pride-painted intersection
Twitchy
Lauren Boebert Had the Perfect Message for Antifa Harassing Conservatives in Denver
Redstate
Portland Mayor Scrambles as Fallout From Mass Resignations of Portland Riot Squad Begins
PJ Media