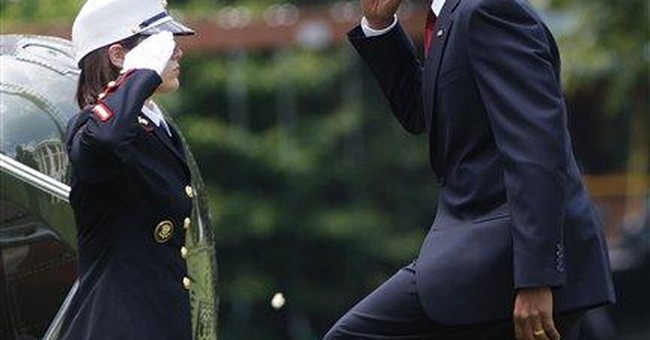 At some point of embittering clarity, Americans will open their eyes to the glaring significance of the Obama era and see the Power Grab Years for what they are. Whether this realization comes in time to stave off the eradication of the United States as we thought we knew it, or whether it comes too late, I predict it will surely come.

If it comes in time, the realization that the nation dodged history's bullet will produce massive waves of relief. If it comes too late, the understanding of our fallen state will live on as the lost lore, not of a subject people exactly, but of a self-subjected people. That's because in this strange historical instance, the American people, beginning with but not limited to those of us who voted Barack Obama into the White House, seem to have agreed to shoulder the heavy, costly yoke of exponentially increasing government control of our lives.

Make that exponentially increasing executive branch control of our lives -- even more alarming given the cult of President Obama's personality already evident. With a rubberstamp Democratic Congress, it is the Obama White House that calls the shots, and it doesn't let dissenters forget it. As much as anything else this week, what cast me into this particular abyss of speculation was the stunning news that after Sen. Jon Kyl, R-Ariz., declared the Obama administration's stimulus spending plan ineffective and urged a halt to further stimulus spending, the White House dispatched four Cabinet secretaries -- Transportation's Ray LaHood, Agriculture's Tom Vilsack, Housing and Urban Development's Shaun Donovan, Interior's Ken Salazar -- to write letters to Republican Arizona Gov. Jan Brewer enumerating every dime of federal monies that would no longer flow to her state if Sen. Kyl had his way.

As LaHood snarkily put it to Gov. Brewer, "If you prefer to forfeit the money we are making available to your state, as Senator Kyl suggests, please let me know."

What did the White House expect the governor to do next? Make Sen. Kyl an offer he couldn't refuse? Or, as Mark Steyn, detecting the whiff of extortion in the air, asked: "Why not just break his (Kyl's) legs in the Senate parking lot?"

Muscular politicking on steroids is the Obama way, whether the administration is bullying Chrysler bond-holders, wresting control of the Census from the Commerce Department, or empowering, at last count, as many as 31 "czars" to oversee various aspects of federal policy, from Gitmo closure "czar" Daniel Fried to executive pay "czar" Kenneth Feinberg, many without Senate confirmation. In explaining the full White House press on government-controlled health care, top Obama strategist David Axelrod could have been describing the Obama White House m.o. in general: "Ultimately, this is not about a process, it's about results." Which is just another way of saying the ends justify the means.

But what are those ends? My guess is that socializing the engines of wealth and creation in this county is itself a means to an end -- the consolidation of a new power structure derived from a government-dependent population and animated by the kind of identity politics exemplified by Sonya "wise Latina" Sotomayor, whose self-contradictory Senate testimony this week, by the way, perfectly tracks Axelrod's playbook. In the meantime, however, as the administration expands its control over the private sector, as it formulates foreign policy in harmony with that of Castro's Cuba, Chavez's Venezuela, and Ortega's Nicaragua, it's no stretch to say that Barack Obama is reshaping the USA in a distinctly socialist mold, something closer to a dictatorial workers' paradise than to cowboy-friendly Reagan Country.

But there exists a potent taboo against the S-word and other terminology essential for analysis. Jeb Bush's aversion to the term is typical. "Is Obama a socialist?" Tucker Carlson recently asked him in Esquire magazine.

Bush said he didn't know, and called the president a "collectivist." Same difference? Perish the thought. "Socialism is pejorative in America," Bush explained. "So people stop listening. People are tired of it. That word won't stick. It's a turnoff. It doesn't help."

"It's a turnoff"? It had better not be a turnoff. Because if we don't talk about it, we won't think about it -- until it's too late.