Pundits, Get Out of Iran's "Green" Zone 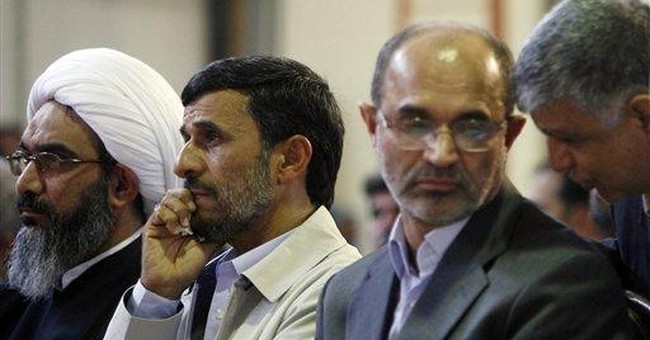 Aside from a mass deployment of force against unarmed protestors (which, unfortunately, is not unlikely) what is the worst possible outcome in Iran? Answer: That it becomes unavoidably clear the post-election conflict isn't a struggle between tyranny and freedom -- the epic narrative we've been hearing in absolute, non-contestable terms. The worst thing that could happen next, at least for the absolute, non-contestable pundit-ocracy, is that it becomes clear we're looking at an intra-Islamic power struggle that has nothing to do with liberty and justice for anybody.

If this happens, the next question becomes: At what point do said pundits change the color of their Twitter avatars (Joe Scarborough) and their blog backgrounds (Andrew Sullivan) back from Islam green? And will they ever apologize for the fuss?

Dream on. There's something about commenting on the Middle East -- really, commenting on Islam - that causes pundits never to say they're sorry. Even if Iran's protests reflect a theocratic power struggle between rival mullahs - namely, between Akbar Hashemi Rafsanjani, who backs Mir Hossein Mousavi, and Ali Khamenei, who backs Mahmoud Ahmadinejad, it will just be time to move on.

Such a revelation -- that this may be a battle between theocratic, anti-American, anti-Israel, pro-jihad, Khomeinist factions -- should be enough to chill the enthusiasm of any pro-democracy booster. But would the Wall Street Journal's Bret Stephens, for example, so far the swooniest of all commentators, (harkening to the "sweet" sound of "Allahu Akbar" as "the rallying cry of the protesters"), continue to push the opposition propaganda that "there are two interpretations of Islam: the aggressive Islam of Ahmadinejad, or the mercy Islam of Mousavi"? Probably.

And if a Stalinist-style power struggle by way of Mecca were unmasked, would Pulitzer Prize winner Charles Krauthammer withdraw his sweeping claims that on Tehran's streets "all hangs in the balance"? I doubt it. After all, he's still cooing over "Iraq establishing the institutions of a young democracy" even as Prime Minister Nouri al-Maliki is now declaring a "great victory" over the "foreign presence" now leaving Iraq -- meaning all U.S. troops who have fought and died for that lousy country.

And how about this: If the Iranian opposition movement turns out not to be expressing, as Krauthammer recently wrote, its "anti-regime fervor" but rather fervor for its own regime, will we even get the news? Unlikely. "Our fundamental values demand that America stand with demonstrators opposing a regime that is the antithesis of all we believe," Krauthammer wrote. If the demonstrators' regime is also "the antithesis of all we believe" -- no worries; it's all good.

Amazingly, the thought that there might not be a pro-West horse to ride here doesn't enter the collective media mind, from Left to Right. Such unbraked credulity reflects the media failure to deal competently with any non-Western aspect of Islamic society. They instantly project their Western selves onto everything every time.

It would seem advisable to feel one's way into this story, particularly after picking up on the mullah-versus-mullah action, along with a few choice highlights of "opposition" candidate Mousavi's resume. Mousavi (who defended the seizure of American hostages taken from the U.S. embassy there in 1979) served as the Ayatollah Khomeini's prime minister (and is believed to have had a connection to the 1983 attack on the Marine Corps barracks in Beirut), reportedly initiated contact with Pakistan's A.Q. Khan to launch Iran's nuclear program, and, as John Bolton recently pointed out, "is fully committed to Iranian terrorism." (So much for the Wall Street Journal's uncontested mention of Mousavi's "mercy Islam.") In a recent Al Jazeera interview, Mousavi revealed his opinion of Ahmadinejad's genocidal intention to "wipe Israel off the map." Mousavi said: "From the beginning, I objected to that phrase."

But there's more. In a seminal but barely reported speech on June 20, Mousavi explained his movement. It has nothing to do with freedom, with modernity or, as Iran-watcher Michael Ledeen has written, a call "in effect for the end of the Islamic Republic as we know it." Indeed, Mousavi's vision as laid out in this speech has everything to do with returning Iran to the past -- 1979, to be precise.

In a paean to the 1979 Islamic Revolution -- "an illumination, never experienced before" -- that empowered the noxious Ayatollah Khomeini, Mousavi explains his intent to revive "the Islamic revolution as it was" and "the Islamic Republic as it should be." Noting that this "noble message ... excited the younger generation, a generation that had not seen those times, and felt a distance between ... this great inheritance," he speaks of the "rights of the people" to fair election results, and pledges his loyalty to this cause. And finally this:

"We are not up against our sacred regime and its legal structures; this structure guards our Independence, Freedom and Islamic Republic. We are up against the deviations and deceptions and we want to reform them; a reformation that returns us to the pure principles of the Islamic Revolution."

Returning the "sacred regime" to the "pure principles of the Islamic Revolution" isn't the kind of "reform" most pundits have in mind. Which should be enough to turn their faces green -- jihad green -- but it won't.