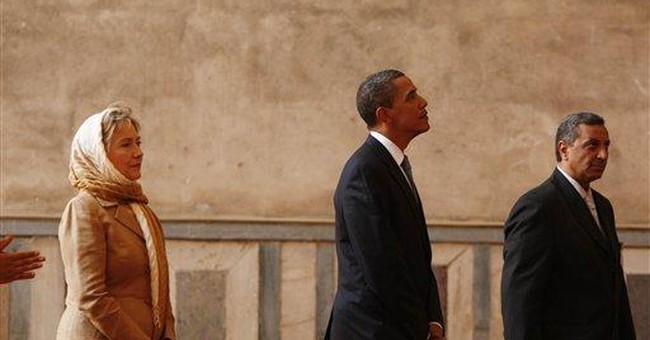 The last thing "President Hussein" did not do before flying Magic Carpet One to "the Kingdom" was .... OK. Hang on a sec. I'm just trying to get into the Islamo-spirit of being a citizen of what the 44th president called, and I quote: "one of the largest Muslim countries in the world." Yes, Barack Obama was talking about the United States, which, with somewhere between 2 million and 3 million Muslims tops (not all of whom are citizens) doesn't exactly sound like Mecca for Islam, literally or figuratively.

So why did the president say this bizarro thing? Was it just one more super-corny, proto-crypto-Islamic slip, a la his visits to, as Obama put it on the campaign trail, "all 57 states" (the Organization of the Islamic Conference has 57 member states)? Or the "five pillars" of his economic plan (Islam has "five pillars")? Or was it more prosaically the case that the teleprompter was taking the day off?

We just don't know. But don't expect the White House press corps to find out, particularly not after the State Department warned media traveling with al-POTUS (President of the United States) to Saudi-land not to stray from either pre-planned coverage or their hotels at the risk of "arrest and detention by Saudi authorities." Yes, these were the ground rules dictated by Saudi Arabia and agreed to by the U.S. government -- and, apparently, all major media. Are we dhimmi or are we dhimmi?

Taking it from the top: The last thing President Obama did not do before leaving for Saudi Arabia, "addressing" the Muslim world from Cairo, and commemorating D-Day in Europe (in that order) was condemn a bona-fide jihadist attack on a Little Rock, Ark., Army-Navy recruiting station that left U.S. Army Pvt. William Long, 23, dead, and U.S. Army Private Quinton Ezeagwula, 18, wounded. The killer was Abdulhakim Mujahid Muhammad, 23, an American convert to Islam originally named Carlos Bledsoe. Muhammad had recently returned from studying jihad in nearby Yemen -- nearby, that is, to Saudi Arabia, President Obama's first stop abroad.

The horrific shooting took place Monday morning when the soldiers, both of whom had just completed basic training, were taking a break outside the office. The hours passed, then the entire day, but no statement came from these soldiers' commander-in-chief (Obama). Never mind that just the week before, as Michelle Malkin has pointed out, President Obama personally condemned the murder of abortionist George Tiller within hours of the crime ("I am shocked and outraged by this heinous crime ..."). The Justice Department also issued a timely statement condemning Tiller's murder, additionally dispatching federal protection to abortion clinics. But there was nothing on Monday from Washington for these U.S. soldiers who had come under fire in a sleepy shopping mall on U.S. soil, and no federal assistance was put forward for the country's recruiting stations, long subjected to harassment, vandalism and now worse.

The silence was even more noticeable on Tuesday when President Obama held a press conference in Washington to announce his selection for secretary of the Army. While blah-blahing about preparing our soldiers "to meet the challenges of our time," the president failed to note the "challenge" of homegrown jihad that had tragically cost Pvt. Long his life and put his comrade in the hospital. And then Obama was off on his own jarringly personal mission of perpetual outreach to the Islamic world, this time setting out in Sharia-ruled, oil- and jihad-exporting Saudi Arabia. "I thought it was very important to come to the place where Islam began and to seek his majesty's counsel," Obama said on Wednesday.

Little Rock is where the president of the United States should have traveled this week to address the Muslim world. There, he should have declared that the 21st century era of Islamic jihad is over, that Pvt. Long had not died in vain, that his memory would be served by a new American resolve to join with its kindred allies in liberty to contain and ultimately reverse the militarily- and demographically pressed advance of Sharia (Islamic law) across the non-Muslim world.

But such a pilgrimage to the heart of America to denounce jihad obviously doesn't interest Barack Obama. Not when he could make a pilgrimage to the heart of Islam where jihad is a sacred institution. Finally, on Wednesday afternoon, as criticism of the president's silence began to achieve a critical Internet mass, a statement came from the White House: "I am deeply saddened by this senseless act of violence ..." it said.

"Saddened"? "Senseless"? What dishwater-weak words to use about what the shooter himself is said to have described as an Islamically motivated attack on U.S. troops. Of course, from the president's bully pulpit in Cairo, such talk is sure to go down smoothly with his newest, most sought-after constituency.