Pay Attention to the Somalis 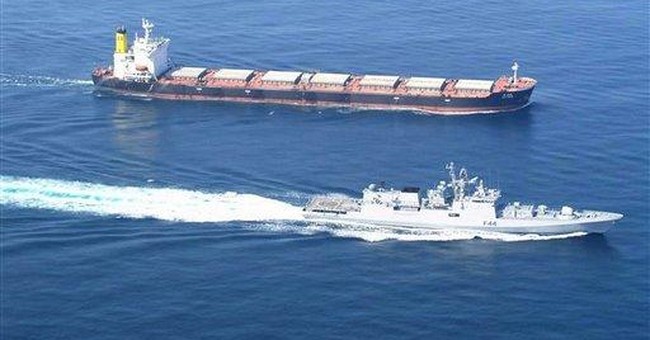 President Bush has been "briefed," as they say, about the extraordinary spate of Somali piracy that culminated this week in the seizure of the Sirius Star. Incredibly, this Saudi supertanker loaded with crude oil destined for the United States now joins a commandeered fleet of about a dozen ships and 200 crew being held by Somali pirates who, according to Jane's Terrorism and Security Monitor, may well have links to jihadists.

I'm wondering whether President Bush, at any point in his briefing, ever thought to ask his experts: "What is up with Somalia?"

I say this given the disjointed but unmistakable prominence of Somalis in recent news. Or, rather, in what would have been recent news, maybe, if the media weren't preoccupied with more weighty stories such as which Washington private school the Obama girls will attend next semester.

Within the last week, for example, the State Department confirmed that massive immigration fraud has been perpetrated overwhelmingly by Africans claimed as close kin (parent, spouse, minor child) by legal residents in the United States. (According to a report in the City Pages in Minneapolis, this scam has been netting some unknowns along the food chain up to $10,000 per head.) Given that Somalis form the largest bloc of African immigrants to the United States, this becomes another story with Somalis playing a starring role.

Evidence of "family" fakery came out in a very quietly released State Department fact sheet titled "Fraud in the Africa Priority Three (P-3) Program." This release surely would have dropped into the post-Election, pre-Inauguration void of bliss enveloping official Washington were it not for the invaluable blog Refugee Resettlement Watch, which broke the story online.

In the form of a Q&A, the State Department declared that, due to evidence of massive fraud, the government was suspending the family reunification program in Africa, a decision it has since, also very quietly and without explanation, expanded to include the whole world.

How massive was this fraud? After initiating a DNA testing program among "family" members claiming P-3 status in Africa -- where 95 percent of the P-3 applications originate primarily among Somalis, Ethiopians and Liberians -- the State Department learned that out of 3,500 refugees tested it could only confirm family matches "in fewer than 20 percent of cases." No wonder the secretary of State didn't call a giant press conference to trumpet her department's findings.

The P-3 program has brought upward of 36,000 Africans into the United States just since 2003 (with another 400 arriving from the rest of the world), so what now? Or, in Fact Sheet-speak:

"Q: What measures will be taken against the thousands of refugees who have come into the United States through the P-3 program in the last 20 years?

"A: That is a question for the Department of Homeland Security."

Even as the State Department sends responsibility for this demoralizing incompetence into the ozone, the apparent consequences stay fixed on the ground -- whether in the meatpacking plants of small-town America, where this year's Ramadan was the occasion for workplace strife with mainly Somali Muslims striking over demands for Islamic prayer breaks, or in big-time politics.

In Minnesota, the largest Somali Muslim community in the United States (numbering tens of thousands of people) now holds a key to state political power. This same Somali community has made news before, for example, with attempts by Somali taxi drivers to enforce aspects of Islamic law (Sharia) in refusing to transport passengers with alcohol or seeing-eye dogs due to Islamic prohibitions against alcohol and dogs. But now, as the U.S. Senate race goes to an automatic recount after Sen. Norm Coleman, R-Minn., defeated Democratic challenger Al Franken by a 215-vote margin, Minnesota's Somali community is again making a few headlines.

Rep. Keith Ellison, D-Minn., who famously swore his 2007 oath of office on the Koran as the first Muslim elected to the U.S. House of Representatives, routinely declares that his 7,000-vote margin of victory came from Somali Muslims. Last month, Ellison was campaigning for that same Somali Muslim vote on behalf of Al Franken.

And what's newsworthy about that? In this case, the point is not that Ellison was campaigning for the Somali vote, but rather with whom he was campaigning.

According to AsianTribune.com, after Ellison made a standard, if Somalii-oriented campaign pitch on behalf of Franken before a gathering of Minnesota Somalis, another speaker appeared before the crowd. Described in the report as a "highly regarded prominent Somali traditional leader" -- i.e., a Somali leader from Somalia, not Minnesota -- Abdullahi Ugas Farah spoke on behalf of the Ellison-Franken cause. "In order for Keith to be helpful to the situation in Somalia, you must also elect Al Franken to the Senate," he said.

Now, there's something new on the American hustings: a "Somali traditional" leader. Curious, I Googled Abdullahi Ugas Farah and came up with one news story, a 2003 brief from the Asia Africa Intelligence Wire headlined, "New Islamic court opens in Mogadishu." The story reported that Abdullahi Ugas Farah was one of two speakers who presided over the opening ceremony for a new Sharia court in Mogadishu's Shirkole area.

From Sharia courts in Mogadishu to an Al Franken rally in Minnesota.