Media Sharks Out for Amniotic Fluid 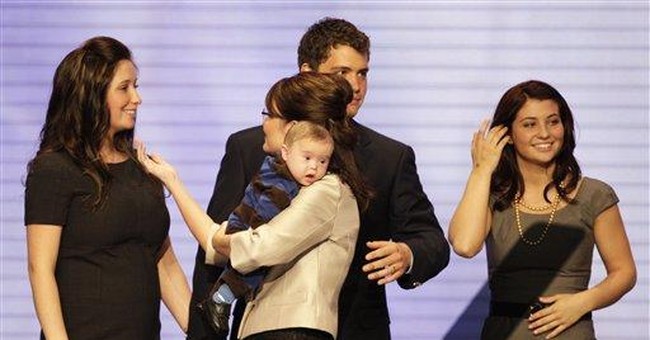 This marker will stand as a testament to the savage zeal with which our mainstream media -- gentlemen (hah) and gentlewomen (double hah) of the Fourth Estate, cosseted darlings of the Free World standing ever-vigilant to ensure that truth will out (hah hah hah) -- have sunk their teeth into the Palin family.

What started on or about Labor Day and has continued ever since, is what's known as a media "feeding frenzy," a condition of non-abating bloodlust for political prey (usually conservative political prey) that is strikingly similar to the agitated state of piranhas in a tank at feeding time. Top McCain strategist Steve Schmidt recently told Washington Post media critic Howard Kurtz that this was the worst feeding frenzy he'd ever seen. I agree and -- if I might flash some old-timer credentials -- I covered the GOP convention in 1988 when Dan Quayle was the bait and Don Kowet, then-media critic for the Washington Times, typed out the phrase "feeding frenzy," giving it a new and enduring currency. In Schmidt's interview with Kurtz, which Kurtz described as "extraordinary" and "emotional," Schmidt explained what it was like to be on the receiving end such an attack.

"The campaign has been inundated by hundreds and hundreds of calls from some of the most respected reporters and news organizations," Schmidt said. "Many reporters have called the campaign and have apologized for asking the questions and said, `Our editors are making us do this, and I am ashamed.'"

What Schmidt went on to relate explains why. The questions have come in, wave after wave, asking, as Kurtz wrote, "whether (Sarah) Palin is really the mother of a 4-month-old baby, whether her amniotic fluid has been tested, and whether she would submit to a DNA test to establish the child's parentage."

More questions: Is Sarah Palin the grandmother of Trig Palin, the 4-month-old born with Downs syndrome, and is her 17-year-old daughter Bristol the mother? Will Trig Palin's birth certificate be made available to the media? Exactly when last April did Sarah Palin go into labor, and did her contractions increase or decrease as she traveled home from Texas to an Alaskan hospital to give birth? And about eldest son, Track Palin, who serves in the Army and is about to deploy to Iraq: Is he a drug addict?

But just think: It was only last week that Barack Obama not typing up his acceptance speech on a computer but instead, as one big league paper put it, "crafting it by hand on a yellow legal pad" passed as news. So what happened to jolt the media from its Obama-PR snooze? The answer is Sarah Palin, rising like Venus on a King Crab Shell, her shiny political luster suddenly casting shadows over the Election Day apotheosis of media deity Barack Obama. In other words, last week's media torpor and this week's journalistic wilding are part of the same phenomenon: the media's uncontainable passion to elect Barack Obama.

I say this having mentally stacked the questions the media have already asked Palin in two days -- intrusive and pointless questions -- against the glaringly obvious questions the media have never asked Obama in two years. Schmidt noted that "the media is asking more questions about Palin's pregnant daughter" than about Tony Rezko, the Chicago fixer and Obama patron recently convicted on corruption charges, but that's just the first item on a long list of passes the media have given Obama, passes on vital matters of character, judgment and political belief.

These range from the media's protective hesitation on his long-term relationship with former Weather Underground leader William Ayers, to their near-total absence of interest in his recent campaign choice for Muslim outreach, a young man with affiliations to not one, but four organizations with ties to the Muslim Brotherhood.

(The man, Mazen Asbahi, resigned in early August after one article about him appeared in the Wall Street Journal. A national security source of mine is still shaking his head in disbelief over ensuing media disinterest in this shocking story.)

More recently, Daniel Pipes put together a must-read survey of attitudes toward Obama throughout the Islamic world -- there is a widespread assumption that Obama would make a pro-Islamic president despite equally widespread confusion over his official status in Islam -- which would provide any Obama campaign reporter with plenty of material on which to base a discerning interview on the long-term strategic implications of this reality.

But no one, and I mean no one, is taking the bait. And certainly not now. Not when a conservative Republican woman's amniotic fluid is in the water.