Paying Islam For Our Western Guilt 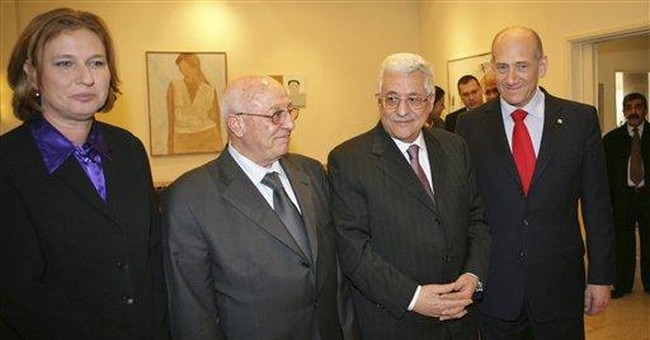 Christmas came early to the Palestinian Authority when the "international community" decided not only to meet PA President Mahmoud Abbas' request for $5.6 billion in aid, but to throw in almost $2 billion more. Why? Did the PA end its terrorist ways? Stop state-sanctioned incitement against Israel and the West? Change Fatah's charter (forget about Hamas) calling for Israel's destruction?

Alas, no, no and no. We are heaping riches on the PA for other reasons, one of which I discuss below.

But first, a digression: Christmas, obviously, doesn't come to the PA, even if Western billions do. Despite a tiny (and decreasing) number of Christians, the PA is a land of Islam -- Dar al-Islam. That makes Israel, the object of the PA's destructive animus, Dar al-Harb, land of war, right?

Right. But not according to the PC script of the "international community." We never, ever discuss the Islamic context of "Arab-Israeli" conflicts. But how else can we hope to understand them? Jihad ideology inspires the Arab struggle against Israel. It also explains it. As the only non-Muslim country amid Middle Eastern Dar-al Islam, as the only "dhimmi" nation to reclaim its land once conquered by Islam, Israel's very existence is a religious offense to the "umma," or Islamic community. In this same context, what we call "foreign aid" to the PA may be understood as a form of "jizya," the protection money paid to Muslims by non-Muslims.

But the non-Muslim world prefers not to think like that. We avert our collective eye from the goals of jihad, from the history and teachings of Islam. Instead, we see ourselves as villains -- Israel for its existence, and Israel's supporters for, well, their support for Israel's existence.

In so doing, we create a sinkhole of Western guilt and responsibility for suffering Muslims, in this case in the PA. They suffer not as a consequence of their religio-political bloodlust to destroy the Jews in Israel (the nearest infidels), but because there are Jews in Israel. In other words, it's everyone else's fault but their own. Islam -- particularly, jihadist ideology -- is not to blame. Throw more money down the hole.

Of course, this works only until we stop misreading such ideology. And how long will that take? Probably forever -- so long as we continue leaning on the same authorities who got us into this mental mess in the first place.

As it happens, I began the calendar year thinking about this subject -- exonerating Islam -- while discussing a PBS documentary on anti-Semitism in the Islamic world. The show's conclusion: What isn't Israel's fault is that of the West.

Well, you can't expect much more from (lefty) PBS. What was startling about the message, however, was one of the messenger's: none other than the eminent historian Bernard Lewis. He declared that anti-Semitism didn't even exist in the Middle East until European Christian colonizers brought it. You don't need to be a scholar of Lewis' stature to know that European colonization of the Middle East didn't begin until some 1,100 years after Islamic anti-Semitism got going in the Koran, the canonical commentaries on the Koran, and in a long and painful (for Christians also) historical record.

Because Lewis is probably the most influential voice on Islam in our time -- particularly for the U.S. foreign policy establishment -- his pronouncements are more than significant. Right or, in this case, wrong, they become the conventional wisdom, or reinforce it.

This comes to mind because Lewis has done it again -- holding Europe responsible for unpalatable traditions of Islam. Writing at The American Thinker blog, Andrew Bostom, author of "The Legacy of Jihad" (Prometheus, 2005) and, forthcoming, "The Legacy of Islamic Anti-Semitism," quotes a recent speech in which Lewis said: "The authoritarianism present in the Middle East region is not part of the Arab and Muslim traditions, but it has been imported from Europe."

Bostom goes on to cite copious chapter and verse -- including earlier writings by Lewis himself -- demonstrating that "the Arab and Muslim tradition" needed no lessons from Europe on authoritarianism.

Why is Lewis making statements contradicted by the historical record? If European Christendom truly is the source of Islamic evil -- e.g., anti-Semitism and authoritarianism -- Islam is let off the hook, and blame falls on the West. Whether that is Lewis' point, it is certainly Lewis' effect.

And it is certainly the conventional wisdom. Not very wise, though, when it helps feed the kind of guilt assuaged only by giving billions of dollars to murderers and thieves.