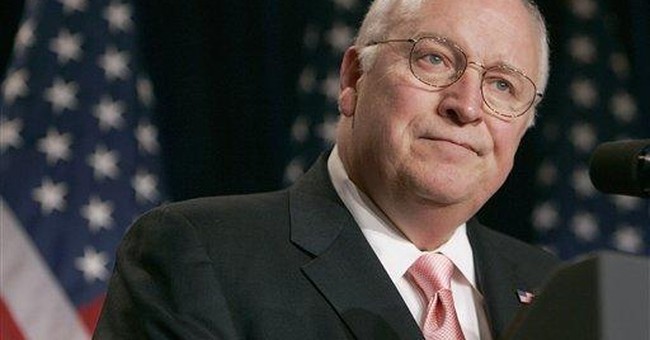 For precisely two hours and five minutes on the morning of July 21, 2007, there was something different about our world.

The occasion was less than earth-shaking -- a routine colonoscopy that required the president to be placed under general anesthesia. Bush underwent the same procedure back in the summer of 2002, transferring presidential powers to Cheney for the first, uneventful time.

But what a difference a second colonoscopy makes -- or so Cheney might have thought as he prepared to assume presidential powers from his vacation perch on Maryland's Eastern Shore. During the first procedure, the country was still in the patriotic throes of the early post-9/11 age. The Taliban were on the run, our mistakes in Iraq were unimagined, the president was committed to opposing -- better, destroying -- terror networks and the nations that support them. Even the president's cozy, border-lite relationship with then-president of Mexico Vicente Fox was in temporary abeyance.

Five years later, Iraq is a mess. The administration's lodestar policy of fighting terrorists has given way to free-falling "security" talks with Iran -- currently, the most malignant jihadist threat. The president's diplomatic freeze on the late, unlamented Yasser Arafat has melted into a warm embrace for Fatah, the party Arafat founded, now headed by Mahmoud Abbas, a Holocaust-denier, among other things. And who could forget the president's recent amnesty debacle? And still the borders are undefended.

Well, what could he do? Cheney must have thought. He was only a vice president. And then, suddenly, a distant ruffle of drums rose up, as if from the bay, preceding the faintest strains of "Hail to the Chief," and we dissolve to ... An aide tentatively approached Cheney. Now, according to the constitutional powers vested in someone or other ...

"Well, Mr. 'President,' said the aide, breaking his bitter reverie. "What should we do now? Settle in to watch the British Open until Mr. Bush comes to?" Mr. Cheney's eyes followed the rising arc of a bird over the water.

"I want an Executive Order form, and I want it now."

Mr. Cheney checked his watch. It was already 35 minutes into his "presidential" term, but he had plenty of time left to issue presidential pardons for border agents Ignacio Ramos and Jose Alonso Compean (now serving excessively harsh terms for reportedly wounding a fleeing drug smuggler following a struggle). And while he was at it, what about presidential recognition for the service of some of our great soldiers who have been overzealously prosecuted after fighting in Iraq and left out to dry by their commander in chief? "Let's gets these pardons going. I'd also like to issue some presidential proclamations, starting with Col. Allen West and Lt. Ilario Pantano, thanking these men for their military service and apologizing for not recognizing their gallantry sooner," Cheney said.

He chuckled as he signed the orders pardoning the agents and thanking the soldiers.

Cheney sat down on a sofa, still holding his pen, still thinking. Broken borders. Broken Iraq. Genocidal Iran. The Saudis -- how could Bush hold hands with them? Yuck. But what could he, Cheney, do about it, and quick? "Something that goes unnoticed," his aide offered helpfully, getting into the presidential swing of things.

"Unnoticed," Cheney said. "Too bad asking Condi for her resignation would be noticed. So would an executive order to drill in the Arctic National Wildlife Refuge, or my idea for defunding those treasonous so-called sanctuary cities. What can we do about Iraq, irrevocable or unnoticed, in the next hour?"

"Well, sir, remember that Diana West column you liked so much that pointed out that whatever we do in Iraq, we won't be addressing the real national security threats posed by jihadist Iran, Syria -- not to mention Saudi Arabia. The real question is, what can you as president do in the next hour about Iran?"

Cheney's jaw set. "Right. I need a general, a good general. Who are those generals I like on Fox News? Call somebody like that."

He drummed his fingers on the table while his aide dialed and passed him the phone.

"Hello, general? Yes, Dick Cheney here. Listen, I'm president this morning -- right, George is having that procedure again -- no, nothing serious. I just wanted to fix a few problems while he's, you know, recuperating...yes. I want to hit Iran and I want to hit it now -- really knock out its offensive capability so it can't make nuclear bombs, kill our troops in Iraq, support Hezbollah, the Taliban, Hamas -- you know, everything. It's always stuck in my craw that we never responded to any of their assaults on us. I mean, think about the embassy seizure in 1979. Think about Khobar Towers in 1996. Think about Hezbollah, Iran's proxy army, and those 243 Marines killed in their barracks in 1983, and what they did to CIA station chief William Buckley, and on and on. You got anything in mind?"

He paused. "Uh-huh, uh-huh...uh-huh. Really? OK. Great, general. I'll call the Joint Chiefs and give them your recommendations."

"President" Cheney hung up and smiled. "One more call, and we make the world safe for democracies."

Suddenly, as abruptly as the music had begun, it stopped. All that was audible was the sound of hushed, televised commentary of the British Open.

"Mr. President! How are you, sir? Good. No, nothing out of the ordinary. In fact, I must have fallen asleep." He checked his watch. Precisely two hours and five minutes had passed since he sat down in front of the TV set.

"Yes, I'll be happy to tell the press. Just a routine Saturday morning."

A Group Of Parents Sent Their Kids' Face Masks to A Lab for Analysis. Here's What They Found
Townhall
Insane: Critical Race Theory proponents are genuinely pissed at Senate GOP for 'insulting' them by supporting federal Juneteenth holiday
Twitchy
Biden Just Made a Huge Mistake With Putin and Handlers Race to Clean up the Mess Again
Redstate
Atlanta May Be Headed for a Final Divorce as Communities Nationwide Seek to Redraw the Lines
PJ Media