The PC end of the English-speaking peoples? 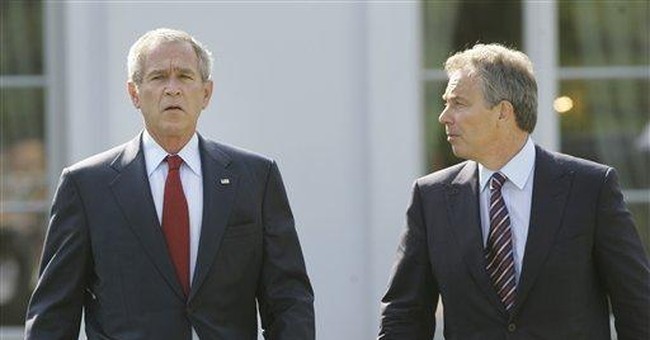 As Tony Blair prepares to leave 10 Downing St., "Muhammad" is the second-most popular name in Britain.

As George W. Bush is finally deserted by his long-suffering conservative base, "Jose" is not the second-most popular name in the United States. But Spanish, as yet unofficially, is America's second language.

Is this a shocking turn of events? You bet.

Of course, to anyone who remembers the "Behead Those Who Insult Islam" posters displayed in London last year, the Islamization of Britain may seem long obvious. But that doesn't mean it isn't startling to see, quantified, in a government tally of baby names, a reliable indicator of the increasingly Muslim future of Britain.

Similarly, to anyone beset by bilingualism, in both business and the business of daily life, the Hispanization of America is currently a fact. But that doesn't mean there isn't an almost-tangible gut check, say, in reading about the extent to which 2008 American presidential candidates, Republicans and Democrats alike, are gearing up Spanish-speaking drives within their English-speaking campaigns to vie for Spanish-speaking voters.

Rep. Tom Tancredo, R-Colo., is the principled exception, believing, as he has said, that where a bilingual individual gains an advantage, a bilingual country suffers from irreparable fragmentation because the disappearance of a common language leads to the end of a common culture. If the U.S. Senate effectively legalizes 12 million to 20 million mostly Spanish-speaking illegal aliens -- a mainly Mexican bloc which, ironically, is anything but "diverse"-- the common language (English) and common culture (American) slip that much farther away.

It's inevitable. This Spanish-speaking demographic is simply too massive to assimilate -- even assuming the multicultural states of America were still in the assimilation business, which we're emphatically not.

And that's shocking, too. But more than shocking, this whole issue is depressing and distressing -- although I know I'm not supposed to say so.

Whenever anyone has the bad taste to point out markers of cultural transformation, the rest of us are supposed to play it very cool, expressing only the most noncommittal reaction, if any at all. We're not supposed to flinch, and we're certainly not supposed to lament such changes, or mourn what is being lost, or, heaven help us, do anything to stop or reverse them, such as demanding the enforcement of existing immigration laws that would both encourage the repatriation of illegal aliens and discourage more from coming.

The socially acceptable position, the one that qualifies as politically correct wisdom suitable to be shouted from rooftops (or written in The Wall Street Journal editorial page), is to accept phenomena such as the Islamization of Britain and the Hispanization of the United States as givens, as progress, as proof of one's own moral goodness. Anything less than regarding these wholly optional changes, ours to make or not, as national destiny -- international destiny? -- is denounced as malicious bigotry.

In this way our conception of ourselves as an existing culture -- open to modification and growth, yes, but not irreversible transformation -- has been grossly undermined. Not only are the traditions and characteristics (English-speaking? Non-Muslim?) of our societies now regarded as being retrograde embarrassments, we are also supposed to cheerfully maintain our societies in a perpetual state of ethnic and/or religious flux. The irony that goes unremarked is that the homogenous -- dare I say, nondiverse? -- nature of Islamic and Hispanic countries sending forth immigrants remains immutable. Which is why it won't matter much to the world if the United States ever becomes the 18th Spanish-speaking country in the Western Hemisphere, and if Britain ever becomes the 57th nation in the Organization of the Islamic Conference.

Except, that is, to those who would lament the passing of the English-speaking peoples. President Bush and Prime Minister Blair obviously don't belong to such a group, but who does? The group exists in shamed silence, having bought the PC line that cultural self-preservation -- Western self-preservation, that is--is nothing but an exercise in crude racism. But is it really? If we never hear any answer but "yes," it's time to get out the handkerchiefs and weep, silently.