America must not ignore a dangerous percentage 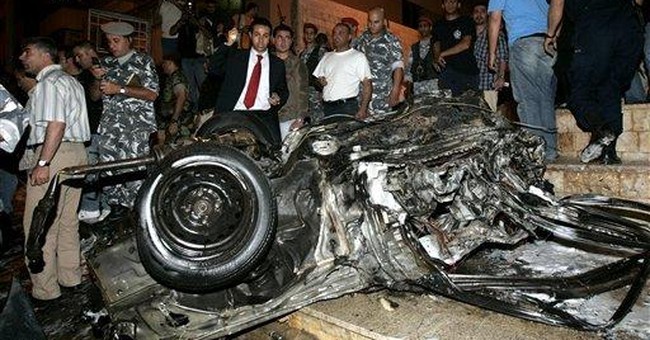 Funny how small 26 percent sounds when it describes, for example, the number of American voters who support the Senate's mass-amnesty, goody-bag bill for illegal aliens. In this case, the one in four people polled by Rasmussen this week who hope the legislation passes comes off as a minority voice, especially when compared to the whopping 72 percent of voters who favor border enforcement and the reduction of illegal immigration.

But 26 percent looms large when it describes the number of American Muslims, ages 18-29, who support suicide bombings "in defense of Islam" -- one of the sensational, if sensationally underreported, findings of a recent Pew poll.

According to Pew, the total Muslim population in America is 2.35 million, 30 percent of whom are between 18 and 29. By my figuring, the suicide-bomb-approving cohort works out to 183,000 people. The poll also tells us that 69 percent of younger American Muslims say suicide bombings are never justified. While representing a majority almost as great as the percentage of American voters who favor border enforcement, 69 percent in this particular case is wholly inadequate; indeed, a strikingly poor showing.

In the case of the immigration bill, the poll reflects public opinion pertaining to a political process, a no-holds-barred, expletive-laced, free-for-all that, loathsome as it may sometimes seem, remains democratically rooted in a nonviolent contest of ideas, politics and flim-flam. In such a context, one-quarter of anything pales next to three-quarters of anything.

In the case of suicide bombing, however, the context changes. According to Pew's data, one-quarter of younger American Muslims approve of the presence of skin-ripping, skull-crushing, organ-piercing violence in civilian life as a religious imperative -- "in defense of Islam." (The Pew pollsters declined to define "defense of Islam," but having lived through Pope Rage, Cartoon Rage, Koran Rage, Satanic Verses Rage, etc., I think it's safe to say this is a rather broad category.)

Such approval for religious violence is not just another unfettered political opinion finding expression in a poll-taker's tally. On the contrary, the fact that a significant young chunk of American Islam believes such violence has a place in society indicates something closer to the end of unfettered political opinion. It may signal the beginning of physical coercion as a factor in the American political process. Which helps explain why the 69 percent figure is no consolation prize; only unanimity is acceptable here.

It's not that a physical fear factor pertaining to mainly Islamic terrorism hasn't long existed -- just take a look at the dispiriting security perimeter erected around the Capitol, for instance. But this Pew poll may mark the first official acknowledgement that such violence and, equally important, the threat of such violence, actually find approval within the American polity.

Something new and barbarous under the sun, right? This is why it's all the more disturbing to review the happy headline-spin the story received. The blogger Ace of Spades provided an early roundup of the Orwellian tags, which included: "Poll: Most Muslims seek to adopt American lifestyle" (USA Today); "Muslims assimilate better in U.S. than Europe, poll finds" (New York Times); "Poll: U.S. Muslims Feel Post-9/11 Backlash Despite Moderate Outlook" (Voice of America). My personal fave: "Upbeat portrait of U.S. Muslims" (Sacramento Bee). The accompanying stories were no less giddy.

But why the journalistic rush to depict the shocking story as so much happy talk? Therein lies a tale, one of fanatical religious fervor -- on the part of the mainstream media (MSM). Like other politically correct elites, the MSM follow their own version of the "true faith": multiculturalism.

That is, is there something more desirable about societies that don't inspire and glorify suicide bombings -- something worth preserving? Conversely, is there something about Islam our own society requires protection against? This is very tricky territory for the MSM. The logical answers are multiculturally blasphemous.

The MSM response: Better to say nothing at all. Or better yet, just smile. Big grin. Happy story. It's one measly quarter, after all. Just one in four. And isn't that something to be upbeat about?