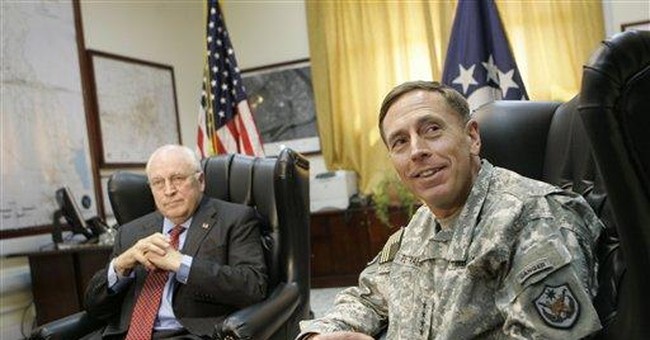 "This fight depends on securing the population, which must understand that we -- not our enemies -- occupy the moral high ground." -- Gen. David Petraeus, May 10, 2007

Oh, they must, must they?

With his single sentence, Gen. Petraeus reveals what's wrong with our Iraq policy. Success depends not on our own actions, but on a politically correct expectation of how Iraqis will react to those actions. It seems that victory depends on something over which we have no control -- the point of view and behavior of people in Iraq.

Consider the "surge." Even if our troops achieve the goal of "securing the population" by securing Baghdad, success still rides on subsequent Iraqi behavior: whether murderously competing Iraqi sects decide to come together and sing "Kumbaya" -- what you might call a big "whether."

Somehow, I'm practically alone among conservatives in believing this to be a dangerously ill-conceived policy (Surrender-crats aren't worth discussing here), and I think I know why. The Iraq policy itself is an outgrowth of another dangerously ill-conceived policy of our leaders to avoid any rational assessment of the Islamic culture that informs the point of view and behavior of people across the Fertile Crescent in the first place. In other words, most people with even an elemental understanding of institutional Islamic antipathies toward non-Muslims and non-Muslim culture would balk at spending blood and treasure for Gen. Petraeus' "hearts and minds" strategy. Such a criterion, sadly, disqualifies our deeply Islam-challenged elites, all of whom seem to have missed the fact that "moral high ground" in Islam makes room for suicide-bombing terrorists. No wonder our guys are having trouble.

Still, we persist in ordering American forces onto Iraq's meanest streets to "win over the trust and allegiance of the civilians," as a Weekly Standard report on Gen. Petraeus' counter-insurgency plan recently put it. What goes unconsidered is why, after all the lives and limbs our troops have already lost in Iraq, after all the lollipops our troops have already passed around Iraq, Iraqi "trust" and "allegiance" aren't already ours for the asking. Could it be that most of the Muslims who make up about 99.99 percent of the Iraqi population simply don't trust infidel armies? Could it be that they only offer allegiance to fellow Muslims?

Such questions never enter into PC policymaking. The problem, PC-policymakers maintain, is ours alone. Maybe we did topple Saddam Hussein, fight Islamic terror troops, and bring democracy and air conditioners to a benighted land. But that's not enough to win "hearts and minds," or so the PC theory goes. And that's where the new counterinsurgency strategy comes in -- killing the enemy while, as the Standard wrote, "spending time with the (Iraqi) people, getting to know them and building relationships with them."

Gee. Is this a war plan, or a Miss Universe contest?

Recently, I came across a heart-stopping story from "A Man Called Intrepid," William Stevenson's book about World War II intelligence operations. It concerned a ghastly, brilliant British air raid on Copenhagen in spring 1945. The objective, next door to a school, was a Gestapo prison. There, Danish underground leaders were being tortured, thus compromising the entire underground network and bona fide nuclear secrets and potentially resulting in the diversion of 200,000 German troops to fight American forces. The air raid was a stunning success. It was also a terrible tragedy. Not only did the British lose 10 airmen, but 27 teachers and 87 children were killed, with many more civilians badly injured.

The battlefields then and now have few parallels, but imagine, for a moment, that 87 children were killed in an important air raid in terror-riddled Baghdad, not Nazi-occupied Copenhagen. Imagine, also, the ensuing mayhem and media amplification of an "irreparable blow to the battle for Iraqi `hearts and minds.'"

Now, back to the historical account: One of the raid's planners, Ted Sismore, later returned to the bombed school in Copenhagen to offer an explanation. "The parents of the dead children, to his astonishment, gave him comfort. 'They wanted me to know the raid was necessary.'"

The Danes knew his heart, and were of one mind. This could hardly be more different from Iraq for many reasons, including cultural ones separating Islamic and Western cultures. Gen. Petraeus decrees Iraqis "must understand that we -- not our enemies -- occupy the moral high ground." But does their political-religious culture even permit such an understanding? We must face up to this question if we ever want a winning war plan.