Doing the 'bump' with Iran? Why? 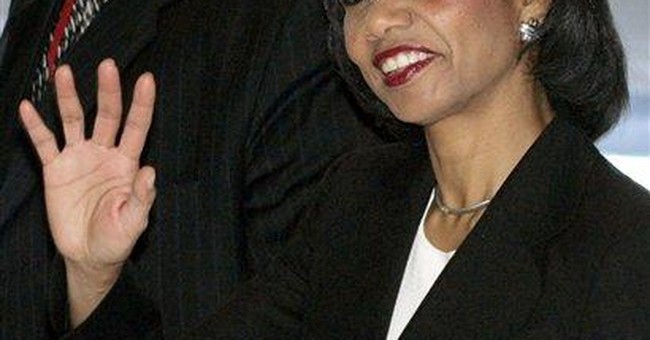 Marvelous, isn't it, that Secretary of State Condoleezza Rice traveled to an Egyptian resort for a summit on stabilizing Iraq that was attended by, among other "neighbors" and interested parties, Iran and Syria. I mean, who better to discuss stabilizing Iraq than the very countries that are actually trying to de-stabilize it?

Such wily statecraft. Now I see how it works: Only honest-to-goodness state sponsors of terrorism like Iran or Syria can really understand what it takes to stabilize a country, since it's only honest-to-goodness state sponsors of terrorism like Iran and Syria that really understand what it takes to destabilize it -- what it takes to smuggle into Iraq men and munitions, including deadly IEDs; what it takes to organize and sustain resistance to our utopian efforts. Iranian and Syrian expertise on such matters will prove invaluable to those same utopian efforts, right? After all, as Rice put it, "Iraq's neighbors have everything at stake here. Iraq is at the center of a stable Middle East or an unstable Middle East. We should therefore align our policies in ways that contribute to stability."

"Therefore." Isn't that brilliant? Never mind that Iran and Syria are in many ways responsible for the unstable Middle East Rice is talking about. Let's "therefore align our policies" just the same. Meanwhile, why haven't we thought of talking with terror-states before?

At least we're starting at the top with Iran. In time for the conference, the State Department issued its annual global terrorism survey, crowning Iran the leading state sponsor of terrorism in the world. (Congrats, Mahmoud Ahmadinejad!) Let's hope Condi remembered to take along a copy to present to Manouchehr Mottaki, the Iranian foreign minister she was supposed to "bump" into somewhere or other at the resort -- at the conference table, or was it the pool? Or was he supposed to "bump" into her? What was it the president said again?

"Should the foreign minister of Iran bump into Condi Rice, Condi won't be rude; she's not a rude person. I'm sure she'll be polite," said Bush. "She'll also be firm in reminding the representative of the Iranian government that there's a better way forward for the Iranian people than isolation."

Polite ... firm ... better way forward. Clearly, the Great Satan lives. As Condi later roared, all fire and brimstone, "If we encounter each other then I am certainly planning to be polite and see what that encounter brings."

Phew. Americans can thank goodness for that. If there's one thing we want to be with the leading state sponsor of terrorism in the world, it's polite. Maybe Rice could politely inscribe the terrorism report to the Iranian foreign minister. Maybe he could politely inscribe it back to her. I can see it now, that old Iranian proverb: "Dear Condi -- Never give a sucker an even break." Enough sarcasm. No amount of metaphorical acid dropped on this sorry event can cover up either the futility or the shame of negotiations with the jihadist state of Iran and its fellow state sponsor of jihadist terrorism, Syria. And such negotiations, whether via "bumping into," or "on the sidelines," were exactly what the breathless run-up to the Egyptian conference was all about. "That meeting," explained Undersecretary of State Nicholas Burns, "will be important because Secretary Rice will be seated around a table with the Syrian foreign minister, and we hope and think with the Iranian foreign minister."

Yuck. Since when does an Iranian foreign minister, let alone a Syrian foreign minister, count as the belle of the ball? There's something unseemly about this diplomatic courtship, which follows not a single concession on Iranian and Syrian support for Hezbollah and assorted Palestinian terror groups, their deadly interference in Iraq, or their failure to corral Al Qaeda operatives. In the case of Iran, this all-too-hot political pursuit rages on despite its flouting international rules governing its nuclear program, and its barbaric call for the genocidal eradication of the state of Israel.

But there's something else. American soldiers now die and are maimed because of such belligerence. Not so very long ago, Beirut CIA station chief William Buckley, Navy diver Robert Stethem, and Marine Col. William Higgins all fell to Iranian-sponsored, Hezbollah terrorism, suffering horrendous beatings and torture before they died, unavenged.

When will it occur to our leaders that Iran is already in a state of war with us? Surely, that's nothing to be "polite" about.