Who's in charge? Might as well be John Kerry 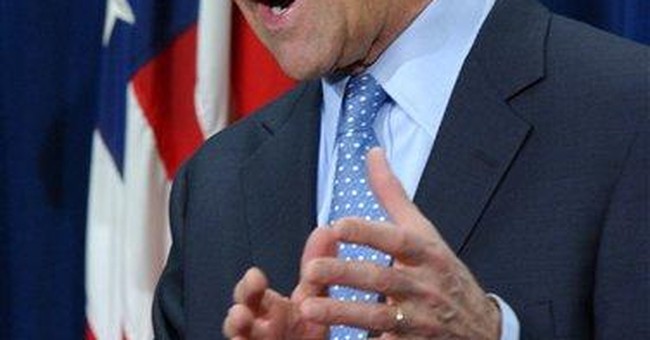 Maybe it's impossible to feel nostalgia for what has never been, but that doesn't mean I don't find myself wishfully thinking about the Kerry administration that never was. That's because if we were just now into the third year of John Kerry's first presidential term, all of the horrible things going wrong in the world would make a lot more sense.

For example, if, under President Kerry, the director of National Intelligence announced that Osama bin Laden and his deputy, Ayman al Zawahri, were re-establishing Al Qaeda training camps in Northwest Pakistan, the apparent lack of American action on such stunning news would seem OK -- well, not OK, but the inaction itself would be something we had long grown used to. It would come quite naturally, then, to rail at President Kerry for trying to take Osama bin Laden's picture via satellite, but not trying to take him out.

It would come quite naturally to think: If only George W. Bush had won that second term.

Instead, the former president would probably be living large on his Texas ranch. While Americans despaired over, say, President Kerry's latest immigration nightmare -- still-unsecured borders, pending amnesty for millions of illegal aliens, zealously prosecuted border agents -- W. would be playing host, down-home but dignified, to the occasional reunion with Bush-II-1 alumni. Maybe he would have learned to ride a horse by now, just to release a nice photo now and then of the rider on the range (very Reaganesque), something for conservatives to regard with political longing while suffering through Monsieur Kerry's latest notion of presidential.

And that notion surely would have included something as cockamamie as the "neighbors' meeting" on Iraq that was recently announced. This diplomatic potluck, calculated to seat jihad network "neighbors" Iran and Syria at the table alongside the United States, Britain, France, Russia, China, the Arab League and, of course, Iraq, might easily have had "Kerry administration" written all over it. But it is, unhappily, a Bush administration initiative, a new riff on the defunct Bush Doctrine: "You're either for us, or you're against us -- we don't care which."

What happened to the policy of not negotiating with terror-states like Iran? It's gone, apparently, replaced by a deadly confusion of cross-purposes. We want peace and stability in Iraq; Iran is already at war with us to destabilize Iraq and drive us from the region. We want Israel to live long and prosper; Iran supports Hezbollah and openly promises "to wipe Israel off the face of the map."

There is an even greater problem with the premise of these negotiations. Iran's Mahmoud Ahmadinejad is someone whose concerns have far less to do with this world than the "next," whose rationale is shaped not by the consequences of economic sanctions or air raids, but rather by a Islamic vision of the apocalypse. Indeed, as the Hudson Institute's Laurent Murawiec has pointed out, Ahmadinejad, while mayor of Tehran, "insistently proposed that the main thoroughfares of Tehran should be widened so that, he explained, on the day of his reappearance, the Hidden Imam, Mohamed ibn Hassan, who went into the great occultation in 941 A.D., could tread spacious avenues."

This not-so-trivial Ahmadinejad trivia came from a trenchant speech entitled "Deterring Those Who Are Already Dead?" in which Murawiec analyzed the jihadist mindset in thrall to violence, death and the afterlife. One conclusion: "Contemporary jihad is not a matter of politics at all (of `occupation,' of `grievances,' of colonialism, neocolonialism, imperialism and Zionism), but a matter of Gnostic faith. Consequently, attempts at dealing with the problem politically will not even touch it."

This, in Murawiec's analysis, neutralizes strategies of deterrence. It would also seem to upend any dangerously nave hopes for a level negotiating table in Baghdad. "Deterrence only works if the enemy is able and willing to enter the same calculus," Murawiec wrote. "If the enemy plays by other rules and calculates by other means" -- the triumph of Allah on earth, for instance -- "he will not be deterred."

But he will come, it seems, to Baghdad to meet with ... the Bush administration.