The Education of Cully Stimson 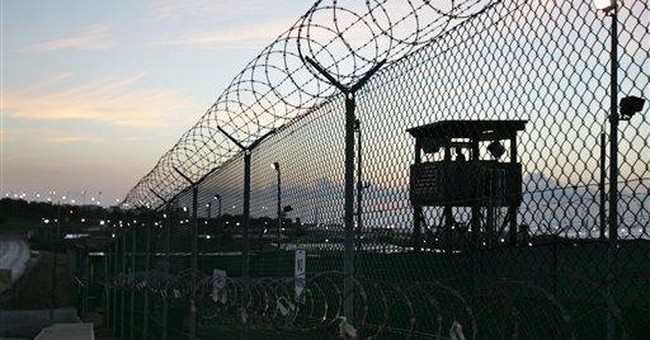 Imagine waiting for that other shoe to drop only to realize it has kicked you in the pants. That's how I imagine the current state of mind of Cully Stimson, the deputy assistant secretary of defense for detainee affairs, i.e. jihad terrorists captured by the U.S. on the global battlefield and incarcerated in Guantanamo Bay, Cuba.

How did Mr. Stimson go from practically smug to very sore? Last week, the Pentagon official declared in a radio interview that it was "shocking" the extent to which the nation's top law firms, whether pro bono or paid, represent terrorists in Gitmo. Ticking off a roster of so-called white-shoe firms that make up what's known as the Guantanamo Bar, Mr. Stimson predicted that when these same firms' corporate clients discover they share legal counsel with terrorists -- "the very terrorists who hit their bottom line back in 2001," he added -- they would "make those law firms choose between representing terrorists and representing reputable firms."

I, for one -- and probably the only one -- was impressed. Here was a Pentagon official who seemed to believe that not only was there a dividing line between representing terrorists and representing businesses, but there was also a connection between helping those terrorists and hurting those businesses. Quaint thought. In our advanced state of political correctness, such a line is crossed so often and so enthusiastically by our legal elites and others that it has disappeared altogether. Indeed, we live in a day when one man's wanted terrorist is another man's prized pro bono client. But Mr. Stimson seemed not to have noticed. He actually thought that if Big Business knew Big Law was rushing to defend enemy combatants committed to the destruction of this country (not to mention Big Business and Big Law), CEOs would pressure legal elites to withdraw from the Guantanamo Bar. After all, what's good for Guantanamo is not good for the country. Time to win one for the Babbitt.

That was then. I don't think Mr. Stimson even saw what was coming next: An avalanche of moral outrage and high dudgeon that flattened him for suggesting that anything but moral kudos and undying gratitude are due fat cat lawyers who see to it that Al Qaeda terrorists -- sorry, people in legal trouble -- have due process under U.S. law. So what if they want to blow up U.S. law? Our best and brightest have determined they are owed due process first. What makes us succeed as a country isn't keeping soldiers of jihad away from our people (how crass) but rather providing them with the legal mumbo jumbo to get out of jail (how enlightened).

And woe to anyone whose heart doesn't swell at the sight. The notion, as imagined by Mr. Stimson, that a non-terrorist client might actually disapprove of this enthusiastically offered legal largesse was depicted as downright un-American. For that matter, so was Mr. Stimson. Not even his colleagues at the Pentagon supported him for suggesting that the veritable stampede of white shoes to Gitmo was the least bit unseemly.

Then, quite suddenly, Cully Stimson changed his mind. In a letter to the Washington Post, he recanted all. "During a radio interview last week, I brought up the topic of pro bono work and habeas corpus representation of detainees in Guantanamo Bay, Cuba. Regrettably, my comments left the impression that I questioned the integrity of those engaged in the zealous defense of detainees in Guantanamo. I do not ... I apologize for what I said to those lawyers who are representing clients at Guantanamo. I hope that my record of public service makes clear that those comments do no reflect my core beliefs."

I guess that's what they call an about-face. What's more interesting than the dust kicked up, though, is the nave notion that got Cully Stimson into trouble in the first place. This would be his apparent belief that in 21st-century America there still exists what we think of as an establishment that automatically identifies American interests with victories against terrorists. The fact is, a victory for Gitmo due process isn't the same as a victory in the "war on terror." What probably eluded Mr. Stimson is that along with the very nature of the establishment, the definition of victory has also changed. Even more confusing is that so, too, has the definition of the enemy.