The State Of Our Union…

Derek Hunter
|
Posted: Mar 01, 2022 12:01 AM
Share   Tweet
The opinions expressed by columnists are their own and do not necessarily represent the views of Townhall.com. 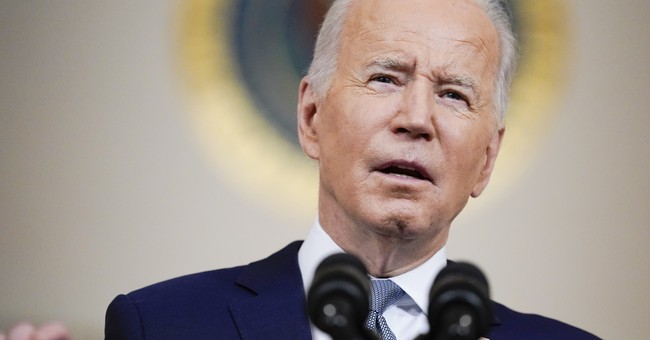 Tonight, President Joe Biden will stay up past his bedtime for the first time in a while to read a teleprompter for about an hour to a room full of people who couldn’t care less what words come out of his pie hole. It’s State of the Union Address time and rarely have fewer people given a damn what a President of the United States will say.

It’s actually hard to be as unpopular as Joe Biden. When you get down to the mid-30s in approval rating you’re dipping into the pool of people who will support almost anything you do. A President of either party will pull 40 percent by simply being of the party, Biden is as low as the low 30s in some polls, which is like an animal abuser level of support. Joe’s more like an abusive NFL player than a politician.

So what will he say? What can he say? Forget love, Joe is a man desperate to be liked, even a little. But he’s played all his “good” cards, what does he have left?

He will likely stand there and claim the economy is strong and that it’s all thanks to him. To the extent that the economy is doing well, it has nothing to do with him. In fact, it is in spite of him.

Biden’s “Governing through printing money” approach is everything wrong today. You’re paying more at the pump, grocery store, and everywhere else because of him. He has to deny that, to blame “greedy corporations,” because he still wants to spend more.

Expect the President to try to push “Build Back Better,” trillions more in government spending on top of the trillions already spent. Our government has printed so much money they haven’t even come close to spending what they’ve already approved. Rather than do something semi-sane like reallocate unspent money they’ve already printed, they want to print more on top of it all. Honestly, who would’ve thought Biden would adopt the Zimbabwe model of economics?

Ironically, the exact opposite of “Build Back Better” is all that is needed right now. We don’t need more printing and spending, we need the government to get the hell out of the way; to stand back and do nothing. The amazing thing about markets and capitalism isn’t that there aren’t problems, it’s that those problems fix themselves. Government can only create more problems and make existing ones worse. As long as Biden has been alive, you’d think he would’ve picked up on that.

Joe will have to talk tough about Ukraine, but just how tough remains to be seen. The European Union is leading on this, on the severity of sanctions and their targets. When even Switzerland is tougher on the Russian economy than the Biden administration, which specifically exempted oil and gas sales from restriction, you know you’re doing something wrong. All any of history’s greatest monsters had to do was get their money to Geneva and they were home free, and even they are hitting Putin and his cronies where it hurts. Biden, not so much.

While Joe has to talk about Ukraine, expect him to spend more time talking about his Supreme Court nominee. Judge Ketanji Jackson will, baring something supremely scandalous coming out, be sitting on the Supreme Court in the fall. No one cares.

His appointment won’t change the balance of the Court in the slightest – one leftist replacing another. But Biden and Democrats will pretend they’ve saved the Republic. Moreover, they’ll celebrate her for the color of her skin, dutifully avoiding the content of her character or her professional history. It will go unmentioned how what Democrats are doing with Jackson is the antithesis of Martin Luther King’s dream, the way it goes unmentioned that he was fighting the oppression Democrats brought down on black people when he gave that speech. History starts anew every day for the left.

Biden’s State of the Union Address will be declared a triumph by the same people propping up with lip-minded body Weekend at Bernie’s-style. Their responses are likely already written, with many of them having a hand in crafting the speech.

But the truth is, the state of our union is not strong. The President ignores or attacks half the country on a regular basis, is less popular than a kick to the groin, and in every conceivable way is making things worse. He won’t say that, and you likely won’t hear that on TV tonight. But it needs to be said.