The True Face Of Racism

Derek Hunter
|
Posted: May 02, 2021 12:01 AM
Share   Tweet
The opinions expressed by columnists are their own and do not necessarily represent the views of Townhall.com. 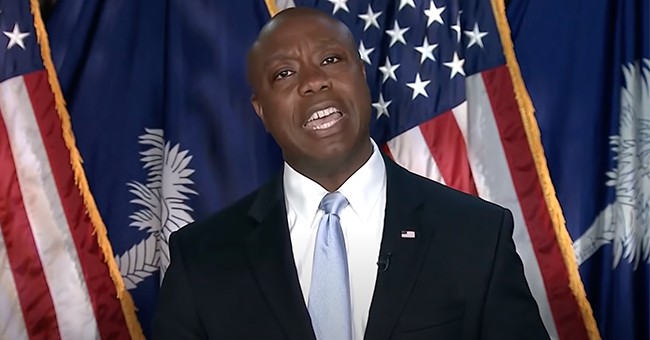 How liberals live with themselves is something I will never understand. I’m kind of happy about that, actually. While it might be helpful to comprehend your opponent’s way of thinking, the depravity necessary to get a handle on how a collectivist sociopathic psyche functions could only lead to a dark, confusing place from which reemerging would make a David Lynch movie seem coherent. But there is one thing easily discovered, by even a casual observance, about the people who strictly and gleefully adhere to left-wing dogma: racism is the loadbearing wall of their entire house of cards.

Before we even touch on the racism toward South Carolina Senator Tim Scott from the likes of Jimmy Kimmel and Joy Behar for daring to think for himself, I want to step back and highlight how big the division racket leftists have constructed and, quite frankly, need in order to win political battles.

Did you know that “news” has a race? I bet you didn’t. It didn’t always, it used to just be news – which is simply the recounting of what happened. But now it has a skin color.

A few years ago, NBC News created “NBC Black,” which bills itself as “Elevating America's conversation about black identity, politics, & culture. Telling stories by, for, and about the black community.” They also have “NBC Latino,” which they surprisingly haven’t yet renamed LatinX (likely because they want people to know what the hell they’re talking about, since only mostly white, ultra-leftists use that made up term), which purports to exist to “Elevating the conversation around Latinos in the United States.” And, of course, there is NBC LGBTQ, “NBC Out is the LGBTQ section of @NBCNews . We write and produce content about and of interest to the lesbian, gay, bisexual, transgender and queer community,” and NBC Asian American – “News, features, videos about #AAPI communities.”(There doesn’t appear to be an NBC Native American, which means they hate Native Americans, right?)

Other networks have gotten into the act, Fox has even gotten into the act with “Fox News Latino,” and other race-based “news” websites have come into existence in the last decade or so. Maybe it’s good business, but it’s not good for the country. And it’s what Democrats have always advocated – in 1963, Democrat George Wallace proudly proclaimed the positions of Democrats when he said “Segregation now, segregation tomorrow, segregation forever.” The only thing to change in the ensuing 58 years is their tactic to achieve that, not their goal.

The Grio, The Root, etc., are hotbeds of bigotry masquerading as news, as if the color of one’s skin dictates their world or what they care about. It’s the digital version of the liberal reaction to Senator Scott’s speech – a daily dose of “if your skin looks like this, this is how you’re allowed to think.”

That’s how leftists reacted to a conservative black man rightly telling the country the one thing Democrats are more desperate to hide than anything else – the United States is not a racist country. They lost their minds, that’s not an approved message.

Every stop was pulled out to protect the left’s “precious.” If people don’t see this country as horrible they will not support its destruction and replacement with the false-God Utopia the left is selling. At least not voluntarily.

The usual suspects pounced. Everyone on MSNBC attacked Scott, only stopping short of dropping N-bombs on the air, even though they clearly wanted to.

The story of Scott’s family rising from poverty to Congress isn’t supposed to happen in the America Democrats are selling. There are millions of stories like his, but they don’t get told. Barack Obama’s own story undercuts the liberal narrative, which is why he didn’t use his journey from a child of parents who wanted little (his mother) or nothing (his father) to do with him to the White House was so rarely told, and even more rarely told honestly.

On Scott’s speech, a professor (naturally) from Fordham told an MSNBC audience, “So, that’s where the lack of respect comes from. When he talks about growing up in a one-bedroom house, ask yourself, why did you grow up in a one-bedroom house? Because your party doesn't believe in equality. Ask yourself why your grandfather didn't know how to read? It's because your party actually defunds education. Ask yourself why it is that you went to failing schools? It’s because your party doesn't value education, especially for black youths, especially for people in the south.”

What was left unsaid is after Democrats ended reconstruction after the Civil War, they had control of South Carolina for 100 years. All the issues that professor talked about were created, cultivated, and enforced by the very party she and her fellow panelists has sworn allegiance to.

Everyone in that segment knows this, of course, they were just counting on their audience not. It was a safe bet. No one is taught accurate history anymore, and those on the left who know are as desperate as the liars to keep it hidden for their own advantage; to keep people divided and to keep dividing people further. Divide to conquer. That’s the true face of systemic racism.

The damage to lives be damned, same with the country. Individuals have always been disposable to the left, the last century proved that. Agenda über alles. People, black people in particular, have been misled and manipulated by Democrats as they switch tactics but not their objective since the Civil War. They’re more diverse now, but just as nefarious.