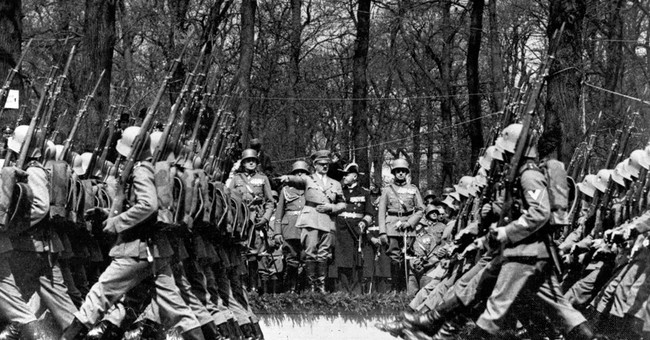 The only way to understand what is happening to America in our time -- and for that matter, in Europe since World War II -- is to understand the left.

And one way to understand the left -- and its enormous appeal to many decent people -- is to understand what it learned from World War II and the Nazi experience. The lessons people draw from history go a long way toward explaining how they view the world and how they behave.

Unfortunately, virtually everything the left learned from the unique evil known as Nazism has been wrong.

The first lesson was that the right is evil, not merely wrong. Because Nazism has been successfully labelled "right-wing," virtually every right-wing position and leader has been either cynically or sincerely characterized by the left as a danger to civilization. That is why the right is so often labelled fascist and compared to Nazis. Vast numbers of people in the West truly believe that if the right prevails, fascism will follow.

Of course, Nazism was not right-wing -- certainly not in American terms. How could it be? Right-wing means less government, not more. Nor was it left-wing, even though "Nazism" was an abbreviation for National Socialism.

Nazism was sui generis. It was radical racism combined with totalitarianism; and racism as a doctrine is neither right nor left.

We have no contemporary movement of any major significance that is Nazi-like. The closest thing we have is Islamist hatred of non-Muslims -- but even that is mostly religion- rather than race-based.

The association of Nazism with right-wing is one reason many Jews loathe the right. In the Jewish psyche, to fight the right is to fight incipient Nazism.

The second lesson the left learned is directly related to the first. If the right is so evil that, if allowed to prevail, Nazism will follow, then surely the left must be beautiful and noble. And that, of course, is how the left sees itself -- as inherently beautiful and noble. After all, how can the opposite of Nazism be anything but noble?

The third erroneous lesson is a deep fear and loathing of nationalism. Since the Nazis committed their crimes in the name of nationalism (race-based nationalism, to be precise), nationalism must be curbed. That explains much of the left's contempt for Americans who wave the flag -- indeed, the left has rendered the term "flag-wavers" a pejorative term.

How else to explain the fact that on American national holidays one finds so many more flags displayed in conservative areas than in liberal ones? The trauma of World War I had already killed nationalism in much of Europe. And World War II did that for the left in America.

The most obvious example of left-wing opposition to American nationalism is its cultivation of "multiculturalism" as a replacement for American national identity. For the left, American citizens are no longer Americans first and foremost; we are African-Americans, Asian-Americans, Hispanic- or Latino-Americans, Native-Americans, etc. The left celebrates what precedes the hyphen far more than the "American" that follows it. As a result, America no longer instills traditional American values and an American identity on either those born here or in its immigrants, which is the reason for the right's concern over illegal immigration, not bigotry and xenophobia.

A fourth lesson the left learned from Nazism has been that no judging of cultures is permissible. Because the Nazis deemed Jews and others as inferior, we are no longer allowed to judge other cultures. In the post-World War II world of the left, all cultures are equal. To say that the contemporary Islamic world, or that black inner city culture, has serious moral problems that these cultures need to address is to be labelled dangerously racist -- again reminiscent, for the left, of the Nazis who declared other groups (inherently) defective. For the left, the only cultures one may judge adversely are white American and religious Jewish and Christian.

Fifth and finally, the left has affirmed pacifism as an ideal. One would think that the most obvious moral and rational lesson to be learned from the Nazi experience is the need to fight evil. After all, if decent nations were not as militarily strong as they were, and were not as prepared as they were to use that might, the Nazis would not have been defeated, and many millions more "non-Aryans" would have been enslaved and murdered. But the left, including, sad to say, Germany, did not draw that lesson. Instead of learning to fight evil, the left has learned that fighting is evil -- and it has taught this to two generations of Americans.

To amend Santayana's famous dictum, it is those who learn the wrong lessons from history who are condemned to repeat it.