The Left Vs. the Redskins 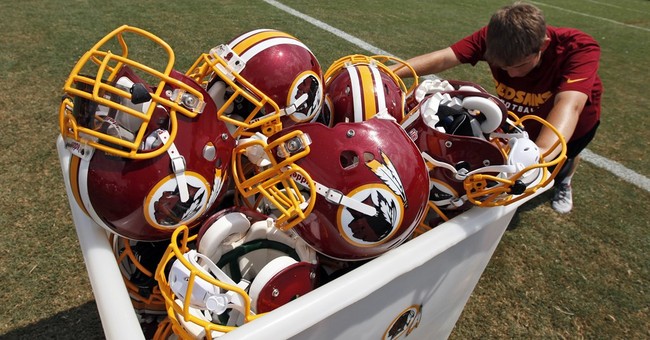 The online magazine Slate announced last week that it will never again refer to the Washington's National Football League team, the Redskins, by its name.


The name, according to Slate, offends American Indians, and therefore should be dropped. And until such time, Slate will never mention it. It will become, in effect, the R-word.

The article, to its credit, acknowledged that the term "redskins" was not coined as a racist epithet:

"The word redskin has a relatively innocent history. As Smithsonian linguist Ives Goddard has shown, European settlers in the 18th century seem to have adopted the term from Native Americans, who used 'red skin' to describe themselves, and it was generally a descriptor, not an insult."

So, then, what's so bad about the name Redskins?

Slate Argument One: "Here's a quick thought experiment: Would any team, naming itself today, choose "Redskins" or adopt the team's Indian-head logo? Of course it wouldn't."

Response: There are many teams with names that wouldn't be adopted today. Who would name a team the "Red Sox," "White Sox," "Packers," "Dodgers," "Forty-Niners," "Steelers," or, for that matter, "Yankees?"

Slate Argument Two: "While the name Redskins is only a bit offensive, it's extremely tacky and dated -- like an old aunt who still talks about 'colored people.' ... "

Response: Since Slate dismisses the term "colored people" as "tacky and dated," why doesn't it call on the National Association for the Advancement of Colored People (the NAACP), to change its name?

Slate Argument Three: "Changing how you talk changes how you think. ... Replacing 'same-sex marriage' with 'marriage equality' helped make gay marriage a universal cause rather than a special pleading."

Response: It's nice to have at least one left-wing source acknowledge how the left changes language to promote its causes. When more and more people began to suspect that global warming was not about to bring an apocalypse, and that, at the very least, it is in a pause mode, the left changed the term to "climate change."

The "marriage equality" substitution for "same-sex marriage" is just one more example of dishonest manipulation of English.

Orwellian manipulation of language by the left would be reason enough to oppose dropping "Redskins," a nearly 80-year-old tradition venerated by millions.

Argument Four is the key argument, offered by the Atlantic, in its support of Slate:

Response: "Whether people 'should' be offended by it or not doesn't matter; the fact that some people (SET ITAL) are (END ITAL) offended by it does."

This is classic modern liberalism. It is why I have dubbed our age "The Age of Feelings."

On a recent broadcast of my radio show, I played excerpts of winning songs from the recent Eurovision Contest. One of them was from Hungary, and after I announced the Hungarian title, I jokingly translated it as "Let's invade Romania."

A man called up, and in unaccented English said he was of Hungarian stock and that I should apologize for offending him and Hungarians generally. I told him that his taking offense at a harmless joke was his problem, not what I said.

Teaching people to take offense is one of the left's black arts. Outside of sex and drugs, the left is pretty much joyless and it kills joy constantly. The war on the "Redskins" name is just the latest example.

Second, it is the left that specializes in offending: labeling the Tea Party racist, public cursing, displaying crucifixes in urine, and regularly calling Republicans evil (Paul Krugman, in his New York Times column last month, wrote that the Republican mindset "takes positive glee in inflicting further suffering on the already miserable." For such people to find the name "Redskins" offensive is a hoot.

The New Republic announced on Thursday that it would follow Slate's lead. And Mother Jones said on Friday it, too, will avoid using this R-word. They join The Washington City Paper, Washington online site DCist.com, the Kansas City Star and football writers at the Buffalo News and the Philadelphia Daily News. If the Redskins have any pride, they should not allow reporters from any of these publications into the Redskins locker room or give them free seats to any Redskins games.

The logo of the National Hockey League team, the Ottawa Senators, features a helmeted male senator of the Roman Empire. In the name of not offending the transgendered and of gender equality, the left will one day find that offensive, too; and demand that the logo feature a helmeted female as well.

That is one of many reasons to fight the left on changing Redskins name. The left never stops.