Controlling When You Relieve Yourself, Not Body Scan, Invades Privacy 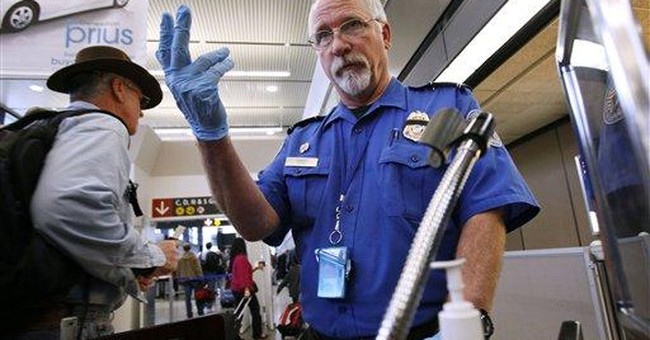 If the government prohibits airline passengers from getting out of their seats during the last hour of a flight, I hereby announce that I will get out of my seat either to escort someone who needs to use the lavatory or because I do. I understand that I may be arrested, but I am willing to make this a cause celebre.

Aside from a genetic incapacity to be directed by irrationality, I will make this protest on behalf of fellow passengers who are in pain because of this idiotic rule. What are diabetics, for example, supposed to do? And considering the fact that "the last hour of a flight" is always more than an hour, often considerably more -- given the frequent delays in approaching airports and given the approximately 15-20 minutes between landing and passengers actually disembarking.

I am not prepared to obey rules that hurt the innocent while doing nothing to prevent terrorism.

When exactly will airline passengers be permitted to relieve themselves? Seatbelt signs are now illuminated -- meaning passengers are not allowed out of their seats -- for at least the half hour it takes to leave the gate and achieve optimum altitude. And on many planes, those signs are (often pointlessly) illuminated for much of the flight after that as well.

Therefore, if passengers are not allowed to get up during the last hour, that would mean that on a two-hour flight, passengers would be fortunate to have a total of 20 minutes when they could stand to stretch, get a book or go to the lavatory.

These useless, dignity-robbing,\ rules could have been averted if available technologies and a more intelligent approach to catching terrorists had been adopted.

One such technology is full-body scanning.

According to Robert Poole, adviser to the White House and Congress on airport security following 9-11, the explosives "which the terrorist concealed in his underwear would have been detected had he been required to pass through one of the 15 millimeter-wave body-scanners now in use at Schiphol (Amsterdam Airport)."

And Charlotte Bryan, a former top TSA and FAA official, told CNN that a body scanner could have stopped Umar Farouk Abdulmutallab, terror suspect on Northwest 253.

The major objection to the scanner comes from the ACLU and from libertarians on "privacy" grounds. This objection led the House of Representatives to ban full body scans. That the ban was led by a Republican, Utah Congressman Jason Chaffetz, who continues to defend his opposition to body scanning, only shows that the left has no monopoly on foolishness.

But it was House Democrats who overwhelmingly voted to ban body scans. Only a fifth of the Democrats in the House voted against the ban while two-thirds of the Republicans voted against it.

The ACLU, which can almost always be depended on to say something foolish and advocate a position that harms society, calls the process "virtual strip search." And Chaffetz declared, "I just think it's too invasive. Nobody needs to see my kids -- I have a son and two daughters -- and see my wife naked in order to secure an airplane!"

It is difficult to say which one is more idiotic. Both illustrate what happens when dogma supersedes common sense.

What privacy are we even talking about? I cherish my privacy, but anyone who actually looks at the scans made by the whole body scanner cannot seriously talk of either privacy or nudity. They are indeed "virtual" images, meaning no skin is shown and the human figure looks metallic.

The ACLU and Rep. Chaffetz have read too many Superman comics -- they imagine the superhero's "X-ray vision." But that is not possible. There is no skin shown. So how can there be "nudity"?

I willingly relinquish whatever "privacy" I lose by being scanned for the even more precious value of staying alive.

Those who think that TSA employees will be leering at naked bodies have a little too much sex on their minds. Same-sex TSA employees will be looking at metallic-like images of thousands of bodies that pass through airport security. Look on the Internet at those images and then tell me that they are "nude." A necrophiliac would be bored.

As a conservative, I am embarrassed by people who put thousands of lives in danger under the guise of protecting their wives and daughters from appearing "naked."

So until my government does something intelligent -- like screening for dangerous people, not dangerous weapons (as Israel so successfully does) -- to protect this frequent flyer, I will not play the pretend game of "do something" that prohibits me from relieving myself on the grounds that terrorists only blow up planes after going to the bathroom during the last hour of a flight.

I will surrender a lot of things to stay alive. But I will not surrender my intelligence. That and being told when to urinate are the real losses of dignity, not a full body scan.