Dobson: “I Would Pull that Lever” for McCain-Palin 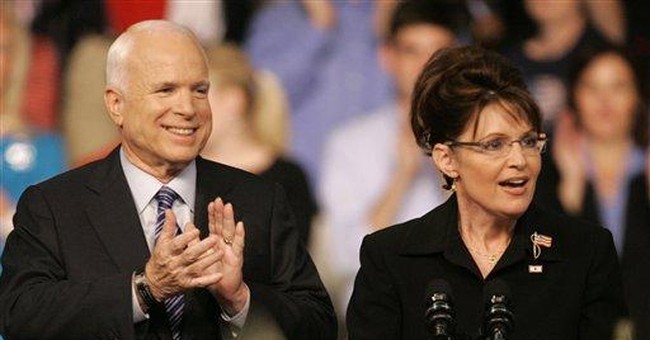 Earlier this year Dr. Jim Dobson, President of Focus on the Family made news when he announced on “The Dennis Prager Show” that he “cannot and will not vote for Senator John McCain.” Today, on The Dennis Prager Show, the conservative leader changed course and announced his enthusiastic support on the heels of the announcement by Senator McCain of Alaska Governor Sarah Palin as his vice presidential running mate.

Dennis Prager: I have a guest here who’s extremely significant in American life, whether you call it American political, certainly American religious life, one of the best known Christians in America— Dr. James Dobson who is president and founder of Focus on the Family…. The last time you were on was a very serious conversation about your feeling at the time that you just couldn’t vote for John McCain, and where do you stand now?

Dr. James Dobson: Well, Dennis, I shared with a colleague just a few minutes ago exactly what you said about the period of time when Ronald Reagan had broken onto the scene and I was in Washington D.C. the day he was inaugurated. That was one of the most exciting days of my life, because everything that we had hoped for and been working for had come to pass. I feel very much that way today. Maybe that’s an overstatement. Maybe time won’t validate it, but this is a very exciting and encouraging day for conservatives and pro-family activists. I am just very, very pleased.

Prager: In light of that, may I infer that when you enter the voting booth—and I am putting you on the spot. I fully acknowledge, and you’re certainly free to say it’s a secret ballot you don’t want to say, but you’re too public to really get away with that, so what’s the story right now?

Dobson: Well, you know I did a radio program about a month ago with Dr. Albert Mohler, and we talked about what was at stake in this election and our concerns about the policies that Barack Obama would implement. The more I hear the more I learn, the more concerned I am, and so on that program Dr. Mohler and I talked about the fact that John McCain is not the perfect candidate. He’s certainly would not be my choice and, for over a year, I did not feel that I could vote for him. But I said in that radio program that “I can’t say it now”—which was then, because I didn’t know who his vice presidential choice would be, and he if would come up with Lieberman or Tom Ridge or somebody like that, we’d be back in a hole again. But I said for the first time “I might, I might.” And some people call that a flip-flop. If they do, so be it. Campaigns are long. You get information. You find out what the choices are. So I’ve been moving in John McCain’s direction. I don’t know if anybody cares, but for me…

Prager: Plenty, plenty of people care and that’s why I am having you on. I care, many people care and you have a lot of followers. You have earned the right to that respect. So are you prepared to say, “Folks, look, given this pick and all I have learned about what would happen with a Democratic victory we have no choice, but to enthusiastically work for the McCain-Palin ticket?”

Dobson: You know, I have only endorsed one presidential candidate in my life and that was George Bush in the second term after I had watched him for four years. I did not do that in his first term. So I’m very reluctant to do that. You marry a politician you can be a widow pretty quickly.

Dobson: But I can tell you that if I had to go into the studio, I mean the voting booth today, I would pull that lever.

Prager: Well this is a very big deal.

Dobson: And that’s a long way’s from where I told you a year ago.

Prager: No kidding. No kidding. I am honored that you used this show to make that statement.

Dobson: You know, Dennis, the things that concern me about John McCain are still there. I made those comments not just based on emotions, but based on his record and some of the things that took place—embryonic stem cell research, and other things, the campaign finance, and other things. Those are still there. So, there’s still concerns. But I tell you, when I look at the choices that are ahead and what the implications are for this country, and now especially with this selection, with just an outstanding V.P. candidate as a running mate, I tell you what I am relieved and very excited.

Prager: Well, if you’re very excited given your previous reservations then I have to believe, and certainly based on the handful of calls I’ve been able to take the first hour before my “Happiness Hour,” I took the calls and people were so excited, palpably excited. Jim Dobson, and I got to tell you… if your base is energized then that is the biggest nightmare that the left has.

Dobson: I was just with about 300, maybe 400 people in a large auditorium, and they put Sarah Palin’s speech on the screen and we sat there and watched. I’m telling you it was electric. These were conservatives, you know. They were mostly Christian, but not all of them were. I mean to tell you, it set that crowd on fire. If that’s any indication, I think we are going to see some things.

Prager: We sure are. Well, you made my day. I just want you to know that.