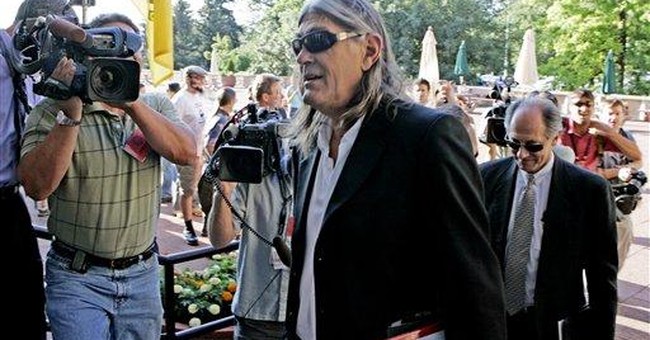 On Sept. 21, 2007, the editorial board of the Colorado State University student newspaper decided to publish a four-word editorial. Apparently finding the traditional mode of expressing ideas -- arguing a case in a few hundred words -- too demanding, they instead wrote four words: "Taser this … F--- Bush." Needless to say, they spelled out the F word.

The "Taser" referred to the police using a stun gun on a student at the University of Florida who refused to relinquish the microphone to other students at a speech at the university given by Sen. John Kerry, D-Mass. (How George Bush is connected to the use of a Taser on a left-wing student interrupting a speech by a left-wing anti-Bush senator was never explained by the editor.)

When universities were governed by people -- either liberals or conservatives -- who valued civilization i.e., before the contemporary left took over the universities, such an "editorial" was inconceivable. It would have been regarded as the work of moral and intellectual idiots whose political philosophy, to the extent that they had any, was anarchism.

But not today. It cannot be stated often enough that our universities generally are run by fools who are breeding a generation of fools. There are, of course, many exceptions, but these exceptions have little impact on the deconstruction of civilization and the breeding of anti-intellectuals taking place at our universities.

The more one knows about what happened at Colorado State University the more this grim assessment of our universities makes sense.

First, the "editorial" itself: It was purely a tantrum, the likes of which we associate with little children. But the editor, David McSwane, is a child; and his editorial board, which unanimously supported the four-word "editorial," is composed of children. Indeed, immaturity is a major feature of college life. For most students, college delays, rather than fosters, the maturing process. Universities, once founded to take young people and help mold them into adults, now work to keep them from becoming adults.

One reason tantrums in place of reasoned arguments are acceptable to the left-wingers at Colorado State (and elsewhere) is the importance the left puts on feelings. If one is really, really angry at President Bush, one should so emote. That's one reason (the other is an acceptance of public cursing) "Buck Fush" bumper stickers are common; why Code Pink anti-war women had a tantrum at the Congressional hearings on the war in Iraq; why the left has substituted feel-good textbooks for objective history books; why the left supports the student self-esteem movement and the abolition of competitive sports that make losers feel bad; among many other examples.

In light of the feelings-based anti-intellectualism that permeates the left, it is surreal that the left routinely accuses those who criticize the low state of our universities as "anti-intellectual." It is so clearly a form of projection. Those of us who lament the state of our universities are protectors of the intellect; it is the feelings-based "F--- Bush"-"Buck Fush" left that is the anti-intellectual part of the political spectrum. That is why Colorado State University, while mildly criticizing the editor -- for using an expletive -- would not remove him, let alone the whole editorial board.

Read this report from CNN, and then weep for our society:

"Speaking for the board that oversees student media, CSU faculty member Jim Landers read a prepared statement and refused to comment further. 'We see the editorial as an opinion which is protected by the First Amendment,' Landers read."

Two sentences that say so much. The misunderstanding of freedom of speech is breathtaking. Retaining or firing the CSU editor had nothing to do with freedom of speech. It had to do with whether someone who abuses the editorial space of a major university newspaper is fit to be its editor. But the left confuses freedom with license (just as it confuses tolerance with acceptance). And so, in the name of protecting freedom, an obscene violation of elementary standards of intellectual coherence and decency went unpunished.

The other illuminating aspect of those two CNN sentences was that professor Landers "refused to comment further." Why? The reason is apparent to anyone familiar with our universities: Liberal professors are unused to being challenged. They are not challenged by other professors, and they hardly are challenged by 19- or 20-year-old students. Professor Landers was not about to open himself to intellectual challenges now.

Likewise, the child-editor himself, "refused to comment," according to CNN. When you retain your job as editor-in-chief of a university newspaper after writing a four-word editorial consisting solely of "'F---' the President of the United States," why would you feel it necessary to explain yourself? Like his mentor, professor Landers, McSwane is aware on some level that he has no intellectual or moral defense for what he did. And like the professor, he feels no obligation to the society-at-large whose mores he so offended.

Finally, let it be noted that the CSU faculty apparently has said next to nothing about the four-word large-font "editorial." Why not? Because, as the Talmud said 1,600 years ago, "Silence is agreement." If questioned, one suspects that nearly all the silent professors of Colorado State University would respond that this was a freedom of speech issue.

Of course, it is not. And that is proved easily: What if an editor had published a four-word large-font editorial that read "F--- Martin Luther King Jr."? Would the professors have kept silent because they deemed the issue one of freedom of speech? Would The New York Times and virtually every other liberal editorial page in America have said nothing about that editorial, as they have said nothing about the "F--- Bush" editorial?

CSU's retaining an editor who wrote four words, including the F word, in a huge font instead of an editorial is one more reason I have come to believe that, with regard to universities, no society has ever paid so much to so many to have its children so alienated from it.

In each case, just as in the disastrous invitation to Ahmadinejad, liberals feel good about their intentions and therefore about their decisions. But few, if any, of those decisions are wise. This is not surprising. A generation whose primary goals have included overthrowing Judeo-Christian values, which once said, "Don't trust anyone older than 30," and which has rejected external moral authority (God, parents, teachers, religion) is not going to be wise. And absence of wisdom is why Columbia University and The New York Times thought inviting Mahmoud Ahmadinejad was a good idea.