Head of Reform Judaism Says Wearing Veil Should Be Respected 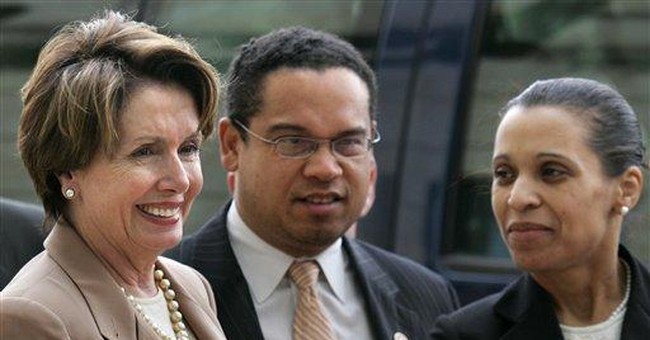 No reader would be faulted for thinking that the title of this column is a spoof. After all, Reform Judaism, like liberal Christian denominations, is exquisitely sensitive to women's equality. Thus, Reform Judaism was the first major Jewish denomination to ordain women, and the first to have its seminaries discourage referring to God as "he."

One would think, then, that the last thing the head of a movement devoted to women's equality would endorse is the covering of women's faces with a veil. This is one of the most dehumanizing and degrading practices that has ever been foisted on women.

That is why it is noteworthy that Rabbi Eric Yoffie, the head of Reform Judaism, in a speech before hundreds of American Muslims at the annual convention of the Islamic Society of North America (ISNA), said: "Why should anyone criticize the voluntary act of a woman who chooses to wear a headscarf or a veil? Surely the choice these women make deserves our respect, not to mention the full protection of the law."

In the long history of women's inequality, it is difficult to name almost anything more anti-woman, dehumanizing and degrading than the veil. We know people by their face. Without seeing a person's face, we feel that we do not know the person. When we read about someone in the news, whether known for good or ill, we immediately study the person's face. One can have one's entire body covered, and it means nothing in terms of whether we feel we know the person. But cover a person's face, and the person might as well be invisible.

Indeed, the veiled woman is intended to be invisible. That is precisely the goal of the veil.

In light of the veil's dehumanization of women, how could anyone, especially a rabbi on the left, say he respects a woman choosing to wear a veil?

The rabbi could offer only two possible responses.

So the rabbi is left with one other explanation: that he used the word "voluntary." But that explanation indicts him as much as does the first explanation. Anyone with even a cursory knowledge of fundamentalist Muslim culture -- whether in the Muslim world or in the West -- knows that, given the social, religious and familial pressures on women to wear a veil, the veil is not worn voluntarily in any meaningful sense of the word.

But while the rabbi respects Muslim women who choose to wear the veil, he had words of contempt for American women who choose to dress like Lindsay Lohan. Like others on the left, Rabbi Yoffie only has standards for Westerners, especially Americans, not for other cultures. It is the left's soft bigotry of low expectations that has often been noted.

In the rabbi's desire to ingratiate himself with his audience, he engaged in the generations-old left-wing practice of moral equivalence. Just as during the Cold War the left regularly equated America and the Soviet Union as "the two superpowers" -- which is why there was universal liberal condemnation of President Ronald Reagan's calling the Soviet Union an "evil empire" -- much of the left today morally equates American fundamentalist Christians with fundamentalist Muslims.

So before a large Muslim audience, Rabbi Yoffie singled out two evangelical Christians, Franklin Graham and Pat Robertson, and a Jew -- me -- as anti-Muslim. He essentially identified us as the Christian and Jewish moral equivalents of Muslims who hate Jews and Christians. That moral equivalence was as immoral as Rabbi Yoffie's defense of the veil.

Now, as it happens, I have never uttered or written a bigoted word against Muslims, and so the rabbi did not actually quote me saying something anti-Muslim. Instead the rabbi distorted what I once wrote. He said, "How did it happen that when a Muslim congressman takes his oath of office while holding the Koran, Dennis Prager suggests that the congressman is more dangerous to America than the terrorists of 9/11?"

Here is what I actually wrote: "When all elected officials take their oaths of office with their hands on the very same book, they all affirm that some unifying value system underlies American civilization. If Keith Ellison is allowed to change that, he will be doing more damage to the unity of America and to the value system that has formed this country than the terrorists of 9/11."

I did not say that Keith Ellison is more dangerous to America than the 9/11 terrorists. I said that Ellison's replacing the Bible with another religious book for the first time in American history is more dangerous to American unity and to American values than the terrorists were. In fact, I feel that way about far more non-Muslim Americans, such as Noam Chomsky, Howard Zinn and Michael Moore. And I repeatedly noted in the same article that the issue had nothing to do with the Koran or Islam, that I would have said this about a congressman replacing the Bible with the Book of Mormon, or with "Dianetics" or any other text. The rabbi slandered me before a national and world Muslim audience.

Slander, morally equating fundamentalist Christians with fundamentalist Muslims, and respecting women who "voluntarily" wear veils: What the left has done to liberal denominations within Christianity and Judaism is a moral and religious tragedy. For example, liberal churches that regard America and Israel as villains have inverted Judeo-Christian morality. But little exemplifies the moral decay of the religious left as does its replacing Judeo-Christian moral standards with multiculturalism and tolerance. It has led to one of its leading clergy announcing that the veil is worthy of respect.