"Buck Fush" and the Left 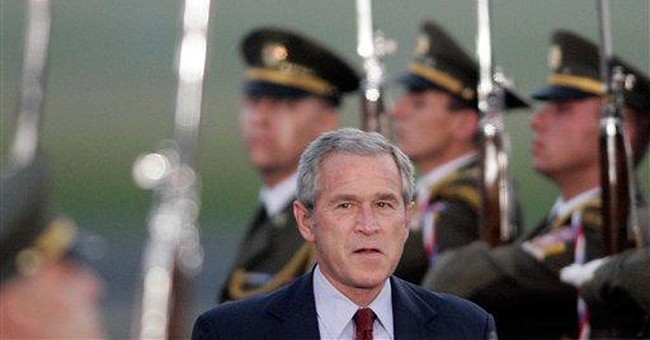 Every day I see at least one car, usually more than one, sporting a bumper sticker that reads, "Buck Fush."

Apparently, some of our fellow Americans on the left find this message to be profound and witty. But it is not these individuals' presence or absence of wit or profundity that interests me here -- both are so obviously absent, no comments are necessary. It's their contempt for society and their narcissism that demand commentary.

Those blessed with common sense know there is a huge difference between public and private use of expletives. While the holiest among us might never utter an obscenity, most decent, even pious, individuals will use an occasional expletive in private under circumstances that can make its use morally, if not religiously, justifiable (as when using an expletive to describe some evil figure or after a heavy weight fell on one's toe).

But higher civilization has always regarded the use of expletives in public (outside of, let us say, theatrical performances) as a form of assault on civilization. That is why as a broadcaster I am prohibited from saying seven selected words on the air. No one monitors my private conversations, but just about everyone, at least until the 1960s, understood that there was something very wrong in saying such words on the radio or putting them on billboards.

That is why we have, as a society, crossed a line when people put expletives on bumper stickers ("S--t Happens," "Buck Fush") or use them in public in distinguished company -- as in newspaper interviews or campaign fund-raisers. Even the individual who puts a "Buck Fush" sticker on his or her car knows that the real "f-word" would constitute an assault on whatever remains of the concept of decency.

So what does the increasing ubiquity of such stickers tell us?

It says a lot about parts of the left. For one thing, it tells us that leftist anger -- make that hatred -- of its opponents is probably the greatest politically inspired hatred in the country. Certainly there were many on the right who hated former President Bill Clinton, and that hatred did at times reflect poorly on the right. But, to the best of my knowledge, no Clinton-hater ever put a "Cuck Flinton" bumper sticker on a car. Why not? Why didn't any conservatives who hated President Clinton do what some leftists who hate President Bush do and use expletives publicly? After all, "Cuck Flinton" is just as witty as "Buck Fush."

The answer is that parts of the left have little or no belief in the concept of "decency" as traditionally understood by Western civilization. They tend to dismiss such notions as bourgeois anachronisms; they place great value on individuals expressing themselves; and they view self-censorship as a form of fascism.

This latter reason is important: The '60s redefined narcissism as idealism. The individual's feelings became sacrosanct.

That is why the self-esteem movement -- the idea that how an individual feels about himself is far more important than what he actually accomplishes -- arose from the left.

And that is why you almost never hear a conservative say "I am offended" when reacting to a liberal speaker or writer, but it is quite commonplace for a liberal to use those words in reacting to someone from the right.

"Make love not war" was another example of placing one's feelings above other values. That is why it is a very good thing for the world that the previous generation, the one that fought Hitler, didn't believe in making love rather than war.

For more than a few people on the cultural left, public cursing is simply a form of self-expression, just as many on the left deemed graffiti to be. Indeed, public cursing may be defined as verbal graffiti, a defacement of the public square. But the people who believe in the sanctity of the public square are far more likely to be on the right. And that is why you will see and hear far more public profanity on the left than on the right.