The Left’s False Claim of Suppression From Voter ID Laws 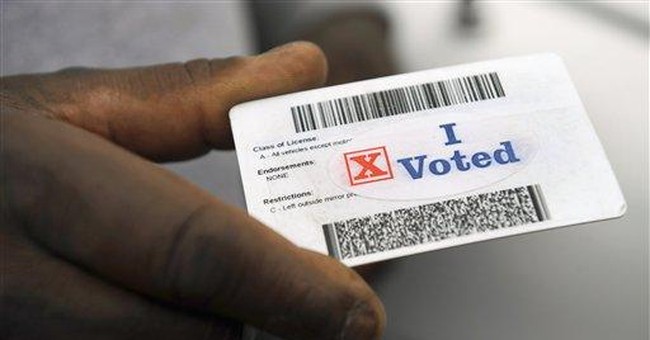 On Monday, Benjamin Jealous, president of the NAACP, decided to confront the issue of Voter ID. Unfortunately, he embraced the left’s absurd ideology that it is voter suppression and an assault on the rights of minorities. He likened the movement of opposition to Voter ID laws to the Civil Right Movements with his reference to “Salem and Montgomery times”.

This rhetoric is nothing but divisive. I’m sure Mr. Jealous invoked this resemblance to create an emotional response to a momentous time in history. What he neglected to inform the oldest civil rights organization in the nation is that voter id prohibits voter fraud, which currently serves as the biggest hindrance to voting, (itself a sacred honor in this country that came via sacrifices and battles). It's time to rebuke the racial oratory that compels people to think that voter id is a race-driven agenda. Efforts to combat voter fraud are not meant to suppress minorities, or any ethnic group for that matter.

What needs to be rejected is the notion that minorities are too simple-minded or naïve to get a government-issued ID. The liberal left claims they are defending minorities, but they are really insulting people's intelligence. They imply that minorities are incapable of completing a small task like obtaining ID. I find it ironic that many liberals claim they are pro-choice when it comes to women making their own decisions about abortion, but then suggest that those same women might not be smart enough to make the right choice about getting an ID, which is needed to do just about anything these days.

Those who labored in the Civil Rights phenomena would be insulted by these partisan attacks. Voter ID is not designed to benefit a Republican or Democrat individual. It is for the American people. It transcends political ideology and demands that a fair election process be made for the general public.

The issue of racism was elevated to an higher level when embattled Attorney General Eric Holder addressed the NAACP. During his speech he compared voter ID to poll taxes. "Many of those without IDs would have to travel great distances to get them, and some would struggle to pay for the documents they might need to obtain them. We call those poll taxes." Ironically, a photo ID was required to attend Holder’s speech. The hypocritical stance of the left is amusing and yet sad to witness because it shows a continuing disconnect from reality.

The Left is turning the push for voter ID laws into a mechanism of class warfare. They are willing to ignore abuse instead of implementing safe and secure checks against fraud. The reason why they continue to sing the known chorus of racial bigotry is because they fear that minorities and seniors will turn a deaf ear to liberal policies and that their influence among these voting groups will diminish.

Liberal opposition to voter ID has nothing to do with concern for minorities. It’s about power and dominion. If the left was so concerned about voter oppression, they would be advocating pro-growth economic policies instead of baseless racial rhetoric that seeks to divide Americans.

The NAACP, Attorney General Eric Holder and any other organization or individual who stands against voter ID laws are making a mockery of our election process. It’s not complicated. You are either an ambassador for fairness and justice in voting or you tolerate corruption for the sake of political power.