Stench and the City: SF's Summer of Urine 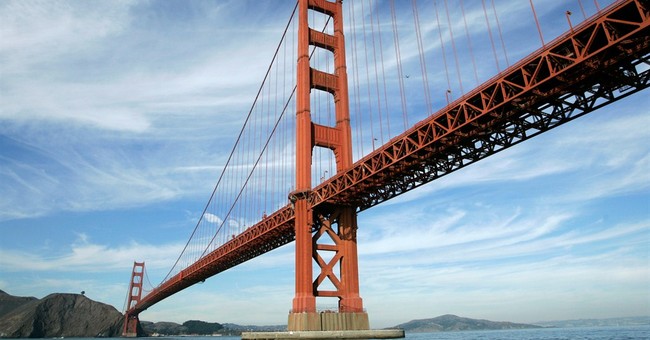 How bad is the urine situation in San Francisco? This is not a joke: Monday night, a light pole corroded by urine collapsed and crashed onto a car, narrowly missing the driver. The smell is worse than I have known since I started working for The Chronicle in 1992. It hits your nose on the BART escalator before you reach Market Street. That sour smell can bake for blocks where street people sleep wrapped in dirty blankets. I talked to Mayor Ed Lee and rode around with police to find out what can be done to clean up San Francisco.

Why does the city stink so? With the drought there has been less rain to wash away the city's sins. Prosperity has produced a building boom -- so there are fewer vacant spaces where the homeless can burrow.

Lee said things I didn't think I'd hear a San Francisco mayor ever say. Like: "I do think that people are being somewhat more irresponsible." (Remember: The first step in solving a problem is to recognize that it exists.) And: "It's not so much the urination," but "historic levels of drug use."

Changes in California law and policy mean that offenses that once rated as felonies are now misdemeanors. Police can't lock up drug users as they once did. Prisons and jails are releasing inmates who, Lee added, haven't worked through their "bad habits."

This year, Hizzoner has ramped up public restroom access. Newly staffed Pit Stop public toilets have decreased requests for sidewalk steam cleaning in the Tenderloin. They've put a pissoir in Dolores Park. The mayor has budgeted more money for Department of Public Works cleanup crews and for housing to improve the lot of 500 homeless families at a time. The new Navigation Center in the Mission has drawn chronic homeless who resisted programs because they refused to part with their pets and possessions. Last year, the board of supervisors adopted a version of Laura's Law that allows authorities to compel the mentally ill to accept outpatient treatment. Still, Lee warned, better bathroom facilities won't necessarily change the habits of street people who "can't even make a rational decision because they're so drugged out."

I saw proof of the street drug problem later that morning as I went for a ride with San Francisco Police Lt. Mike Nevin and Sgt. Joe McCloskey who patrol the homeless beat. We had traveled one whole block when we came across a couple passed out in an alleyway with a small pack of dogs -- one was their dog, two belonged to a friend. The woman said they'd been living at a nearby homeless hotel, but got evicted for failure to pay a week's rent. I saw caps from syringes and small plastic bags used for heroin. A Homeless Outreach Team soon arrived to see what services the couple needed. A Department of Public Works truck came to pick up unattended mattresses, blankets and backpacks.

Later we drove to King Street, to a stretch of unused road turned homeless encampment. Enterprising street people had hooked into electricity -- there were dozens of cords plugged into power strips; someone had tampered with a fire hydrant for water (but now city workers say it has to be fixed before it can be used to put out a fire). There were couches, expensive-looking tents and piles of refuse. I saw a Vespa and at least a dozen bicycles. Spying a cache of bike frames, McCloskey suspects a chop shop. Another officer opines, "If you are a drug addict, you are going to come to San Francisco."

Across an overpass, I see new condos -- a two-bedroom unit is for sale for $1.5 million. As the city gets smellier and scarier, I wonder, how many suckers can one city find to pay that kind of money in a neighborhood so clearly on the edge?

By now, most of the two-dozen or so King Street squatters have taken off. Two remaining, still packing up stuff, tell me they have spent a month there. A man named Brian from New Orleans says he came to San Francisco four years ago. He spent three days on King Street. "I love the city." Of course, he does.

"All we are really is a nuisance to them," McCloskey says. Later he tells me, he's great at clearing blocks, but that only moves the homeless to a different place.

I have just finished reading a June 2015 U.C. Berkeley Law School Clinic report, "Punishing the Poorest: How the Criminalization of Homelessness Perpetuates Poverty in San Francisco." The authors maintain that San Francisco "is responding to homelessness with a punitive fist." Punitive? As in tough? The report cites laws against overnight camping and lying on public sidewalks, as well as drug possession or alcohol consumption in public places. Such laws are Jim Crow 2015, according to the report; the term "quality of life" is an "offensive misnomer" that works against "poor people, people of color, and homeless people who are disproportionately impacted by these laws." In short, if street people are self-destructive and anti-social, it's because of the police.

I have to laugh because Lt. Nevin sounds like a social worker. He makes a lot of the same points as the Berkeley report. You can't expect drug addicts to get clean without providing housing first, he says. And: "It doesn't do any good to cite somebody and then run into them a week later and cite them again." He wants more resources, like the Navigation Center, which take the time needed to steer the chronic homeless into the right programs.

There's one point in the U.C. Berkeley report that does strike a chord -- the argument that many SFPD actions just don't work. Move a homeless man, and he just goes elsewhere, not into housing. The cycle of citations doesn't work because street people don't pay fines. Take away someone's driver license for not paying fines and he or she can't get to work. Arresting drug users is futile, I gather, because misdemeanors mean little more than a short stint in jail -- hours maybe. Report ethnographer Chris Herring interviewed homeless people who told him arrests were turnaround events that resulted in, maybe, a night in jail, if that. At most, a weekend.

"I do find it cruel to say it's unacceptable to camp in San Francisco," Herring told me over the phone. On principle, I have no problem with police citing street people for squatting on and trashing public spaces. That's vandalism. But if citations don't work, that bothers me. Maybe there are things SFPD should be doing less, because they don't work. Or things they should do more to improve -- I'll say it -- San Francisco's "quality of life." If you think "quality of life" is a slur, you're part of the problem.

San Francisco is an affluent and vibrant city. It shouldn't smell like stale piss.