How to Win the Assisted-Suicide Debate 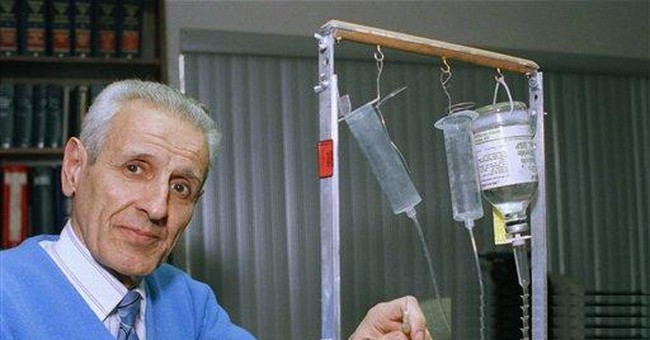 "If you're a politician who has ever voted against doctor-assisted suicide, or you would vote against it in the future, I hate your f------ guts and I would like you to die a long, horrible death. I would be happy to kill you personally and watch you bleed out. I won't do that, because I fear the consequences," Adams blogged Saturday as his 86-year-old father approached "possibly months" of "living Hell" ending in a bad death.

And: "I'm okay with any citizen who opposes doctor-assisted suicide on moral or practical grounds. But if you have acted on that thought, such as basing a vote on it, I would like you to die a slow, horrible death too."

Adams later added that his father died a few hours after the post. In his rage, perhaps, he turned to intimidation over the more arduous task of convincing people with different beliefs.

When Adams returned my call, he told me that he probably doesn't want me to die. Oh, but you do, I responded. I've written against assisted suicide. "I would put you in that category," he conceded. "You are part of the problem."

Victoria Kennedy wrote that a 2012 Massachusetts ballot measure to legalize assisted suicide was bad policy because it was "harsh and extreme." I ask: Would the world be better off without her, too?

"Yes, I think she's part of the bad guys," Adams reluctantly replied. Opponents of assisted suicide are responsible for the "torture" of his father.

"If my dad were a cat, we would have put him to sleep long ago," Adams wrote. That's the America-treats-pets-better-than-people argument for euthanasia. Yes, families put down cherished pets after much anguish, but also, according to The Humane Society of the United States, shelters put down 2.7 million adoptable dogs and cats every year.

Adams rejected my analogy about his analogy. He sees an enlightened system in which doctors put down the parents of doting adult children -- only at the last minute. It works well elsewhere, he added.

The Dutch legalized physician-assisted suicide in 2002; last year, euthanasia accounted for 3 percent of Dutch deaths. There was a 13 percent bump after mobile units could be dispatched to homes where family physicians refused to kill patients. So much for safeguards -- like the patient's own doctor's having to approve. Advocates use safeguards to argue that a practice will not be abused; then they whittle away at them.

I believe in safeguards, too: liberal pain control and directives that allow sick people to stipulate which procedures they do not want. Love.

I told Adams I fear that if we legalize assisted suicide, overworked providers will eliminate inconvenient people, just as shelters dispatch unwanted cats. He knows it could happen. He argued that "good things" -- hospitals and police -- come with risks.

Me, I don't want to live in a world where one group of people decides when another group should die. For that, Adams wants me to die a horrible death. Once death becomes the solution for one condition, it becomes a remedy for others.