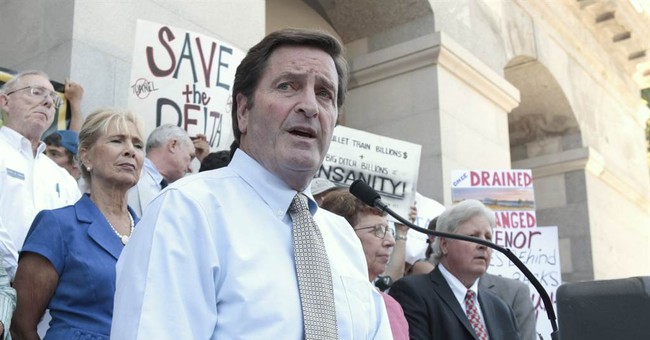 House Minority Leader Nancy Pelosi told "Meet the Press" on Sunday, "Democrats stand tall in support of the Affordable Care Act." Not in her backyard -- in the nearby delta counties, some Dems are trying to distance themselves from Obamacare.

The most startling deserter is Garamendi, a former state insurance commissioner who voted for Obamacare amid much fanfare as a freshman congressman in 2010.

In a statement, Garamendi said he supported the Upton bill because every law "can be improved." While the Upton bill "has flaws," he hoped its passage in the House could lead to a good compromise bill.

Garamendi is right about the flaws. Upton's bill might provide relief to some consumers who face higher premiums when their plans run out in 2014, but only if insurers want to sell old plans. ACA supporters reject it because it would undermine Obamacare's everyone-in-the-pool mandate.

As happened with Bera and McNerney, Garamendi's staff declined my offer to talk about it. But his former aide, Democratic graybeard Darry Sragow, told me he assumes all three voted for the Upton bill because "it was the right thing to do." If you represent a district viewed as competitive, Sragow added, "you want to make sure that you acknowledge the problems that have been encountered in rolling out Obamacare."

Problems? One million Californians will see their private plans canceled; many face steep premium increases as well as the loss of their doctors. Pelosi counters that those old policies were substandard. Maybe Pelosi can tell her San Francisco constituents they should say good riddance to their old health plans, but such talk won't fly in Solano County, Calif.

Republicans have been sending around a 2010 press release in which, like Obama, Garamendi boasted that the Affordable Care Act means "that never again will your insurance run out or be taken away from you when you need it the most."

"He is more culpable than most Congress members because he was the insurance commissioner," argued GOP Assemblyman Dan Logue, who is challenging Garamendi next year. He "should have been well aware" of the litany of woes Obamacare would unleash.

Bera is a doctor. In a statement, the freshman vowed to "keep working to fix parts of the Affordable Care Act that aren't working." Three Republicans are vying in the Seventh District primary. GOP guru Rob Stutzman sees Bera as highly vulnerable.

McNerney has the least to fear next year. National Republican Congressional Committee press secretary Alleigh Marre tells me the NRCC is "still recruiting" a challenger. Yet McNerney seems the most miffed of the Delta Three.

In his statement, McNerney chided Obama for not keeping his pledge that if Americans liked their plans, they could keep them. Rather than trashing the old plans a la Pelosi, the former engineer sided with constituents who face premiums "as much as four times" their current charge for comparable coverage.

"It's more or less an admission of fear and vulnerability," said Stutzman, "that they have to buck Pelosi that strongly and rebuke the very law that they've enthusiastically supported." You might say they were for it before they were against it.