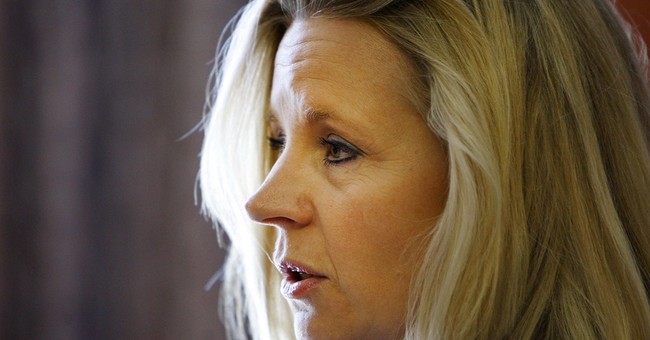 Trending
Liz Cheney, political pundit and daughter of a former vice president, might have trouble unseating three-term GOP Sen. Mike Enzi in the Wyoming primary next year. On vacation in Casper last week, I had dinner at Bosco's, where owner Susan Bosco proudly displays signed photos of local political luminaries -- including Enzi, Sen. John Barrasso, Gov. Matt Mead and Dick Cheney himself, Republicans all -- but there was no head shot of Liz Cheney.

Every town has a restaurant like Bosco's, GOP strategist Liz Brimmer noted, and "it's not just about a face on the wall." Enzi has won re-election with more than 70 percent of the vote twice because he truly represents Wyoming. As for Cheney's aspirations to represent Wyoming, said Brimmer, "this is all so recent."

Cheney has had a rough ride since moving from Virginia to the Equality State last year. In August, the Casper Star-Tribune reported that Cheney improperly received a state resident fishing license. (She had lived in the state for 72 days, not the 365 consecutive days required by law.) Worse, her application wrongly claimed the she had lived in Wyoming for a decade.

"That's the kind of thing that really makes people mad," observed C.J. Box, author of a mystery series that features a Wyoming game warden/sleuth. "That's kind of sacrosanct in Wyoming."

"You can't just make that error."

When Angus M. Thuermer Jr. of the Jackson Hole Daily reported that Cheney had to file a $220 bond for filing a false statement, blogger Jim Romenesko reported, Cheney told a tea party gathering that the paper's staff suffered from liberal bias and "newspapers are dying, and that's not a bad thing." Strike 2.

Cheney had to walk back that quote with a Facebook posting that praised Wyoming's "hardworking objective journalists." To Box, it was a rookie Wyomingite mistake.

Her campaign rejects any notion that Cheney is new to the state. She's a fourth-generation Wyomingite, spokeswoman Celeste Colgan maintained in a statement, who split her time between Washington and Wyoming since her father was elected to Congress in 1978. The campaign positions Cheney, 47, as the "true conservative" in the race, "with the experience, values and roots" to represent Wyoming well.

I would add that Enzi, 69, doesn't own his seat for life. Others have every right to challenge him, including in the Republican primary.

But when the challenger hasn't been a full-time Wyoming resident since childhood and she owes her high profile and ability to raise campaign cash largely to her father, locals might want to remind the Cheneys: Wyoming is an oil-and-gas state, not nepotistic MSNBC.

"Money raising has always been a problem for me," Enzi told The New York Times in July as Cheney was about to throw her cowboy hat into the ring. At the time, Enzi's campaign had a quaint $488,000 in the bank.

Cheney can raise beaucoup bucks and turn the Wyoming primary into an ugly, big-money slugfest. In this red state, whoever wins the Republican primary wins the general election. The only way Cheney wins is by turning voters against Enzi.

"I would be surprised if it went all the way to the primary," said Box, secure in the belief that his neighbors don't want an ugly primary. "That might make people more angry."