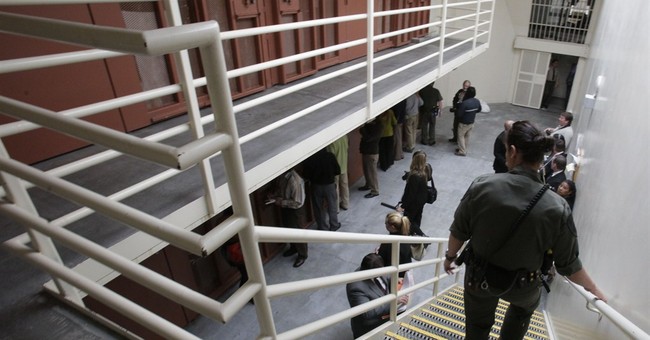 Here's how you know the California prison inmate hunger strike is a stunt, if a dangerous stunt: The strike to protest security housing units in California prisons began with 30,000 participants; Jay Leno, Susan Sarandon and other celebrities signed a letter that denounced the SHU as "solitary confinement" and "torture." As of Thursday, the count was down to 79 inmates, including 44 who had fasted continuously.

Days after U.S. District Judge Thelton Henderson signed an order authorizing prison doctors to force-feed inmates, the Prisoner Hunger Strike Solidarity coalition announced that more than 50 additional inmates in Pelican Bay's SHU "are now going back on hunger strike." Hmm. Do you think there will be more strikers because they know they can't starve?

Need another hint that inmates aren't serious about starving? Some prison lawyers aren't even fighting the force-feeding order.

Prison Law Office attorney Donald Specter has successfully sued the state prison system repeatedly. He co-signed Henderson's order. Specter explained that the order does not necessarily mean patients will be force-fed. Just that it can happen.

Inmate attorney Jules Lobel railed that force-feeding hunger strikers "violates international law," yet he told The Guardian, a British newspaper, he would not seek to overturn Henderson's order.

Another hint: The judge in this case has issued numerous rulings that have tied the hands of California prison and law enforcement officials. He was on the three-judge panel that in 2009 ordered California to release 40,000 out of 150,000 inmates.

So when Henderson allows force-feeding "in view of the risk that inmates may be or have been coerced into participating in the hunger strike," you know it's not a trumped-up notion. His order not only acknowledged the risk that prison (read: gang) leaders threaten other inmates to go without food but also invalidated do-not-resuscitate orders made at the onset of the hunger strike. The judge clearly is concerned that some inmates also may have been coerced into signing DNRs.

Joyce Hayhoe of California Correctional Health Care Services told me of a Corcoran SHU inmate who would accept food only if he could hide it. Hayhoe met SHU strikers who believe in the cause but also a prisoner who would submit to feeding only after officials agreed to transfer him. In July, the California Department of Corrections and Rehabilitation reported that a hunger-striking inmate assaulted his cellmate who refused to share food. Still, the solidarity caucus refers to the food strike as "nonviolent protest."

"Hunger strikes are a long known form of nonviolent protest aimed at bringing attention to a cause, rather than an attempt of suicide," Sen. Dianne Feinstein, D-Calif., wrote in a nod to the theatrics involved. She was writing about Guantanamo Bay, where the military force-feeds conscious hunger strikers.

The California prison system is handling this hunger strike differently. Though Henderson's order allows doctors to force-feed inmates, Hayhoe told me the state will do so only when professionals deem a patient incapable of making a rational decision. Then doctors may "step in and save someone's life."

Hayhoe knows of no permanent organ damage yet. Personnel have been giving hunger strikers Gatorade, as well as vitamins to safeguard their eyesight. Officers make daily rounds to see who needs medical attention. A "hunger strike patient fact sheet" explains how fasting can kill -- which probably accounts for the 99 percent defection rate.

The four leaders of this hunger strike aren't your standard human rights activists. All four have been convicted of murder. The feds named one as an "unindicted co-conspirator" in an indictment targeting the Mexican Mafia prison gang. Another killed a fellow inmate and member of the Aryan Brotherhood.

In a statement, Dolores Canales of Prisoner Hunger Strike Solidarity huffed that the Henderson order is about "dehumanizing the strikers, delegitimizing their demands, and disrupting the widespread support for the protest coming from the community." Widespread support? In the taxpaying community, there is indeed widespread, if wrongheaded, support for letting inmates starve.

The useful-idiot prison groupie crowd is willing to go there, too.