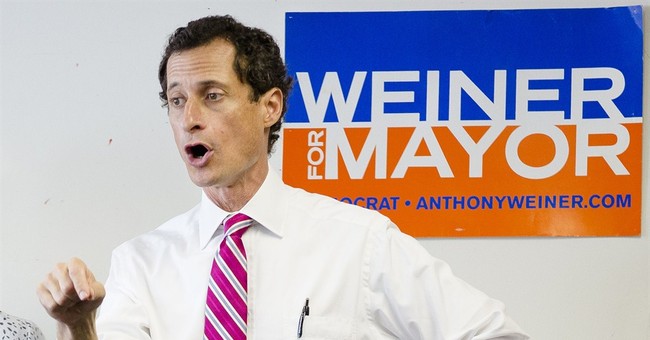 Everyone has a theory as to why former congressman and not-so-former tweeter Anthony Weiner is running for New York mayor. My new take is: Weiner really is running to be a co-host on CNN's "Crossfire," which will return to cable TV next month after an eight-year hiatus.


After all, Newt Gingrich will be one of the show's two conservative hosts. This is after he ran and lost the 2012 GOP presidential primary by taking on the news media, most notably CNN's John King. When King moderated a January 2012 debate in South Carolina, he opened by asking Gingrich about an ABC report that the Newter's second wife, Marianne, claimed Gingrich had asked her to agree to an open marriage in 1999.

Gingrich cheated on his second wife with his now third wife; nonetheless, the former speaker of the House was in high dudgeon at the very suggestion that he would propose an open marriage. "I think the destructive, vicious, negative nature of much of the news media makes it harder to govern this country, harder to attract decent people to run for public office," he railed.

And: "I am frankly astounded that CNN would take trash like that and use it to open a presidential debate."

Now Gingrich is working for CNN. And I am frankly astounded that CNN would take a huckster like him and use him to open "Son of Crossfire."

In 2008, Gingrich sat on a love seat with Nancy Pelosi for an ad that urged Washington to "take action against climate change." Two years later, when it served his presidential aspirations, Gingrich was railing against carbon taxes and talking up the benefits of cheap gasoline. He will say anything.

Likewise, liberal co-host Stephanie Cutter, the former Barack Obama spokeswoman who claimed to have no knowledge of a negative ad campaign -- even though she had set up a conference call with the ad's star, a disgruntled former employee of Mitt Romney's -- will say anything.

"Crossfire" lasted on television for 23 years because it featured hard-charging hosts with real chops -- Pat Buchanan and Michael Kinsley, Bob Novak and Bill Press -- and core convictions. The new version's other two hosts -- S.E. Cupp on the right and Van Jones on the left -- could well fill those shoes.

For their part, Gingrich and Cutter represent the very qualities that helped lead to the 2005 cancellation of "Crossfire." Months earlier, comedian Jon Stewart appeared on the show with co-hosts Tucker Carlson and Paul Begala. To my mind, Carlson and Begala were credible hosts, but Stewart drew blood when he faulted the show for "hurting America" with its "partisan hackery."

When CNN canceled the show in 2005, its then president, Jonathan Klein, told The New York Times that Stewart's criticism was a factor. CNN wanted to move away from "head-butting debate shows."

These days, the problem with cable debate isn't the head-butting so much as the feel that this is showbiz head-butting.

The problem with political discourse these days isn't that it's too adversarial; it's that it isn't adversarial at all. It's just show business.