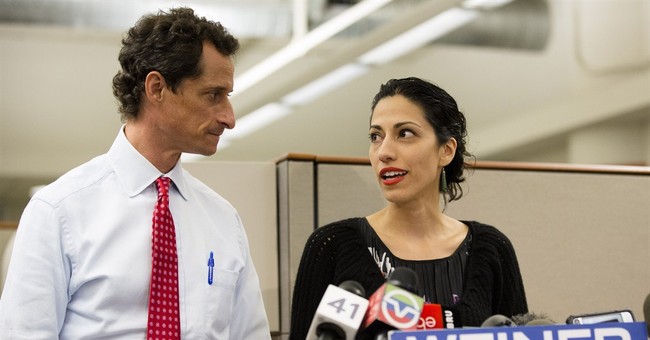 Trending
Huma Abedin has graduated from sympathetic victim to pathetic enabler. I felt bad for Abedin in 2011 when, as a newly married and pregnant wife, her congressman husband, Anthony Weiner, embroiled her in his sexting scandal. With a baby on the way, she chose to stick with the marriage -- a decision others must respect.

Weiner, of course, is the selfish cur who ran for New York mayor fully knowing that the decision would drag his wife and son through more muck. It was inevitable that one of his sexting friends would air his dirty lingo, plaster his cheesy pickup lines all over the Internet and, worse, release more photos. With more pixels.

Those pictures tell a thousand words. Starting with: no self-control, no character, no brains.

Then there's the portrait of the wronged wife standing by her no-good spouse in front of a packed news conference. "Anthony's made some horrible mistakes, both before he resigned from Congress and after," Abedin told reporters, "but I do very strongly believe that that is between us and our marriage."

Like the patricidal orphan, the New York power couple actually suggested that the media not make too big an issue of Weiner's selfies -- because he's married.

Now, if Abedin wanted to stay with Weiner because their marriage is sacrosanct, that's her private business. But she had no business pushing his candidacy for public office, under the fiction that he has his demons under control and voters can trust him, because they can trust her.

The latest Quinnipiac poll, mostly taken before Tuesday's news conference, shows Weiner ahead of City Council President Christine Quinn and the rest of the Democratic pack. Never underestimate the benefits of name identification and the public's desire to give fallen politicians a second chance.

On the campaign trail, The New York Times reported, Weiner liked to talk about the "arc of the hero" as he weaved his tale of woe with stories about Nelson Mandela and Franklin D. Roosevelt. Somehow, after Weiner emerged from a period of painful introspection, this congressman known mainly for his ability to self-promote emerged thinking he is in the league of men who did big things.

May his arc turn into a fast dive.

I cannot believe that New Yorkers would elect a mayor whom staffers cannot trust alone with a smartphone. And fuggedabout the spate of sexual harassment lawsuits on the horizon that name the city and Weiner's nom de plume of "Carlos Danger."

Abedin's longtime boss, Hillary Clinton, won a U.S. Senate seat for New York after her extraordinary service as a long-suffering wife. So now there are murmurs that Abedin should run for mayor.

Forget those lugs who have been going to boring meetings, balancing budgets and setting policy when they could have been tweeting. Bigfoot blogger Nate Silver tweeted before the news conference, "Huma should have run for mayor; she'd win in a landslide."

No, public office is not a consolation prize for women with rotten taste in husbands. It is a public trust.