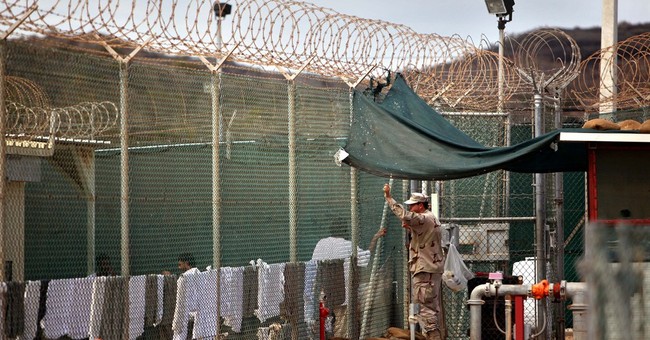 Trending
Hunger strikes aren't really hunger strikes anymore. "Hunger strikes are a long known form of non-violent protest aimed at bringing attention to a cause, rather than an attempt of suicide," Sen. Dianne Feinstein, D-Calif., explained in a letter to Secretary of Defense Chuck Hagel. Feinstein wants the military to curb the force-feeding of hunger-striking detainees at Guantanamo Bay. Force-feeding -- to keep detainees alive -- is the new waterboarding.

According to the Department of Defense, 80 of the prison's 166 detainees are participating in a hunger strike to protest their indefinite detention; 46 are being force-fed with gastric tubes inserted through the nose.

This is what I don't understand: If modern hunger strikes are designed to generate publicity and not to starve the participants, then why does Feinstein protest when the military keeps the prisoners alive?

The so-called human rights lobby argues that force-feeding hunger strikers is a violation of human rights. U.S. District Judge Gladys Kessler agrees. She recently denied detainee Jihad Dhiab's petition to stop the practice on the grounds that the court lacked jurisdiction, even as she asserted that "force-feeding is a painful, humiliating and degrading process."

Likewise, American Medical Association President Jeremy A. Lazarus, in an ethics paper, calls force-feeding "an inhumane and degrading intervention that falls within the prohibition of torture."

He wrote, "Every competent patient has the right to refuse medical intervention, including life-sustaining interventions." Yet in a June paper, he noted that some hunger strikers "may make less-than-voluntary decisions, feeling pressured by circumstance or other detainees." Others may be counting on medics to intervene.

So the doctors group, which won't let doctors participate in executions -- in keeping with the dictum, "First, do no harm" -- is telling doctors not to force-feed detainees who may want them to.

On Tuesday, U.S. District Judge Rosemary Collyer denied a similar petition on jurisdictional grounds but came down opposite Kessler on the force-feeding issue. "Under the Eighth Amendment," Collyer wrote, "inmates have a right to adequate food, clothing, shelter and medical care." The military is responsible for detainees' safety.

Department of Defense spokesman Lt. Col. Todd Breasseale told me that a growing number of hunger strikers are choosing liquid supplements over a nose hose. "For reasons that are unclear to us," he added, some choose what their lawyers call torture.

In essence, the human rights lobby has manufactured a human rights abuse -- call it nutritional waterboarding -- where detainees are compelling medical personnel to force-feed them. Or else.

"I've always been puzzled by the emotional atmospherics of hunger strikes, in which people are using other people's morality as a weapon against them," Walter Olson of the blog "Overlawyered" told me. "If the captors were as ruthless and demonic as Islamist ideology would hold, they wouldn't actually care about what is happening to a starving prisoner."