Obama Is No Fool on Syria 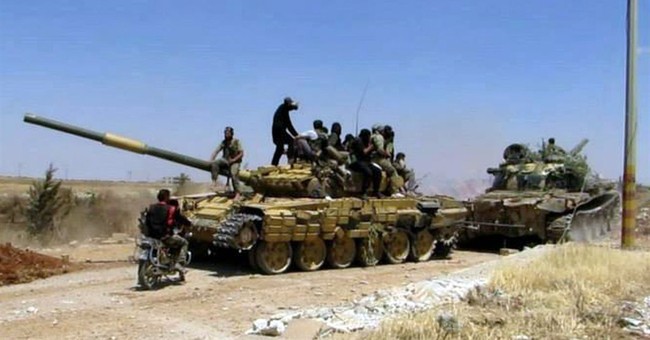 Last week, Bill Clinton warned that President Barack Obama risked looking like a "wuss" and "a total fool" for not acting sooner on Syria. Shortly thereafter -- but two months after Secretary of Defense Chuck Hagel charged that strongman Bashar Assad had crossed a "red line" in using chemical weapons against his own people -- the White House announced that in response to Assad's use of sarin, the administration would send small arms to help Syrian rebels.

Allow me to stand up for the president. Obama didn't look like a fool for not rushing into the Syrian mess at the behest of Beltway foreign policy do-gooders. To the contrary, Obama has shown himself to be the rare Washington leader who learned something from Egypt and Libya. No need to touch that stove too often.

In 2011, during the heady days of mass protests in Cairo's Tahrir Square, Secretary of State Hillary Clinton came forward to urge Egyptian President Hosni Mubarak -- a U.S. ally -- "to begin immediately serious negotiations on a peaceful and orderly transition." Now Her Stateness looks totally foolish. Because she had Arab Spring fever, an ally is in chains, and Egypt has new leadership, the Muslim Brotherhood.

At least America had a national interest in ousting Libyan despot Moammar Gadhafi, who ordered the 1988 Pan Am Flight 103 bombing, which left 270 dead. But with the U.S. military spread thin from wars in Iraq and Afghanistan and the po][litical ideology of Libyan rebels in question, Obama preferred to leave NATO in charge of the air war over Libya. A White House aide famously dubbed this strategy "leading from behind."

Sen. John McCain, R-Ariz., has faulted Obama for pledging arms after 100-plus Syrians were killed by chemical weapons but not earlier in a civil war that has claimed 93,000 lives. Give this to McCain: He has the moral high ground. I felt the same way about the atrocities committed by Iraq's Saddam Hussein. Ten years after the Iraq War began, the country is more stable but at a cost so terrible that Americans don't want to walk that path again.

The Obama administration wisely stipulates that there will be no American boots on Syrian ground. Deputy national security adviser Ben Rhodes asserted that Washington expects U.S. arms will not fall "into the hands of extremists."

The president also has resisted calls to order a "no-fly zone." He would rather spend tax dollars on nation building at home than on civil war management abroad.

There's this view among the foreign policy elite that Obama has to be tough on Syria in order to telegraph to world leaders that American outrage builds at a penalty. In Egypt, the penalty was that a terrorist organization won power, and in Libya, the penalty put more firepower into the hands of hostile militias.

By all means, Mr. President, send arms to the Syrian rebels. Do what you have to do to keep Assad -- and Hezbollah and Iran and Russia -- from winning. But don't feel you have to give in to the risky demands of the foreign policy scolds. Remember: "We came; we saw; he died."