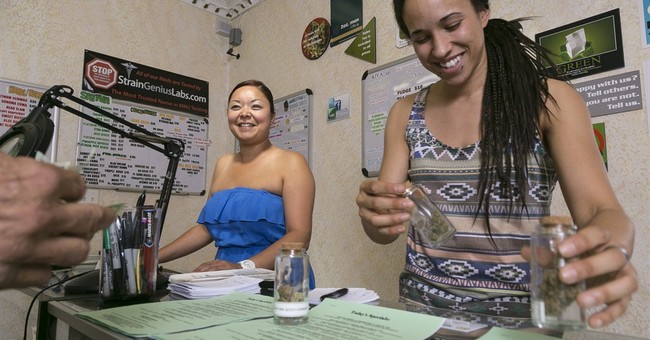 Trending
California Lt. Gov. Gavin Newsom likes to be out front on issues. As San Francisco mayor, he approved same-sex marriages in City Hall even though they weren't legal. He pushed for a first-of-its-kind ban on city pharmacies selling cigarettes. Likewise, he signed the Special City's first-in-the-nation ban on groceries giving away plastic bags.

Newsom has hailed California's role as the first state to legalize medical marijuana. So imagine how it must have broken his heart when Colorado and Washington voters approved measures to legalize recreational marijuana in November. Now the best California can hope for is third place.

And he has only himself to blame. In 2010, Newsom did not support Proposition 19, the ballot measure that would have legalized marijuana under state (not federal) law.

"This is a hard one for me," Newsom told The San Francisco Appeal at the time, but "I'm just not there yet." He reiterated his support for medical marijuana but voiced concerns about the logistics of full-on legalization and the message it would send.

But then Newsom has -- what's the word politicians use when they finally say what they thought all along? -- evolved.

Newsom's name popped up Monday in a New York Times column by Bill Keller, under the headline "Hot to Legalize Pot." Keller reported that Newsom is "part of a group discussing how to impose more order on California's medical marijuana market, with an eye to offering broader legalization in 2016."

On HBO's "Real Time with Bill Maher" recently, Newsom explained his evolved position. "All these years, I've been sort of dancing around this" by endorsing medical marijuana, he said. "Finally, someone asked me directly ... and I said what I think. And the right thing to do is to tax and regulate it because the unintended consequence of this war on drugs is self-evident abject failure." Then Newsom called for other politicians to exhibit more courage on the issue. Really.

The someone who asked, by the way, was New York Times reporter Adam Nagourney, who questioned Newsom after the Colorado and Washington votes.

Why the change? Newsom has a well-known hunger for headlines. And Nagourney does work for -- all bow -- The New York Times.

Last year, Newsom came to the humble San Francisco Chronicle to announce to the editorial board that he supported allowing gubernatorial nominees to choose their running mates. Gov. Jerry Brown didn't pick his lieutenant governor; Newsom none-too-wisely complained, "We're at each other's throats."

His new leaf on marijuana could be politically brilliant. As Tom Angell, founder of Marijuana Majority, noted, "he's a smart politician." Newsom wants to get out front on the issue. "He knows that it's not a political third rail. It's a political benefit."

In February, The Field Poll reported that 54 percent of Californians support legalizing and taxing marijuana.

In 2010, Newsom was part of the Democratic pack. None of today's statewide officeholders -- not Dao Guv, not great-looking Attorney General Kamala Harris, not Sen. Barbara Boxer -- supported Proposition 19. All three, however, stressed their support for medical marijuana.

For the record, I voted for Proposition 19. I agree with what Newsom now will say publicly: Marijuana prohibition is a failed policy.

With 2014 and 2016 on the horizon, Newsom is California's first statewide officeholder to advocate legalizing marijuana. Bet he won't be the last.