Make Sure It's Not a Bay Bridge of Cards 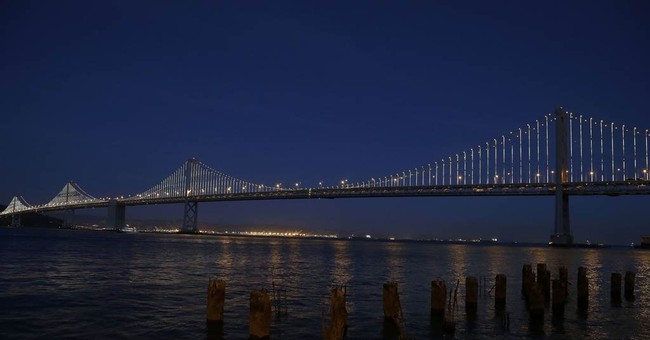 After the 1989 Loma Prieta earthquake shook loose a big chunk of the Bay Bridge, local politicians did not signal that they wanted to take decades to build a new eastern span, so commuters should get used to driving on a span expected to crumble in a big rumble. Instead, they made grandiose promises about a "world-class" structure. Then-Oakland Mayor Jerry Brown demanded a tony design; then-San Francisco Mayor Willie Brown stood up for Treasure Island interests. Steel prices soared.

Now, $6.4 billion later, the Mayors Brown have gotten what they wanted -- a so-called world-class design erected in glacial time. But is it safe?

In March, when workers tightened 96 anchor rods, 32 cracked. As the San Francisco Chronicle's intrepid Jaxon Van Derbeken reported, experts suspect hydrogen -- which is found in water -- got into the rods and made them brittle.

Were the rods, which were manufactured in 2008, defective, or were they used in a way that made them go bad? Or both? Is a batch of similar 2010 bolts also problematic? Was the design flawed from the start? Over time, one can hope, experts will answer those questions.

Meanwhile, the question on everyone else's mind: Can we trust the agencies that oversaw the cracked-rod construction to admit that their $6.4 billion world-class wonder isn't safe?

Yes, we can, says Steve Heminger, executive director of the Metropolitan Transportation Commission, which organized the Bay Bridge Task Force. Heminger assured me he's not going to allow the bridge to open -- just to make Caltrans look good -- if it's not safe. And he's more than willing to blame Caltrans.

Problem: Heminger told me he didn't know there was a problem until March. His experts didn't know, either.

You can trust Business, Transportation and Housing Secretary Brian Kelly, Heminger said, because the state ordered the rods in 2003 and 2004 -- long before Kelly showed up. Quoth Kelly: "I'm not afraid to say that a decision made 10 years ago on supply was wrong."

Problem: Kelly also talked up the "premier review team" of scientists at the top of their field. But these elites didn't protest plans to use bolts that the U.S. Department of Transportation considers to be subject to "brittle failure."

Others exhibit a sort of stuff-happens-nothing-we-can't-handle attitude. "Anytime you have a megaproject," said former Caltrans Director Will Kempton, "you run into issues of this nature. These are things that happen in construction. This bridge is really a one-of-a-kind bridge."

One of a kind -- somehow I don't find that reassuring. University of California, Berkeley structural engineering professor Abolhassan Astaneh-Asl believes that the cracked bolts should not have happened, but he believes that the state can fix any problems. "In engineering," he said, "there are always solutions. It's a matter of time, money and quality."

Time is a problem, too. The task force had announced that the new span will open on Labor Day weekend; now maybe it won't. I wonder whether a new panel of experts should sign off before the bridge opens. But a new panel takes time, and Heminger points out that delaying the opening is not a neutral choice. The current eastern span isn't safe. That's why the state is building a new one.

It's time for now-Gov. Jerry Brown to take charge and stop acting as though the Bay Bridge were someone else's problem. He's not responsible for bolts purchased before he took office, nor can he be expected to know about metallurgical issues in bridge construction, but it is his job to make sure the new span doesn't open unless it is safe.

And if he's not willing to go out on that limb, voters have no reason to trust him with the state's $68 billion high-speed rail project. Brown touted the project as befitting a "land of dreams," but dreams can turn into nightmares if they lack the right bolts.