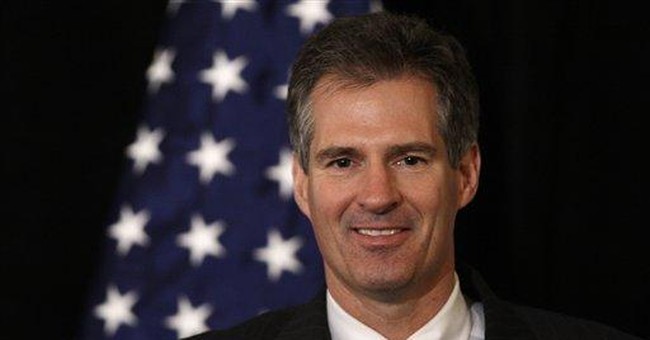 There are two ways to look at Republican Scott Brown's pivotal victory in the Senate race to represent Massachusetts. The voters looked at runaway spending in Washington and the corrupt deals cut to grease the support of key Democratic senators, government workers and Big Labor for Obamacare, and said, "Enough."

Fickle voters in a state that gave Obama 62 percent of the vote in November 2008 turned around and handed victory to a Republican, who pledged to block President Obama's health care package, because they voted in a knee-jerk response to this question: Whom do I hate the most today?

My guess is that the answer is: some of both. The cycle of voters rejecting the party they've put in power has accelerated. Party leaders can take the credit for this rejection, as they have been brazen in abusing power once they've secured it.

I have little sympathy for supporters who claim they are shocked that Obama has governed not from the center, but from the left. For the most part, Obama has delivered on his promises.

Granted, some of what Obama promised -- universal health care that would raise taxes solely for families earning more than $250,000 -- never could be delivered. But D.C. Dems could have put together something that was a lot less objectionable.

Team Obama has heaped the blame on Massachusetts Attorney General Martha Coakley for running a lame campaign. Coakley did misstep in claiming that al-Qaida was "gone" from Afghanistan. Worse (oddly), she expressed scorn to the Boston Globe for the very notion of campaigning like "standing outside Fenway Park" and "shaking hands." In any other year, the Democratic nominee could do far worse and win.

With polls showing public support for Obamacare trailing behind spirited opposition, the president needs to look at his own contribution toward electing the first GOP senator from Massachusetts since 1972. When the president agreed to exempt union and government workers from the Senate health care bill's proposed excise tax, his administration essentially waved the middle finger at the 87 percent of wage earners who aren't union members.

It was clear Obama didn't get it Sunday when he went to Beantown to stump for Coakley. He's no longer in a position to say he stands against "special interests." And he dissed Brown by saying, "It's easy to say you're independent and you're going to bring people together and all that stuff -- until you actually have to do it" -- without a touch of irony.

This is the same president whose favorite health care bill failed to woo a single Republican Senate floor vote. Do not tell me that Republicans would not negotiate with Democrats. The Healthy Americans Act -- a model for universal care without the employer mandate -- is sponsored by Sens. Ron Wyden, D-Ore., and Robert Bennett, R-Utah, and has more than 10 co-sponsors, including four other Republicans.

If Obama and the Democratic leadership had wanted to pass a truly bipartisan bill, they could have started with Wyden-Bennett. But they decided they wanted to be the lone, all-giving benefactors, with special treats for friends. They wanted all the glory, but they earned all the blame.

Canadian Pastor Dragged Off by SWAT Team Out on Bail Has a Warning for Americans
Townhall
CDC director: 'We now have science that has really just evolved'
Twitchy
CBS News Poll of Republican Voters Is Final Stake in Heart of Cheney's Efforts
Redstate
The Hamas Rocket Attacks Are Based on a Lie
PJ Media