What Happened to Global Warming? 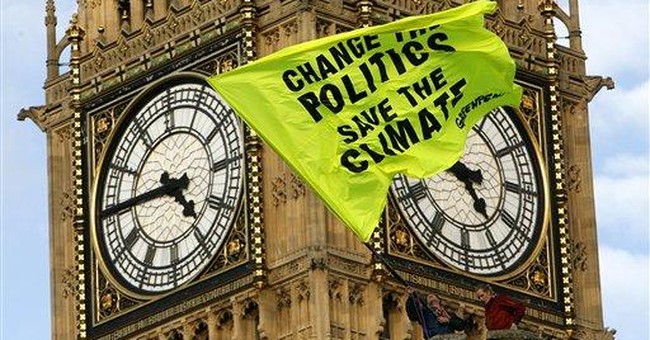 "What happened to global warming?" read the headline -- on BBC News on Oct. 9, no less. Consider it a cataclysmic event: Mainstream news organizations have begun reporting on scientific research that suggests that global warming may not be caused by man and may not be as dire and eminent as alarmists suggest.

Indeed, as the BBC's climate correspondent Paul Hudson reported, the warmest year recorded globally "was not in 2008 or 2007, but 1998." It's true, he continued, "For the last 11 years, we have not observed any increase in global temperatures."

At a London conference later this month, Hudson reported, solar scientist Piers Corbyn will present evidence that solar-charged particles have a big impact on global temperatures.

EPA analyst Alan Carlin -- an MIT-trained economist with a degree in physics -- referred to "solar variability" and Easterbrook's work in a document that warned that politics had prompted the EPA and other countries to pay "too little attention to the science of global warming" as partisans ignored the lack of global warming over the last 10 years. At first, the EPA buried the paper, then it permitted Carlin to post it on his personal Web site.

In May, Fortune reported on the testimony of University of Alabama-Huntsville Earth System Science Center Director John Christy's before the House Ways and Means Committee. Christy is a 2001 Intergovernmental Panel on Climate Change report signatory who believes human effects have a warming influence, but rejects the disaster scenarios.

As Christy told the committee, climate models rely on land temperature data that are distorted and exaggerated by surface development -- that is, asphalt and buildings. In a nice bit of research, Christy, who is also the Alabama state climatologist, debunked the temperature-increase predictions made by NASA scientist James Hansen in 1988. "The real atmosphere," Christy testified, "has many ways to respond to the changes that the extra CO2 is forcing upon it."

Add Christy, Easterbrook and Corbyn to the long list of scientists who see climate as a complex issue rather than an opportunity to sermonize and lecture the general public.

Over the years, global warming alarmists have sought to stifle debate by arguing that there was no debate. They bullied dissenters and ex-communicated non-believers from their panels. In the name of science, disciples made it a virtue to not recognize the existence of scientists such as MIT's Richard Lindzen and Colorado State University's William Gray.

For a long time, that approach worked. But after 11 years without record temperatures that had the seas spilling over the Statue of Liberty's toes, they are going to have to change tactics.

They're going to have to rely on real data, not failed models, scare stories and the Big Lie that everyone who counts agrees with them.