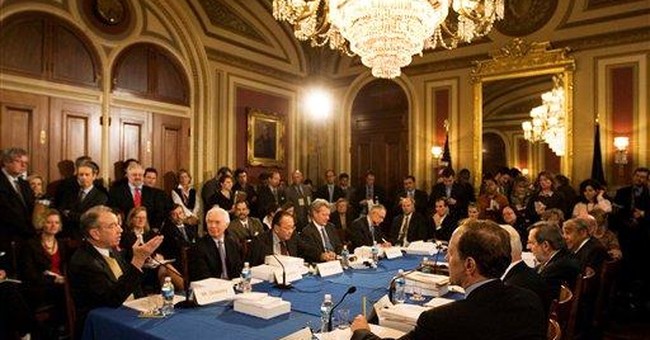 Quoth President Obama: "It's a little hard for me to take criticism from folks about this recovery package, after they've presided over a doubling of the national debt. I'm not sure they have a lot of credibility when it comes to fiscal responsibility."

By the time you read this column, there is no knowing what the size of Obama economic stimulus package will be. Just below $800 billion? A little more? Whatever the price tag ends up being, expect it to be a testament to the cynicism of D.C. Democrats.

Not that long ago, Obama and House Speaker Nancy Pelosi were taking potshots at President George W. Bush for supporting deficit spending. Now that they're in power, they're spending money at record speed that Washington doesn't have. And they're still blaming the Republicans.

Will they ever be responsible for the choices they make? I can understand Obama talking about the economic ills which he inherited in terms of Treasury Secretary Timothy Geithner's proposed $2.5 trillion bank bailout plan.

This is different. In November, the Obama stimulus package was supposed to cost about $300 billion. Now it has more than doubled in size.

Sure, as Obama noted, some of the president's Republican critics once supported big spending under George W. Bush. But there are high-profile Republicans -- think GOP 2008 nominee John McCain -- who fought against excessive spending in the Bush years. That is, McCain is being true to his principles in dismissing the stimulus package as "an act of generational theft."

As a rule, I don't criticize moderate Republicans who cut deals. After all, it's their job to work with others. But I don't understand how GOP Senators Susan Collins and Olympia Snowe of Maine and Arlen Specter can support a measure that grew from $300 billion to $838 billion.

Specter wrote in the Washington Post that he supported the package because America "cannot afford not to take action." No. America cannot afford a double-or-nothing roll of the dice that is sure to expand the deficit -- the deficit Democrats used to lament.

Just a year ago, Pelosi was demanding that the Bush stimulus package be "timely," "targeted" and "temporary." Now, undaunted by the questionable results of the $168-billion Bush "booster shot," Pelosi's three-word mantra is "more, more, more."

Now the idea of restraining spending is a joke. Obama countered critics of his over-spending recently, as he quipped, "What do you think a stimulus is? That's the whole point. No, seriously. That's the point."

During a campaign debate last year, Obama chastised McCain's plan to freeze domestic spending, when he said to McCain, "The problem is you're using a hatchet where you need a scalpel."

It turns out that when Obama was talking about cutting excess spending with a scalpel, he was using a shovel.